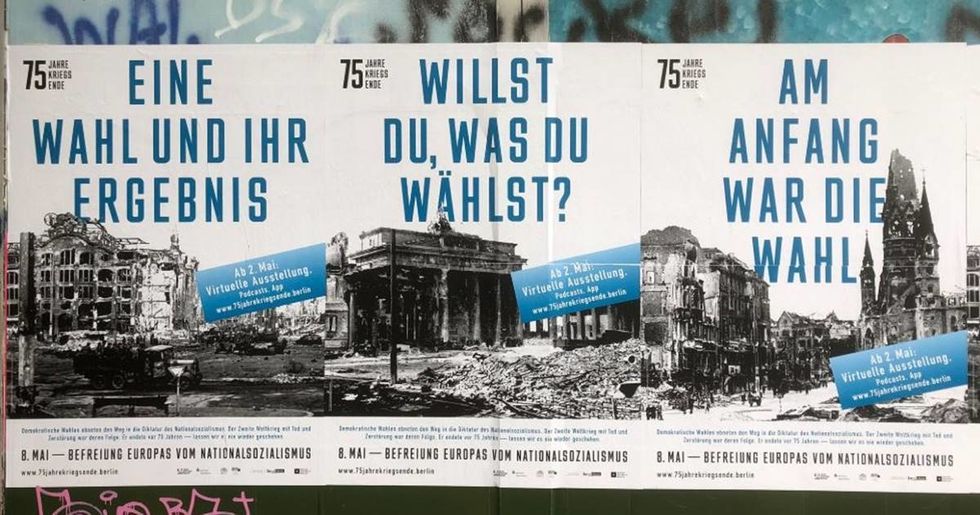 On May 8, 1945, Nazi Germany surrendered to Ally forces, thus ending World War II in Europe. For most of the world, it’s a day to celebrate, but for the German people, the day comes with a feeling of uneasiness.

May 8 has different connotations throughout the country. In the west, most people feel a sense of shame over the day. In the east, which fell under the power of the Iron Curtain, it was taught in schools as the “Day of Liberation” by Soviet forces.

For the 75th anniversary of the fall of Nazism, the city of Berlin is celebrating with a public holiday to mark the end of World War II for the first time. The holiday commemorates May 8 as a day of liberation from the forces of fascism.

The day was scheduled to have public events including an open-air exhibition and museum events. But they were canceled due to the COVID-19 pandemic.

Posters by Kulturprojekte declaring “In the beginning was a choice — a choice and a result” have been hanging around the city.

Kulturprojekte says the goal of its campaign is to remind Berliners that the Nazi regime came through Democratic means and “that it is the responsibility of everyone to ensure that history does not repeat itself.”

It believes that making May 8 a public holiday “offers the opportunity to send an unmistakable message against fascism and war and for peace.”

“We are also keen to reach a young audience, particularly those with a migrant background, who have little knowledge of German history,” Moritz van Dülmen, the head of Kulturprojekte, told the BBC.

“It’s the principles of democracy that we want to get across,” Dülmen added.

There is also a movement to make May 8 a national holiday celebrating the liberation of Germany from Nazis. Holocaust survivor Esther Bejarano, 95, wrote an open letter to German Chancellor Angela Merkel pushing for May it.

Over 100,000 people have signed her petition for a holiday that would commemorate “a day of liberation and the crushing of the National Socialist regime.”

“You can’t make May 8 a happy day for Germany,” Gauland said. “For the concentration camp inmates, it was a day of liberation. But it was also a day of absolute defeat, a day of the loss of large parts of Germany and the loss of national autonomy.”

As right-wing nationalism spreads across Europe, it’s essential to keep the lessons learned during World War II from falling by the wayside. The biggest opposition party in Germany right now is the AfD, a right-wing nationalist party that has downplayed Nazi atrocities and has declared to fight an “invasion of foreigners” into the country.

Kulturprojekte’s May 8 campaign is to remind Berliners that living in a democracy doesn’t inoculate Germany form the forces of fascism. There’s never been a better time to remind them than now.