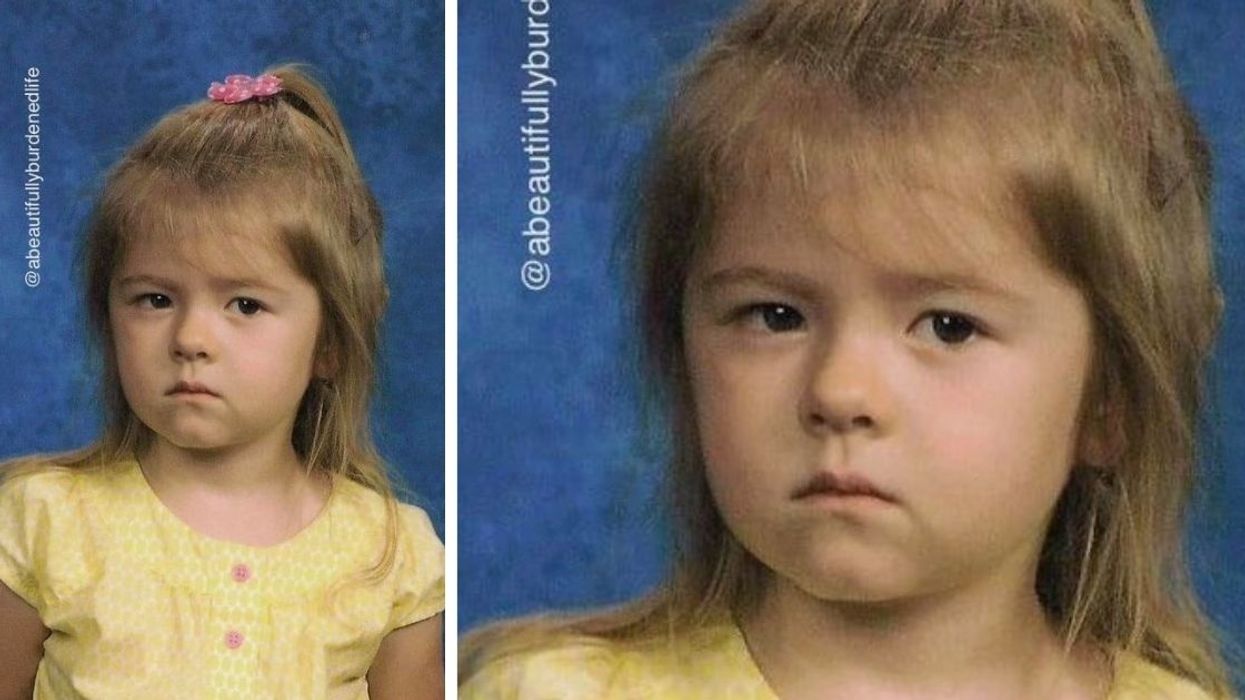 Ah, the awkward joy of school picture day. Most of us had to endure the unnatural positioning, the bright light shining in our face, and the oddly ethereal backgrounds that mark the annual ritual. Some of us even have painfully humorous memories to go along with our photos.

While entertaining school picture day stories are common, one mom’s tale of her daughter’s not-picture-perfect school photo is winning people’s hearts for a funny—but also inspiring—reason.

Jenny Albers of A Beautifully Burdened Life shared a photo of her daughter on her Facebook page, which shows her looking just off camera with a very serious look on her face. No smile. Not even a twinkle in her eye. Her teacher was apologetic and reassured Albers that she could retake the photo, but Albers took one look and said no way.

“Her teacher held the oversized envelope tightly against her chest. She grimaced and said “I’m sorry” upon handing me the packet containing my daughter’s first-ever school pictures.

“Retakes are next month,” she continued. Her tone was a warning that disappointment awaited.

“They’re that bad, huh?” I responded, before lifting the flap to peek inside the envelope.

The teacher gave me a half-nod and said, “we tried.”

I assumed my daughter’s eyes were closed or her hair had streaks of finger paint in it. Heck, maybe there was even a booger dangling from her nose. I mean, you can’t really expect toddlers to stay clean and tidy for more than a fraction of a second.

“Geez, her teacher seems really concerned,” I thought, and wondered how a school picture could possibly be THAT awful.

I reluctantly slid one of the photos halfway out of the envelope and whatever concern there had been immediately dissolved.

I laughed. Hard. My heart was overflowing with all the best things at the sight of this image.

Because this is my daughter. The real her. Eyes open and unamused by whatever nonsense was taking place in front of her.

I imagine she was facing a photographer who was trying to coax her into a feigned smile by waving around a floppy stuffed dog, or making bad jokes, or acting like a total goofball in an attempt to gain her favor.

But really, it was probably the baby talk that caused this expression on her face. Because this child has always met baby talk with utter disdain.

Whatever it was, she will not be made a fool of. Such behavior is beneath her.

She saves her smiles for things that speak to her soul. And there are A LOT of them. Just not school picture day thinly veiled under the façade of fun.

She doesn’t do phony.

And that’s okay with me.

I just pray she stays that way.”

Now that is a fabulous school picture story.

Some kids are just born with an “I don’t do b.s.” vibe, and when you meet them, it’s both refreshing and unnerving. We expect children to be simple and easy to manipulate and eager to please, but they are as diverse as the rest of us, and they are who they are. Hearing about Albers’ daughter saving her smiles “for things that speak to her soul” and “school picture day thinly veiled under the facade of fun” not being one of them, and then seeing this photo go along with that description, it’s so clear that this kiddo is beyond her years in at least one way. Her face shows what most of us would be thinking if someone tried to talk baby talk to make us smile. But to see that face on a little kid is so funny.

Keep on being you, little miss. And well done, Mama, for celebrating your daughter being comfortable in her own personality and not changing herself to please the random guy with a toy dog and a camera.