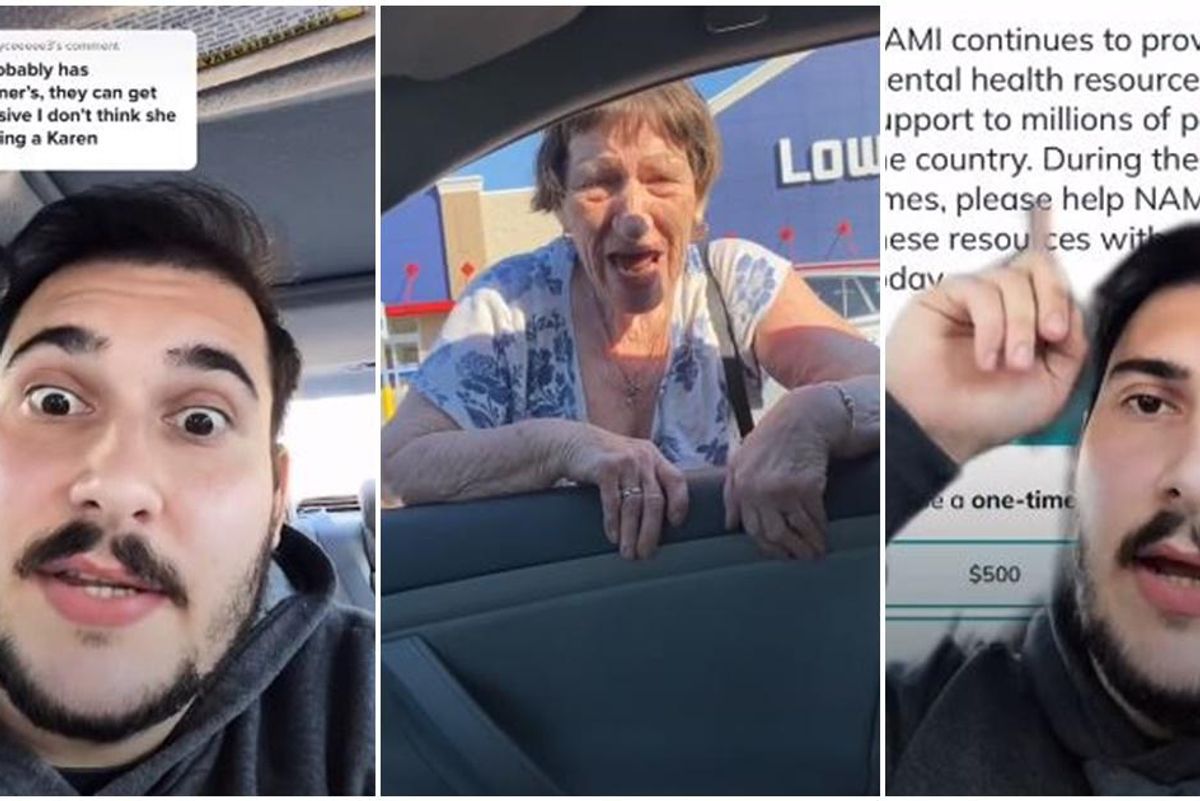 Guilherme Peruca turned on his camera’s phone and started recording after an elderly woman began screaming at him through his passenger side window in a Lowe’s parking lot. The woman was accusing him of stealing her friend’s car, but she was mistaken.

“I need help!” the woman yells outside of his passenger side window. “Someone’s trying to steal my best friend’s car.”

When Peruca told the woman the car was his she yelled back, “Get outta here” as she tried to pry open the door.

“He’s stealing this car, it’s not his!” the woman continued. “I don’t care what he says!”

Eventually, a Lowe’s employee intervened to sort out the situation. Peruca showed her his driver’s license and car registration to prove the vehicle was his and then the employee calmly guided the woman away.

Peruca didn’t need to show her his paperwork but he did so anyway just to deescalate the situation.

I just wanted some tools at the hardware store 😅 #fy

Peruca later posted a video of the incident to TikTok where it’s been viewed over 18 million times. Many people have praised him and the Lowe’s employee for remaining calm during the incident. Peruca could have easily gotten upset with the woman for making such a terrible accusation, but he didn’t.

His actions are also admirable because the woman put him in danger by making the false accusation. What if someone in the parking lot believed he was stealing an elderly woman’s car and assaulted him to stop what they thought was a robbery?

The situation could have got a lot worse if someone called the police and they thought that there was a crime taking place.

The video received a ton of comments, most were praising Peruca and the Lowe’s employee.

“As funny as the Lowe’s employee asking for license and registration is, she handled the entire situation so professionally and was respectful to both,” Jackthe Daniel wrote.

While some people called the woman a “Karen” for accusing a person of color of theft when he was just going to the hardware store, others believed that the woman was suffering from some form of dementia.

“She probably has Alzheimer’s, they can get aggressive. She wasn’t being a Karen,” Jaycee wrote.

Peruca later posted a follow-up video where he said that he didn’t believe she was a “Karen” and that she probably had a mental disorder. So he decided to turn the viral video into something positive by asking people to donate to the National Alliance on Mental Illness

“We’re human. And since we’re human we can do stuff together, you know?” he said in the follow-up video.

The video has received millions of views so it’s great that Peruca explained that the woman probably had mental illness instead of just calling her a “Karen.” His decision may help other people realize that when an elderly person is acting aggressive, it may not be out of malice, but due to a mental health issue.