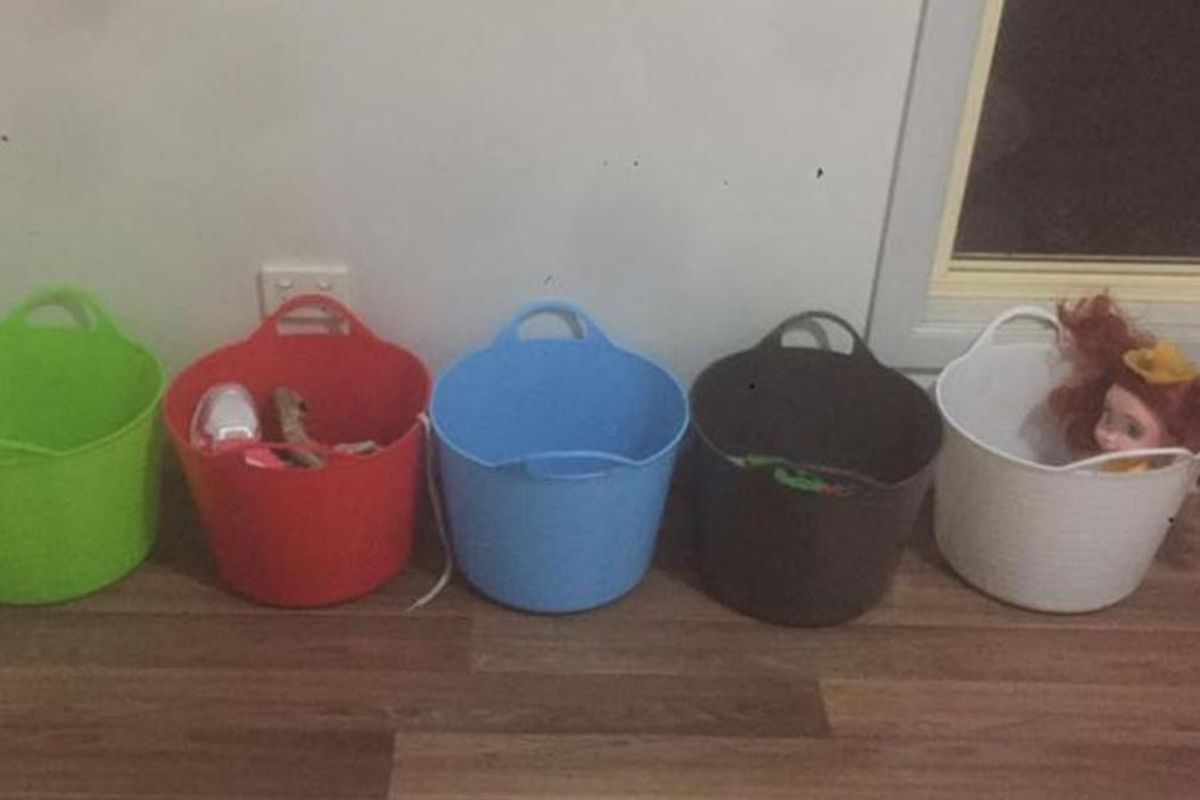 It’s nearly impossible to keep a clean house for more than an hour when you have kids, and the more you’ve got, the worse it gets. Unless you have perfectly trained children, you’re always having to nag them to clean up after themselves.

Jessica McGinty, who posts as Mishmash Moments on her Facebook blog, found a solution to picking up after her kids and it stirred up some passionate debate. McGinty has a blended family and is raising five kids all under the age of nine. So you can imagine how impossible it must be to keep everything tidy.

McGinty came up with the ingenious idea of the “fucket bucket.” She has a bucket for each child in the living room and when she sees something lying around, she drops it in the bucket. If the kids haven’t put the contents of their buckets away by the time they go to bed, it gets thrown away.

“If they leave it laying around, it goes in their bucket. If it’s still there at bedtime it goes in the bin because fucket if I’m cleaning it up,” McGinty wrote on Facebook.

Like anything parenting-related, the post stirred up a bit of controversy. Michelle thought the idea was solid but that McGinty should probably have a name for the bucket that is a bit more kid-friendly.

“The idea is great but perhaps the name isn’t appropriate … what about renaming them ‘chuck-it’ buckets instead,” Michelle wrote.

McGinty cleared things up by telling her that she doesn’t use the F-word around her kids.

Amy thought it was a good idea to use for her husband, too.

“I have given my husband one of those boxes, minus the part about throwing it out,” she wrote. “He is always accusing me of moving his stuff. If it’s laying around, it goes in the box.”

Another commenter thought it was a bad idea.

“Makes zero sense, if you’ve made the effort to move it into the bucket, surely it could have been moved into a toy box,” Belinda wrote. “Just throwing your own money away.”

The idea made another mother irate.

“I couldn’t care less how messy my children were, I’d never disrespect them like this,” Claire wrote. “Shocked people seem to think throwing away other people’s belongings without their consent is a good thing. Great job setting an example of how to treat other people!”

Regardless of what other people think, McGinty says the buckets have been a game-changer in her home. “We’re a blended family of five, nine and under–nine, seven, seven, six, and two. It’s working well so far. I can wander around and pick up any missed things and drop them in the buckets and the kids love them, knowing exactly where things they’ve missed are,” she told Scary Mommy.

People can disagree all they want about the tactics parents use to raise their kids. But in the end, it’s all about the results. McGinty may have gone to extremes to get her kids to be responsible and clean up, but her home and her sanity will be all the better for it.