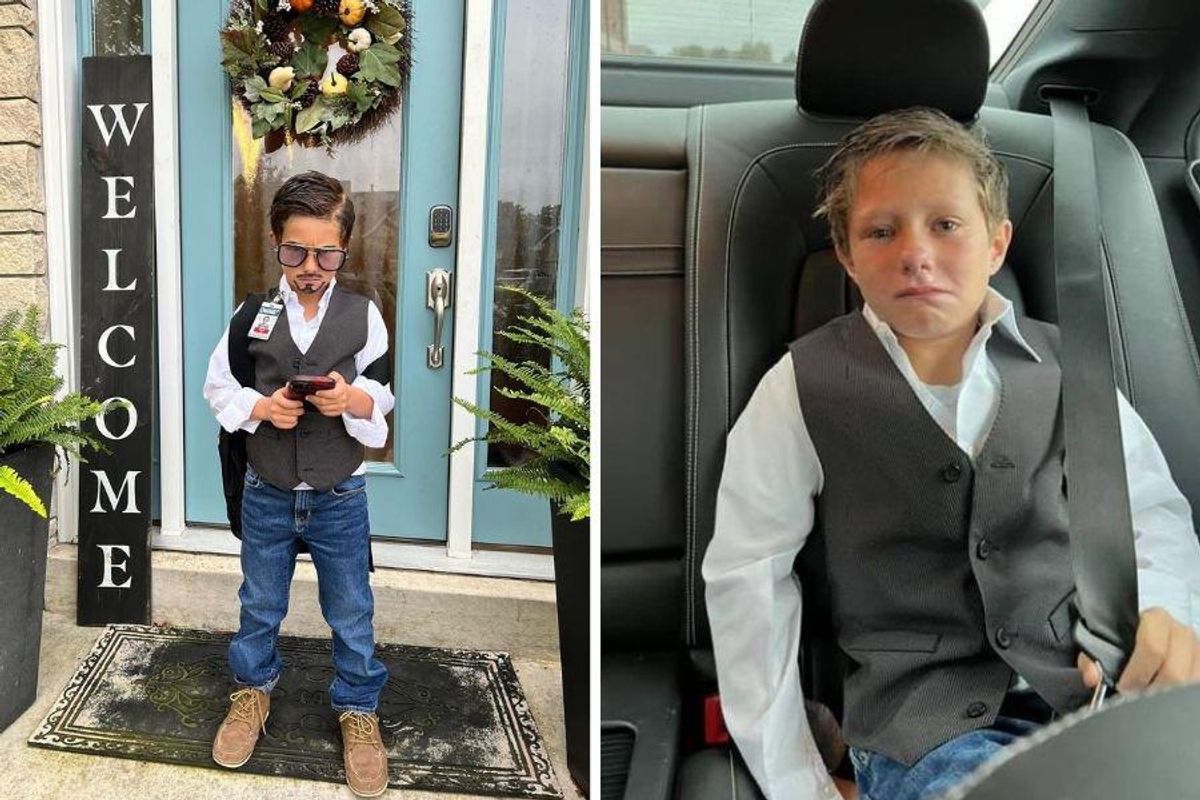 It can be hard for anyone to bounce back after being ridiculed, but especially a kid who is just figuring out how to make their way in this wacky world. Bullies only succeed when we change our behavior because of them, so it’s important that we don’t let jerky behavior keep us down and destroy our joy.

It all started with Evan preparing for his school Halloween party by getting decked out in a sweet Tony Stark costume, complete with facial hair makeup, glasses and pomaded hair. His mom, Jill Struckman, shared photos of him in his costume on Facebook.

True to Tony Stark style, Evan wanted to be driven to school in the family’s Mercedes, but his mom wasn’t able to take him so he had to take the school bus.

“He was over the top excited about his costume…” Struckman wrote in another post. “He couldn’t stop smiling when he left home.”

Unfortunately, that excitement was ruined by some kids on the school bus who told him he looked stupid.

“Evan got to school and immediately went to the bathroom and washed his face,” Struckman wrote. “When he called he was crying and sooo hurt that he didn’t even want to stay for his party.”

“Kids need to understand that WORDS hurt,” she added.

After she got the call from the school, Struckman picked Evan up and took him out for a treat and a talk. She told TODAY Parents that Evan kept apologizing for washing his makeup off. “He kept saying, ‘we worked so hard on it,'” she said. “He was really thinking about how I would feel, which tells you a lot about him.”

Sometimes a little TLC from mom and a little space from the situation (and a little Starbucks as well) is enough to help a person rally, though.

“After going to Starbucks and talking through his feelings, Evan decided he didn’t want to miss his school party!!! So we went home and redid his AWESOME makeup and marched right back into school!”

“He was a little scared walking back into school,” Struckman told TODAY. “But he had a great rest of the day. And he was so proud of himself. It was absolutely a defining moment in his life. If he hadn’t gone back, it would have broken his spirit.”

Struckman shared in another post that Evan is a kid who usually enjoys standing out. “This boy has swagger and usually doesn’t let things that people say get to him,” she wrote. “I don’t want him to ever lose that and for a minute I thought he had let others’ opinions get the best of him and it crushed me!”

She also wrote that she doesn’t think the kids who bullied him are evil. “I think one kid said something mean and that others got caught up in it and it snowballed from there. It’s another important conversation we should all be having with our kids—DON’T just go along with something you know is not right… I think all kids just want to fit in and sometimes that might mean agreeing with something you know is wrong.”

Struckman’s posts on Facebook have received overwhelming attention, with thousands of comments of support pouring in. She says she’s also received countless messages from all over the world, as well as offers to send Evan money. He doesn’t need cash, she has said, requesting that people make donations instead. However, for the people asking if they can send him a card, she provided a PO box number.

What a great example of resilience on Evan’s part and loving support on his mom’s part. Bullying only prevails if we let it. Good job owning your own self, Evan. And good job, mama, for teaching your kid to be compassionate even as you teach him to stand up for himself.