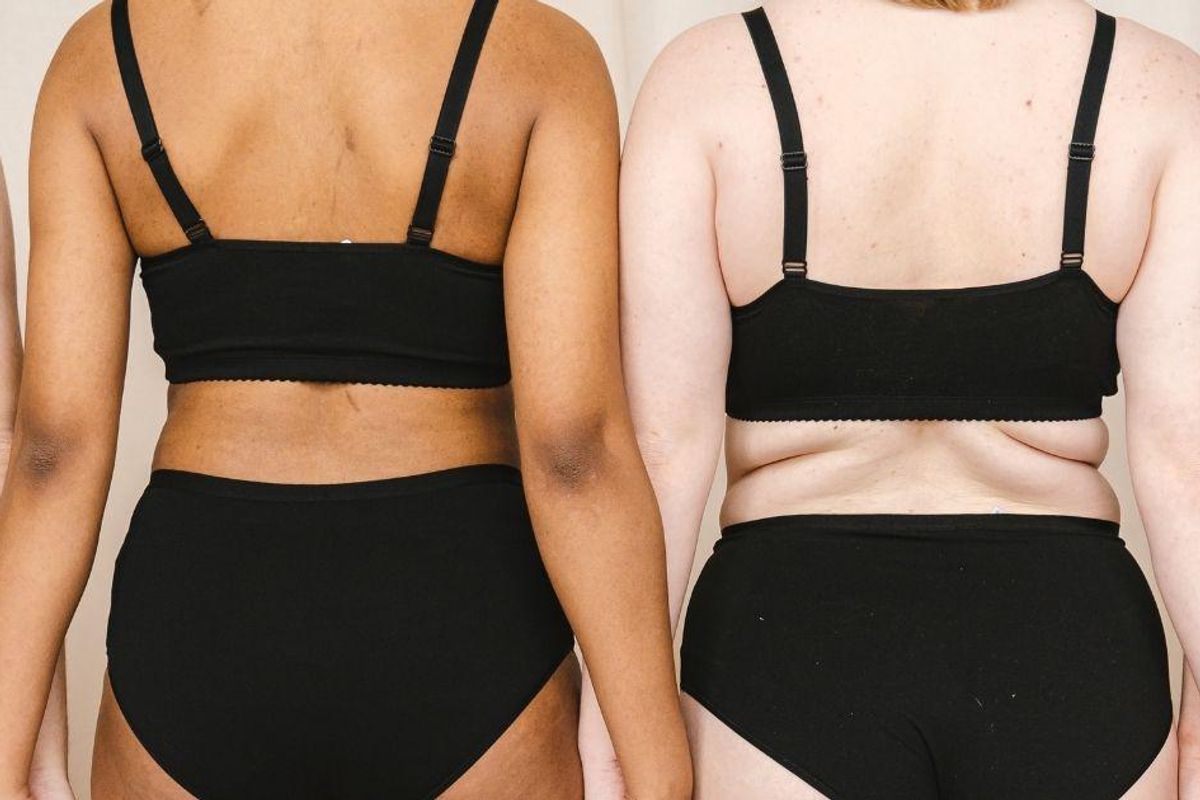 As a middle-aged woman, I’ve spent decades battling for my body. I have become a skilled fighter against the advertising industry, the entertainment industry, the fashion industry, the beauty industry and the fitness industry. I’ve learned to fend off societal expectations, language norms, social media filters and even my own brain, simply to exist in peace inside my own body.

It’s not a war I chose to wage, but one I was born into. From infancy, magazine covers at grocery store checkouts and billboards along highways have bombed me with messages about bodies and beauty. It’s been a daily assault my whole life, boom after boom after boom.

I’m also a mother of three who didn’t want to hand this “forever war” down to her children. My own mom served as an excellent example on the body image front, which gave me a tactical advantage for which I’m grateful. But I knew the bombardment from the outside world would hit my kids just as it hit me, and I vowed to prepare them as best I could.

The first thing to know is that the enemy in the body image war is sneaky, relentless and everywhere. It’s in every message that tells us we’re too fat, too skinny, too curvy, too flat, too tall, too short—or not enough of any of those things. “Too” and “not enough” are its weapons of choice and boy are they effective, targeting with perfect precision the part of us that wants to belong, to be accepted, to be loved.

In a war, we can deal with an enemy attack in two ways: take cover or fight.

Body positivity is a weapon we use to fight body negativity. The enemy says “Your tummy’s too flabby,” and we fire back with “No way, my belly is fabulous!” The enemy says “You need to lose weight” and we fire back with “Screw you, my body is gorgeous!” The problem with fighting body negativity with body positivity is that it means constantly engaging in battle. One side hits, the other side hits back. Even when you’re winning the battle, it’s exhausting.

Body positivity can be especially problematic when it comes from other people. Jonah Hill recently spoke to this issue, asking people to stop commenting on his weight loss, either negatively or positively. “I know you mean well but I kindly ask that you not comment on my body,” Hill said in a post on Twitter. “Good or bad I want to politely let you know it’s not helpful and doesn’t feel good. Much respect.”

That message is so simple—I know you mean well, but your positive messages about my body are not helpful.

Those messages aren’t helpful because what they say to the person is “Someone is judging my body.” Judgment itself is what keeps the war going, whether it’s others doing it or us doing it to ourselves. Real freedom lies in dropping the judgments altogether. That’s where body neutrality comes in.

Body neutrality means moving away from judgment altogether and taking a neutral view of our body. It’s not “good” or “bad,” it’s not “ugly” or “gorgeous,” it just is. Instead of asking how our body looks and going with a negative or positive judgment as the answer, we ask different questions to determine if anything needs to be adjusted: How does my body feel? Does it function well? Is it fulfilling its purpose, enabling me to move around, enjoy things and be of service in this world?

Very Well Mind offers a description of it:

“Body neutrality means taking a neutral perspective towards your body, meaning that you do not have to cultivate a love for your body or feel that you have to love your body every day. You may not always love your body, but you may still live happily and appreciate everything your body can do.”

Body neutrality serves as a shield against body negative messaging. It allows us to put down our weapons and walk away from the body image war, largely unscathed by the bombardments of the enemy. It’s not putting up a white flag and surrendering to body negativity; it’s becoming Switzerland in the face of it. It’s simply saying, “Yeah, I’m not going to do this anymore.”

Body neutrality sounds simple enough, but it’s not necessarily easy to achieve considering how trained we are to judge. Once we do achieve it, though, the result is liberation.

My biggest body neutrality epiphany hit some years ago when I saw that women were spending gobs of money getting butt implants. I had spent so much of my teen and young adult years lamenting my “child-bearing hips” and formidable derriere in the face of tiny-bottomed models, and now suddenly having some trunk junk was all the rage? That’s when I truly internalized the reality that it’s all bullshit. All of the judgments and the subconscious thinking about what’s ideal or desirable—it all went out the window because it’s based on literally nothing.

Personally, I don’t think we have to never think about our bodies at all. I think about my body daily because I want to feel good and have energy. I know that what I do with my body impacts those things, so I pay attention to what I’m eating and make sure I’m getting enough movement, considering my sedentary job—but I can do all that from a place of gratitude for what my body enables me to do, rather than a judgmental analysis of what my body is or isn’t.

I also don’t think we have to throw the baby out with the bathwater here. Body positivity has been life-changing for some people, and body neutrality might feel unnecessary for people who honestly feel awesome in their own bodies and want to celebrate that. For me, there’s a place for body positivity alongside body neutrality. Putting on an outfit that fits just right and saying, “Dang, lookin’ good” is fun. When used as a genuine celebration instead of as a reactionary weapon, body positivity is healthy, in my experience.

What all of this really comes down to is that truly being at peace in our bodies doesn’t come from constantly fighting negativity with positivity, especially in a war over body image that truly has no end. The commercial machine will continue to do what it does best—tell us we should feel insecure and then prey on those insecurities. We can fight back with opposite messaging—and sometimes that might be a reasonable strategy—but we have to realize that judgments, good and bad, just keep the war going. Perhaps a better strategy is to decide the fight simply isn’t worth it, lay down the weapons and walk away from the battle altogether.

I have a body that lets me live in this world. That’s neat. I’m thankful for it. End of story.