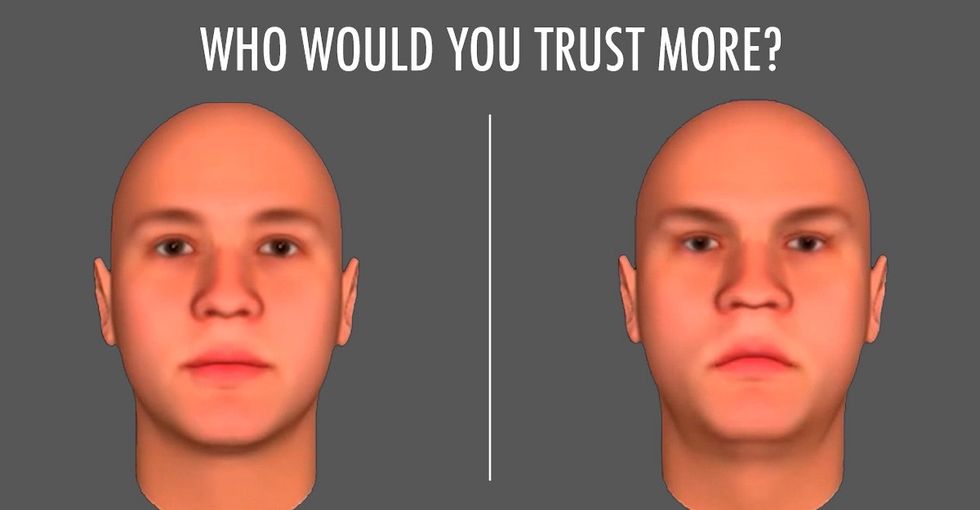 This article originally appeared on 10.18.14

William Haynes wants to talk to you about your brain.

He’s a comedian for SourceFed, and he’s got kind of a strange, dark sense of humor.

See what I mean?

So when he was invited to host an episode of Discovery’s “DNews” about the science of first impressions, we knew it was going to be awesome.

Here’s what he had to say.

Your brain can decide how trustworthy a person is just by getting a split-second look at their face.

Researchers, in a study published in the Journal of Neuroscience, found that our brains help us form all kinds of spontaneous judgments of people that we may not even be aware of, including whether we can trust them.

It’s all thanks to the amygdala, the walnut-shaped area of the brain that helps us process strong emotions.

In the study, two groups of participants were analyzed. The first group was asked to rate how much they trusted certain people by looking at their faces while the researchers measured activity in the amygdala. Simple enough.

The second group was asked to lay inside an MRI machine while faces flashed on a screen in front of them. But here’s the catch: The faces appeared and disappeared so quickly that the people in this group couldn’t even really see them.

Here’s what the study found.

Regardless of whether you get a long look at someone’s face or only a glance, your amygdala lights up like crazy.

What’s even cooler is that participants in the study pretty much agreed on which faces were trustworthy and which ones weren’t.

There were certain traits that stood out as shady, like furrowed eyebrows and shallow cheekbones, in particular.

This only begins to scratch the surface of the super-awesome science behind first impressions.

Did you know that a person’s voice can have a similar effect on perception, even in small doses?

After testing a group of 64 people, researchers in Scotland found that participants were consistently able to agree on which personality traits corresponded to which voices they heard — based solely on hearing them speak the word “hello.”

The biggest remaining question is whether these snap judgments have a measurable impact on our behavior.

A study by Nalini Ambady and Robert Rosenthal found something pretty interesting.

According to Lifehacker, the two compared “the ratings given to college professors by classes at the end of the semester with ratings that another group of students gave the same professors based only on three ten-second silent video clips shown prior to any actual lectures.”

The two groups mostly agreed on how much they liked the professors, indicating that, just maybe, first impressions really do matter.