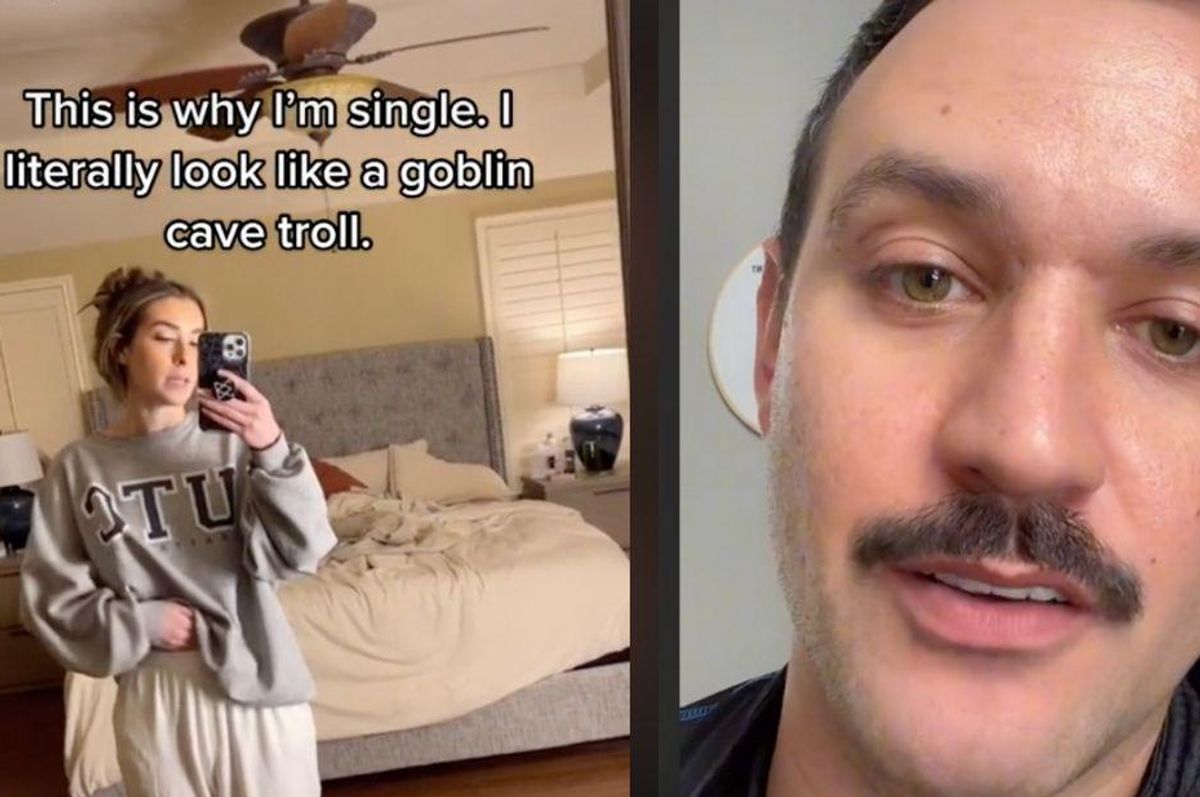 “Look it’s not in my nature to gatekeep this close to the sun but ladies, you have got to be easier on yourselves.”

With his endearing Ted Lasso mustache and Ryan Reynolds dorky charm, Andrew, @andre3wsky on TikTok, is no stranger to gifting the world comical, well-loved videos. One of his latest is a response to a girl who posted a TikTok of herself in sweatpants, declaring to the world that she’s single because she looks “like a goblin cave troll.”

Sorority girl who slept in? Maybe. But goblin cave troll? That’s a little much.

Unafraid to let his nerd flag fly, Andrew argued that “just throwing on a pair of sweatpants doesn’t suddenly make you a threat to a group of low-level adventures. You have no idea the depths of goblin troll-dom us men inhabit on a daily basis. You are but travelers in a strange and distant land.”

Clearly someone has played a campaign or two of Dungeons and Dragons. But I digress.

Andrew continued: “Look at this woman. She’s doing amazing. Her clothes aren’t evening wear but they’re clean. The other day I used a T-shirt as a rag when I changed my oil. Wore it the next day.” He added, almost proudly, that he didn’t even wash it.

He also noticed how the supposed cave troll’s bed “might as well be the bed of European nobility” since it had a bedframe, sheets, and most luxurious of all, a mattress. I couldn’t believe he failed to mention the two, I repeat, TWO matching lamps on either side of the bed. Sitting on two matching nightstands, no less.

“She’s not sleeping on a pile of clean clothes that she refers to as ‘the nest,'” Andrew continued, sharing that “in undergrad I had four pieces of furniture, if you include ‘the nest.’ The other ones were a television, a PlayStation 3 and a minivan seat I found on the curb when I moved in. People still slept with me.” Viewers found that last line especially hilarious.

One person wrote, “I literally lived in a large cardboard box next to an alley. Rats under the floor constantly. Beautiful women still slept with me.” Um, wow … good for that person.

Many commenters were quick to accuse the woman of fishing for compliments, and where this is maybe (probably) true, the double standard between men and women is still very existent. Comedian Iliza Shlesinger has made entire stand-up routines about it, including a fan favorite bit where she goes into how men and women eat during a date.

In the bit, Iliza states that “society dictates that guys can do whatever they want and girls have to be dainty, so he’s gonna get fries, a burger, half a gazelle. Girls, you get the menu and what are you ordering? A salad.”

This joke was featured in Shlesinger’s Netflix special “War Paint,” which premiered in 2013. And yet here we are eight years later still calling ourselves monsters, in an attempt to gain attention and validation from the outside world. But hey, without insecurity, we wouldn’t have comedy, right?

To the TikTok informants warning Andrew that he might have succumbed to the girl’s fishing for compliments, the eternal optimist says “That’s okay. Compliments are easy and free. If someone wants one, I’m happy to give it (and also I’m an expert fisherman).”

Check out more TikToks from Andrew if you’re looking for a reason to smile today.