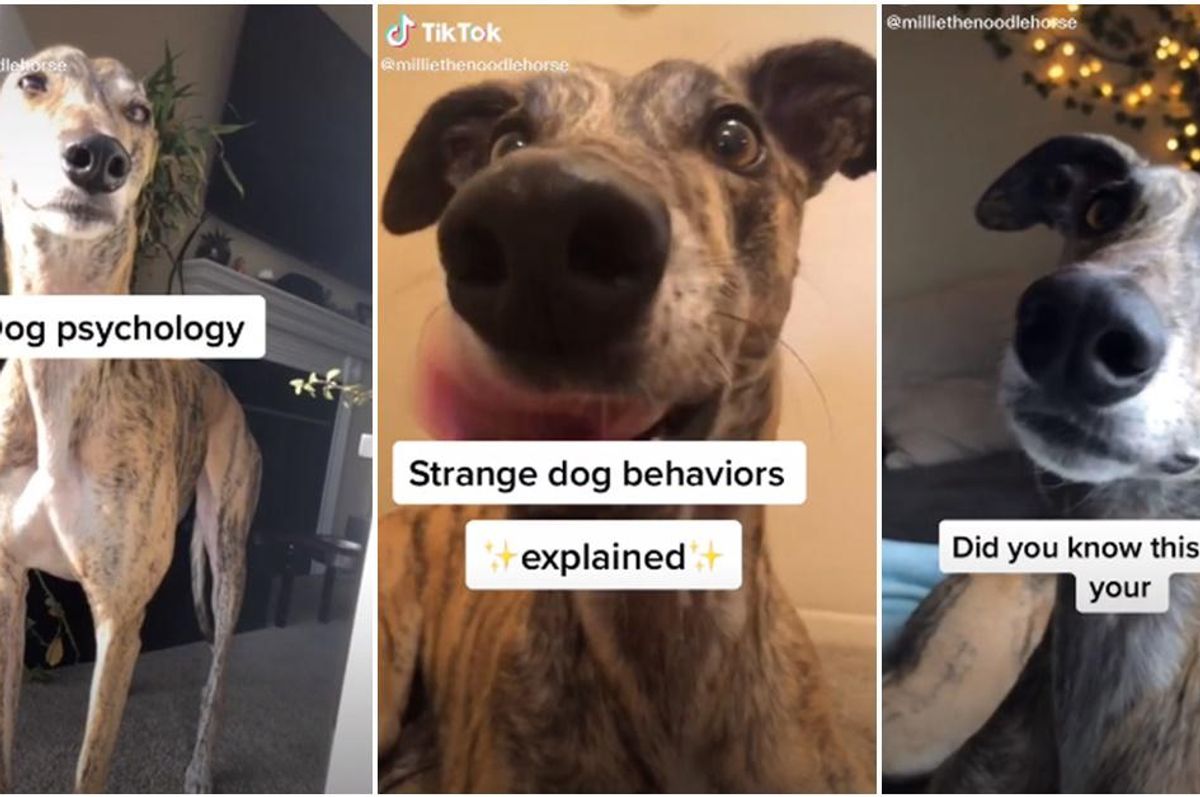 One of the most humane trends in the past 30 years of American life has been the decline in greyhound racing. After hitting its peak in 1985, state laws have led to the closure of racetracks across the country.

By the end of 2022, there will only be two active greyhound tracks in the United States, both in West Virginia.

The change in attitudes toward dog racing has meant an increase in greyhounds being rescued and living second lives as family pets. Greyhounds are great around children, have happy dispositions and, even though they’re fast on the track, they don’t require a lot of exercise.

This has led them to have the nickname the “45 mile-per-hour couch potato.”

So it wasn’t long before Millie became one of her subjects of study.

“Psychology is a major aspect of my career and has always been a fascination of mine,” she told Bored Panda.

After adopting Millie, Huerta realized that her dog was anxious so she put on her therapist’s hat and began learning all she could about dog psychology.

“From separation anxiety to social anxiety, I got a first-hand glimpse into the psychology of a dog. It became my passion to educate myself on [the subject], and through many hours of research, I gained a better understanding of Millie,” Huerta explained.

She began posting videos on social media to help bridge the gap between humans and their fur babies. Heurta calls Millie a “noodle horse” because of her equine-looking features and spindly limbs that contort themselves into impossible shapes.

The result is a series of super-cute videos featuring Millie that are so popular, the MillieTheNoodleHorse TikTok page has more than 1.2 million followers. Here’s a selection of some of the cutest and most informative videos that’ll teach you a bit more about your four-legged friend.

When dogs lean on you, it’s a hug.

If your dog has quick bursts of energy, it’s a good thing.

A crotch sniff is a health check-up.

Why do dogs tilt their head while looking at people?

Why do dogs get so excited when their owners come home?

When a dog sleeps with your clothing, it’s a beautiful thing.

When a dog licks your cut, they’re playing doctor.

Huerta and Millie are doing an incredible job of making dog psychology fun and informative. Their TikTok page is a great way to help spread awareness about our incredibly adorable, yet complex, four-legged friends. The better we understand one another the more wonderful and fulfilling our relationships will be.