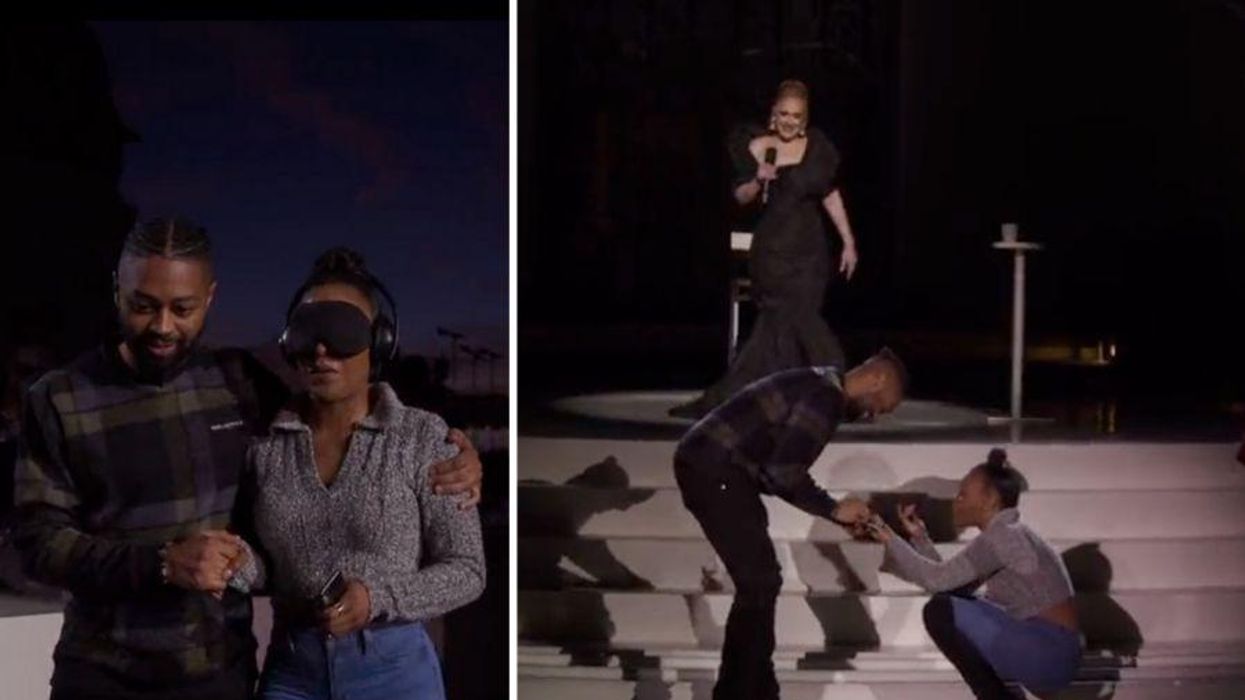 Last night, Adele’s first live concert in four years aired on CBS, and it was a night to remember for more reasons than that.

Held at the beautiful Griffith Observatory in Los Angeles, the concert was a star-studded event with gorgeous views of the city. Hearing and seeing Adele sing in a stunning black evening gown while the sun set behind her felt almost indulgent in its perfection, but the night was made even more special with a surprise proposal Adele helped orchestrate.

After Adele told the audience to be “really bloody quiet” and had the lights turned down, Quentin Brunson led his girlfriend, Ashleigh Mann, to the front of the stage. She was wearing noise-canceling headphones and a blindfold and had no idea where she was. When she took them off, she found Quentin down on one knee. She could see and hear the crowd, but it wasn’t until after Quentin went through his tearful proposal that Ashleigh found out where she was and who she was with.

New life goal: Get engaged in front of @adele. pic.twitter.com/ybfa922aHg

Can you even imagine? “What is happening? Where am I? OMG, I’m getting engaged! Oh, Adele—HELLO! What? I’m on you’re ‘One Night Only’ special that millions of people around the world are going to be watching on television? Take a seat in the front row, you say? Right here between Lizzo and Melissa McCarthy? UM, OKAY. Oh, you’re singing to me now. Am I dreaming?”

How does one even take in such an experience? It was all so beautiful and clever and surprisingly real. Ashleigh’s “Oh my god, I’ve been your girlfriend for so long” and her “In real life?” during the proposal and her simple, “Yeah” that sealed the deal were so dang cute. But her face when she saw Adele was absolutely priceless. And then Adele’s cackle—AH HA!

The performance of “To Make You Feel My Love,” just iced the cake. So, so sweet. We’re all wiping our eyes with you, Melissa McCarthy.

Quentin and Ashleigh were interviewed by Gayle King on CBS This Morning and shared how the proposal came to be:

Ashleigh said she thought they were going to go on a hayride because they had been talking about going to a pumpkin patch. Ha.

Quentin himself didn’t even know the surprise proposal opportunity was going to involve Adele herself until a couple of days before it happened. And the couple has had to keep the whole thing a secret since the filming—even from their friends and family—which had to have been torture.

What a fun and memorable night. Even people who aren’t fans of public proposals gave props to the surprise. Any proposal that involves Adele singing directly to you in person is pretty much impossible to criticize and impossible to top.

Congratulations to the happy couple!