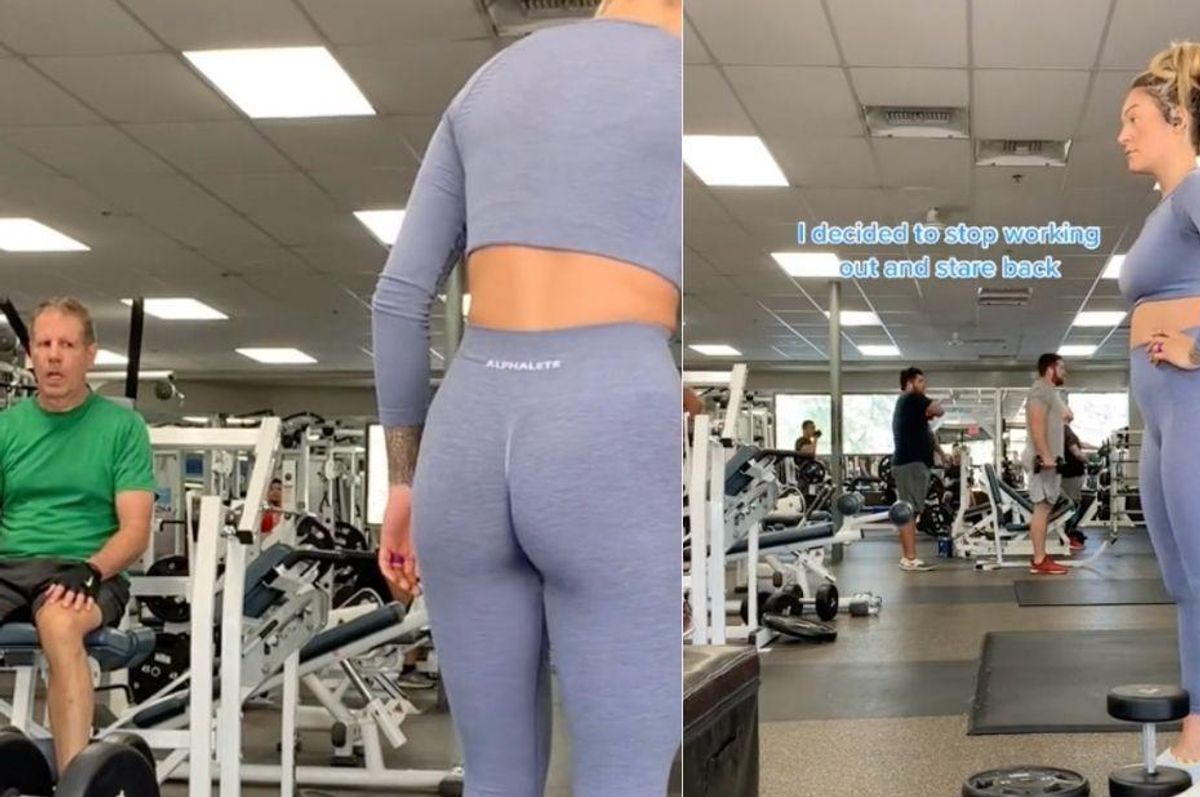 When lifting weights at the gym, the discomfort you feel should be coming from the workout. Not from other people with no concept of boundaries. However, this is an all-too-common occurrence for women.

Personal trainer Heidi Aragon (@fit_with_heidi) is used to sharing her fitness journey on social media. Her video, which has now garnered more than 8 million views on TikTok, didn’t go viral because of the workout. Instead, people are responding to how she confronted a man who not only wouldn’t stop staring at her, but denied the fact that he was. Until Heidi beat him at his own game.

Heidi explains in the text video “This creepy old guy at the gym kept coming over and staring at me.” Sure enough, the video shows a man in a green shirt, eyes undeniably fixated on Heidi. Uncomfortable, Heidi tries to get her husband to stand between her and the man, hopefully laying down a not-so-subtle cue to back off. But subtlety is clearly not this guy’s language.

So what does Heidi do? She stares back. The strategy seemed to work, at least for a while, but eventually Heidi had to go over and confront the guy directly.

Her video text read: “I told him if he’s going to work out in this corner he needed to stop staring and making me uncomfortable. His response was, ‘I’m just looking around.’ I then told him I record my workouts and I have him on film. He shut up real quick.”

@fit_with_heidi Don’t sit there and tell me you’re not doing something when I have proof. 😡 #gymtok #fittok #influencer #viral #trending #tiktok #fitness #gym #gymgirl #fyp #fypシ #foryou #foryoupage #gymcreeps ♬ Real As It Gets – Lil Baby

I know what you’re thinking: “Wait, didn’t we just hear a story about this?” Why yes, you’re right. Our very own Tod Perry covered another woman who had to deal with a guy at the gym who couldn’t take a hint.

Yes, almost back-to-back stories of women who have had enough from fellow male gym-goers. And still, there is victim blaming. In the video’s comment section, one user wrote, “Wear pants like that and expected something different??” How many videos have to go viral before we stop blaming a woman’s choice of clothing (which were really quite normal gym attire, by the way) for a man’s obviously intrusive behavior?

Others also seemed to assess that because Heidi was a fitness influencer, she more or less signed up for this kind of attention, invited or not. Which completely negates this woman having any choice in the matter. However, Heidi did post a tongue-in-cheek follow-up video thanking those who posted negative comments, as it gave her more followers and likes. So I guess there’s some small victory.

Though we may never have a consensus on proper gym etiquette, a good rule of thumb is keep to yourself. Getting the gumption to go workout is hard enough; don’t make staying there a hardship as well.