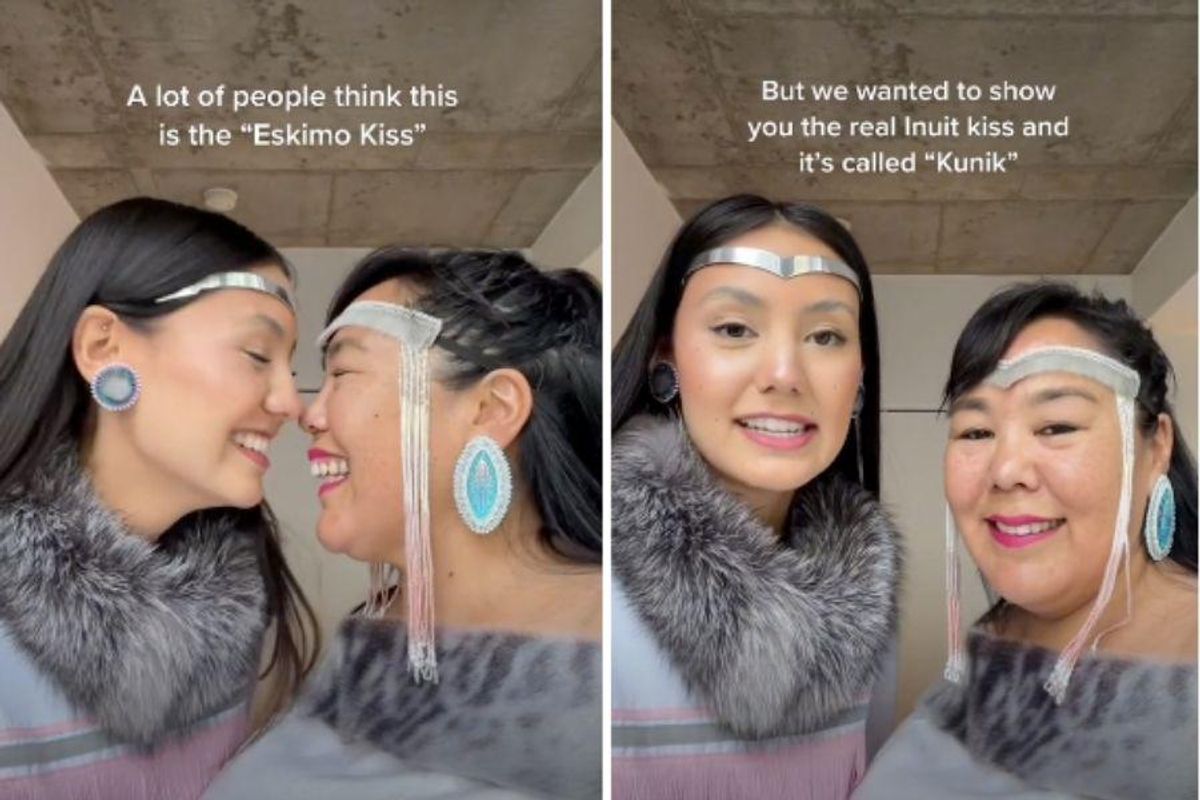 Most Americans have heard the term “Eskimo kiss” and probably have a mental picture of what one is. What many of us may not know is that 1) Eskimo is an outdated term that is generally rejected by the indigenous people of the north to whom it refers, and 2) what we imagine about that “kiss” is not actually accurate.

An Inuit daughter and mother duo shared what a kunik—the correct term for it—really looks like in a video on TikTok. Shina Novalinga shares a lot about Inuit culture on her TikTok channel, and her mother Kayuula Novalinga often joins her to demonstrate this expression of affection.

First, they showed what people usually think of when they think of an “Eskimo kiss”—two people rubbing their noses together. Then they shared what they actually do, which is press their nose against someone’s cheek.

Showing you how we kiss, to show affection @kayuulanova #inuit #indigenous #kunik #eskimokiss

“Usually it’s done with a lot of emotion,” Shina says. “The more love you have for a person, the stronger you do it.”

The demonstration is adorable, with their giggles and obvious affection for one another. And people in the comments greatly appreciated the cultural lesson. How many of us ever even questioned what we’d been taught or even wondered where our impressions came from?

Many commenters from Southeast Asia—Vietnam, Indonesia, the Philippines, Thailand and more—shared that their family members also express close affection in this way.

Shina and Kayuula are Inuit throat singers as well, which is a unique and fascinating art form. Take a listen:

Traditional Inuit throat singing involves two people, usually women, standing face to face. Each makes sounds using their throat, belly and diaphragm, matching each other’s rhythm until one of them stops or giggles. Evie Mark, a throat singer and professor at Nunavik Sivunitsavut, told the BBC, “It’s a very intimate thing so for sure you’re going to be triggered to smile or laugh, especially when you start seeing the person’s eyes when you’re singing together.”

Shina’s mother has her own TikTok channel as well, where she shares more about being an Inuit woman. (Sometimes you’ll see the word Inuk instead of Inuit—Inuk is singular, Inuit is plural and also used as an adjective.)

We can all benefit from learning about cultures outside of our own, and social media makes it easier than ever to expose ourselves to people from all different backgrounds. Thankfully, some people use their channels for the specific purpose of sharing—free education everyone can benefit from.

Thank you, Novalingas, for sharing your gifts and culture with us all.