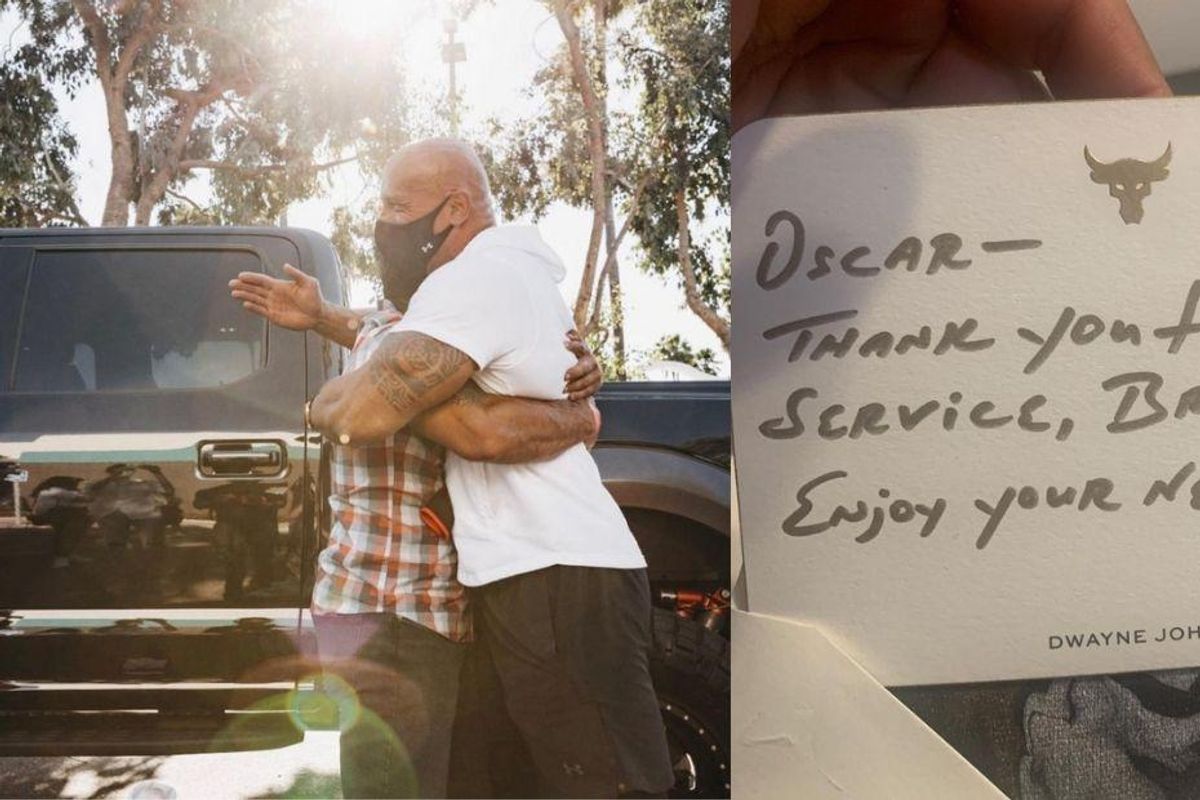 As the old saying goes, “do good and it will come back to you in unexpected ways.”

Oscar Rodriguez is a Navy veteran, church leader and personal trainer in Culver City, California. More important than that, he is a good person with a giving heart. In addition to taking care of his 75-year-old mom, he also makes meals for women victims of domestic violence.

Rodriguez thought he won the ultimate prize: going to a special VIP screening of Dwayne Johnson’s new film “Red Notice,” and getting pulled up on stage by The Rock himself. But it only got better from there.

Thanking him for his service, praising him for giving back to his community and bonding with him as a fellow “mamma’s boy,” Johnson stands with Rodriguez on the stage exchanging hugs … until Johnson says “I wanna show you something real quick.”

A video on The Rock’s Instagram shows the two walking out to a giant black Ford Raptor pick-up truck, where Johnson grabs a note and hands it to Rodriguez, saying, “I wrote this card for you. It’s a little thing.”

Playing along, a bewildered Rodriguez reads: “Thank you for your service brother. Enjoy your new tru-”

Rodriguez collapsed with tears before finishing his sentence. And rightly so. It’s not every day you’re gifted Dwayne “The Rock” Johnson’s very own custom truck.

The caption on Johnson’s post explains that he originally planned to give Rodriguez the same Porsche Taycan driven in the movie. Porsche said no, but the Rock still said yes, and aimed to “do one better.”

Honestly, I don’t know which is more heartwarming: the fact that this fan gets the ultimate surprise from one of his heroes, or seeing two grown men with such a huge display of emotion.

Bursting up from the ground, Rodriguez goes in for yet another hug with the Hollywood icon. His voice high and cracking from passion, he exclaims, “Yo, I can’t tell you how many times I’ve seen you in this truck,” while sobbing and holding his chest. Rodriguez then Facetimes his girlfriend, and shrieks of “oh my god” can be heard from the phone.

As Rodriguez peels out of the parking lot in style, Johnson tells viewers “his laundry list of caring credentials, it’s pretty amazing. So it’s just an honor for me to bring a little bit of joy to a dude who deserves probably a lot more than just my truck.” Not missing a beat, he adds “and now I can figure out…how to get home.”

The Rock might be without a car, but Oscar Rodriguez now has a daily reminder that kindness matters, and that acts of generosity do get noticed. Something tells me that he does these things from something other than extrinsic motivation. Still, a new car always helps.

On Thanksgiving, Rodriguez posted that he plans to emulate Johnson’s positivity, using the “new whip” to pay it forward by encouraging people and lifting their spirits, bringing cheer.

As Rodriguez’s story reminds us, “it’s just love.” Wonderful, surprising moments happen when we remember to act from our hearts.