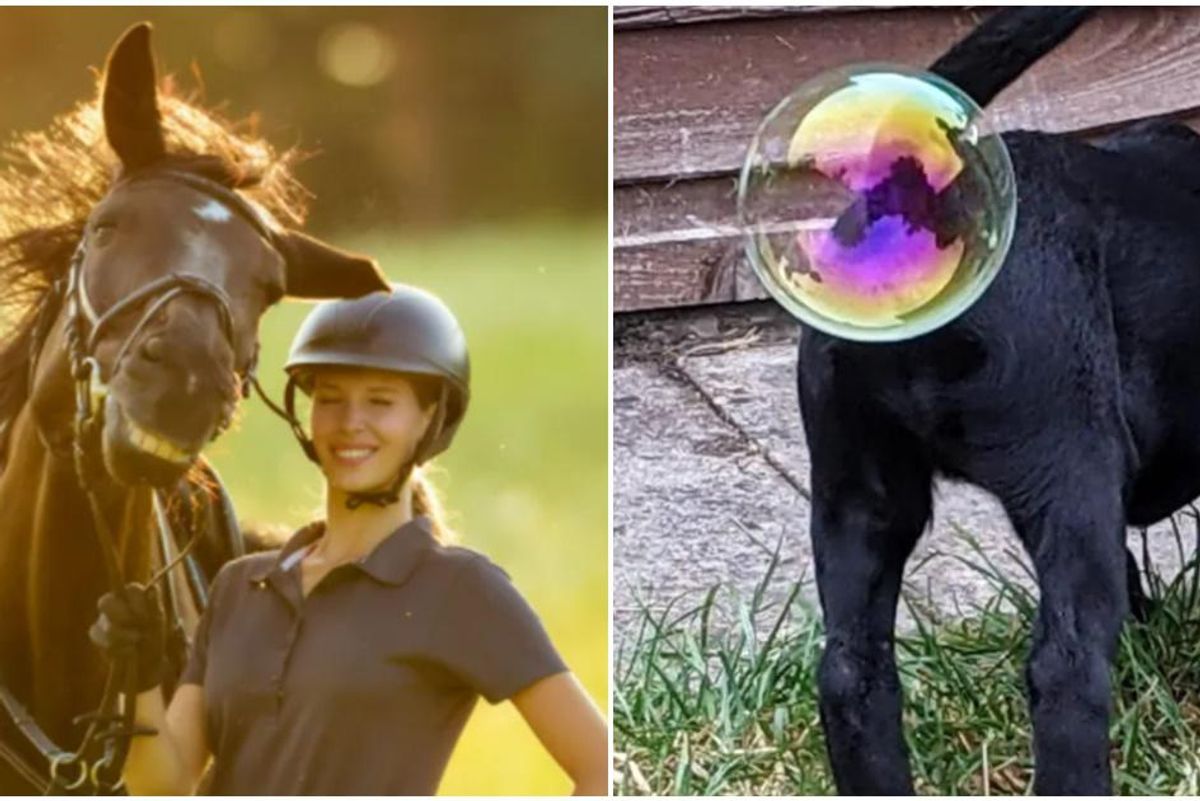 A few weeks ago, Upworthy shared the hilarious winners of the 2021 Comedy Wildlife Photography Awards and the winner was a well-timed shot of a monkey who appears to have hurt the family jewels on a suspension wire. (Don’t worry folks, no monkeys were harmed for the awards.)

The awards were created six years ago by Tom Sullam and Paul Joynson-Hicks to promote positive awareness of animal welfare issues. The competition has been so successful, the duo decided to branch out and create the Comedy Pet Photo Awards, where photographers can submit pictures of their furry friends for a £2,000 ($2650) prize.

Donations generated by the competition go to Animal Support Angels, an animal welfare charity in the UK.

This year’s winner is Zoe Ross for “Whizz Pop,” a photo of her labrador puppy Pepper who appears to be tooting bubbles.

“We never ever thought that we would win but entered the competition because we loved the idea of helping a charity just by sending in a funny photo of Pepper,” Ross said in a statement. “She is such a little monkey, and very proud of herself, bringing in items from the garden and parading past you until you notice her. She is the happiest puppy we’ve ever known and completely loved to pieces.”

Here are the rest of the winners of the 2021 Comedy Pet Photo Awards. 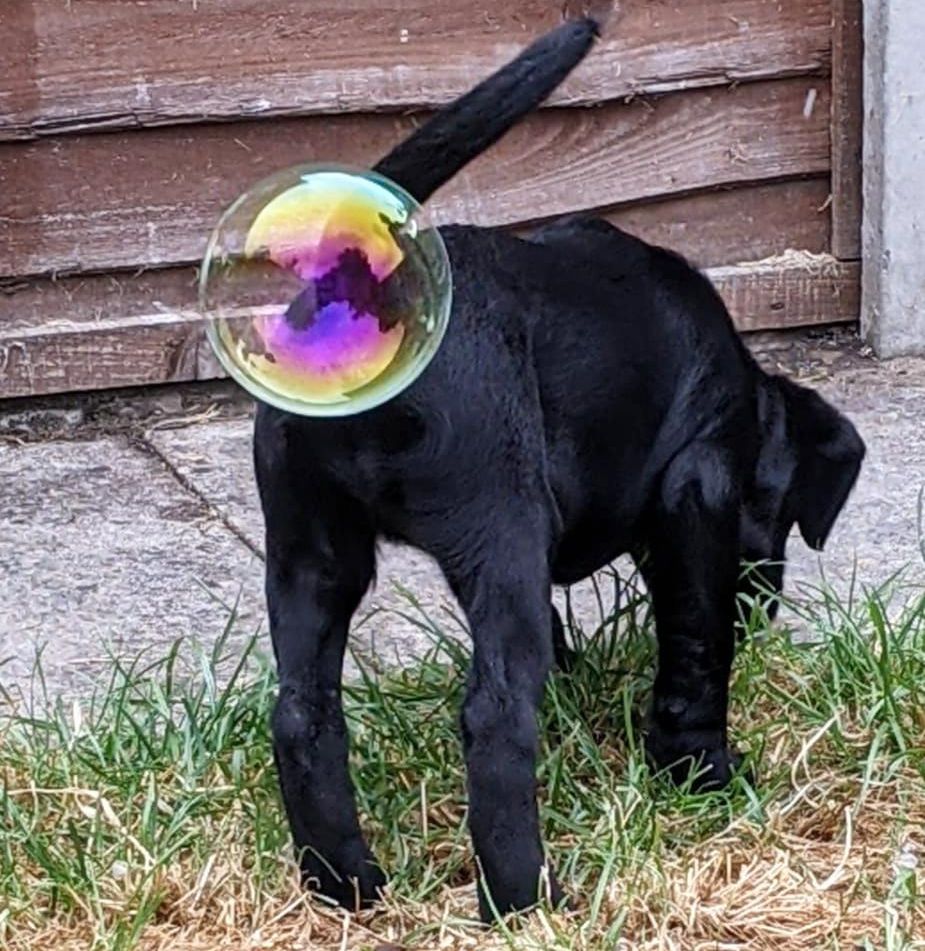 Did this puppy swallow a bubble?

“My golden retriever, Clementine, loves to stick her face in front of the hose while I water the plants. Her expression in this photo made me think of a tyrannosaurus rex, hence the title, “Jurassic Bark.” Duh nuh nuuuh nuhnuh, duh nuh nuuuh nuh nuh, dun duh duuuh nuh nuh nuh nUUUUUUhhhh,” Carmen Cromer. 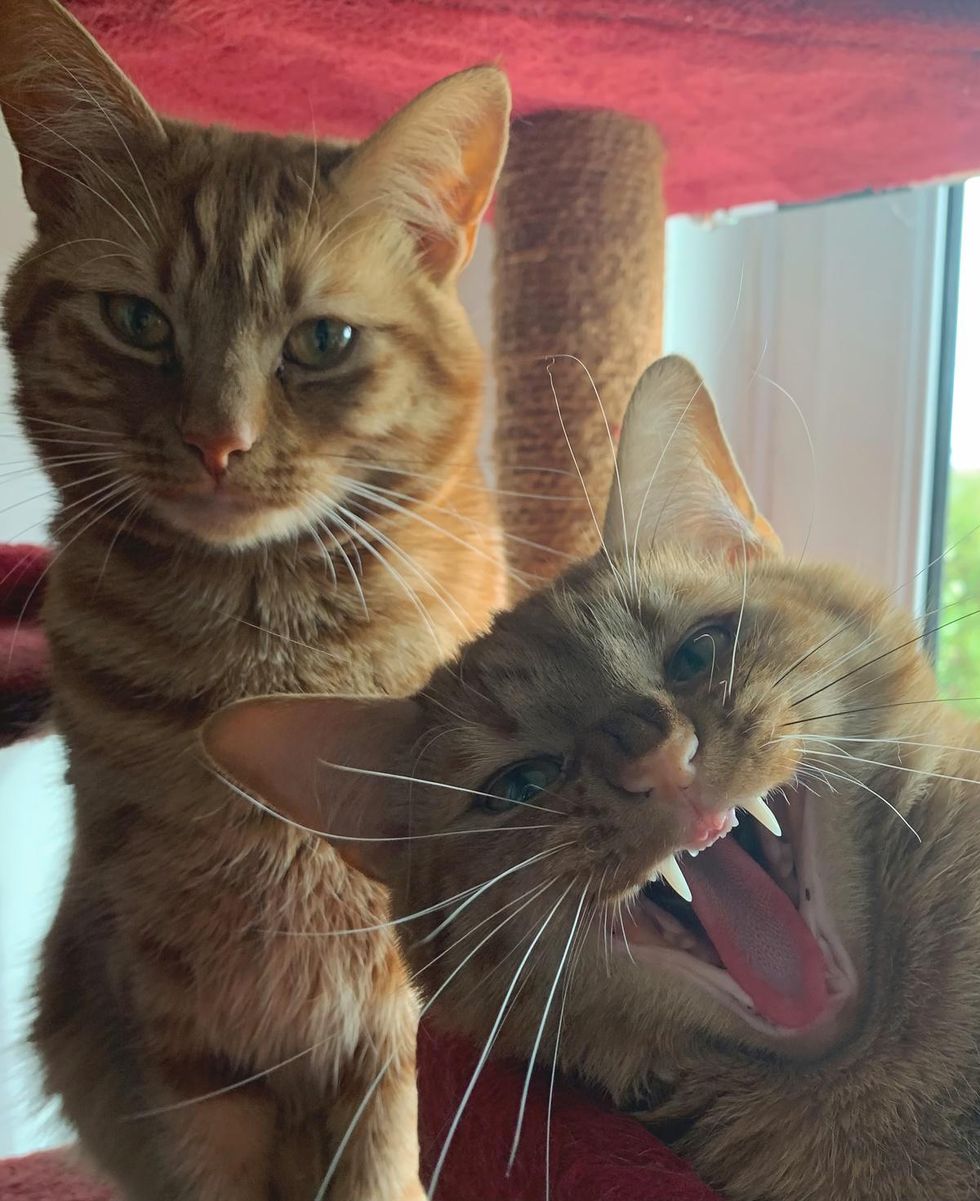 Jeff stealing the limelight from his brother Jaffa. 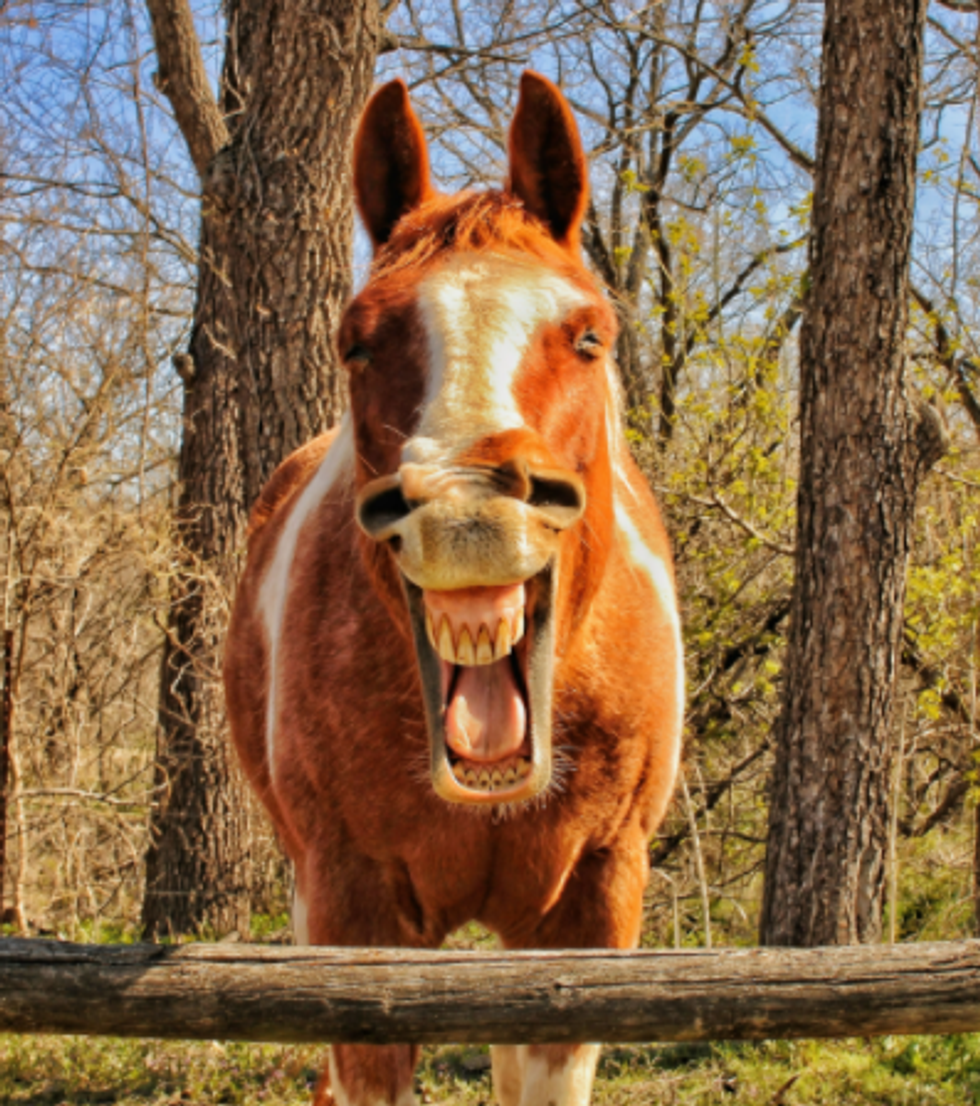 “I like to visit the stable horses before I begin my hike at the State Park. This is the reply I received when I said ‘Good morning,'” Mary Ellis. 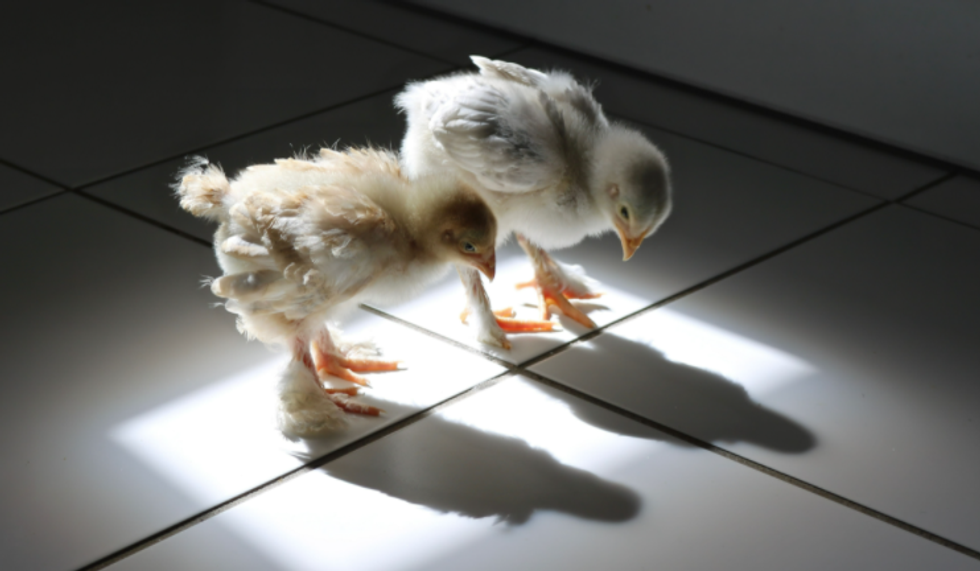 “Cutie and Speedy are two chicks hatched from eggs placed in an incubator at home in August 2020. They spent their first few weeks indoors. In the photo, they are just over two weeks old. They were curious about everything. This is the day they discovered their own shadow. It was hilarious to see them wondering and exploring that ‘dark thing’ that was moving with them!” Sophie Bonnefoi. 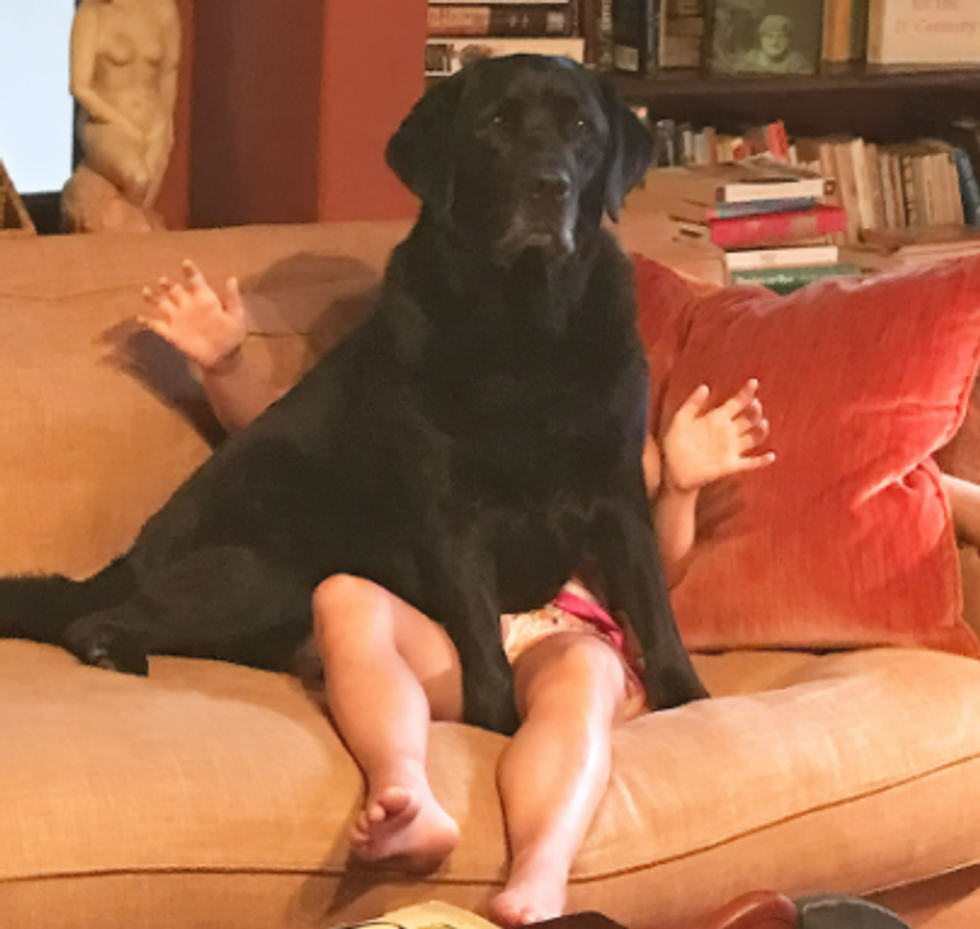 “Our granddaughter gave the command to sit. Beau is very obedient,” Suzi Lonergan.

Pets Who Look Like Their Owners Category: Jakub Gojda, “That Was a Good One!” Czech Republic 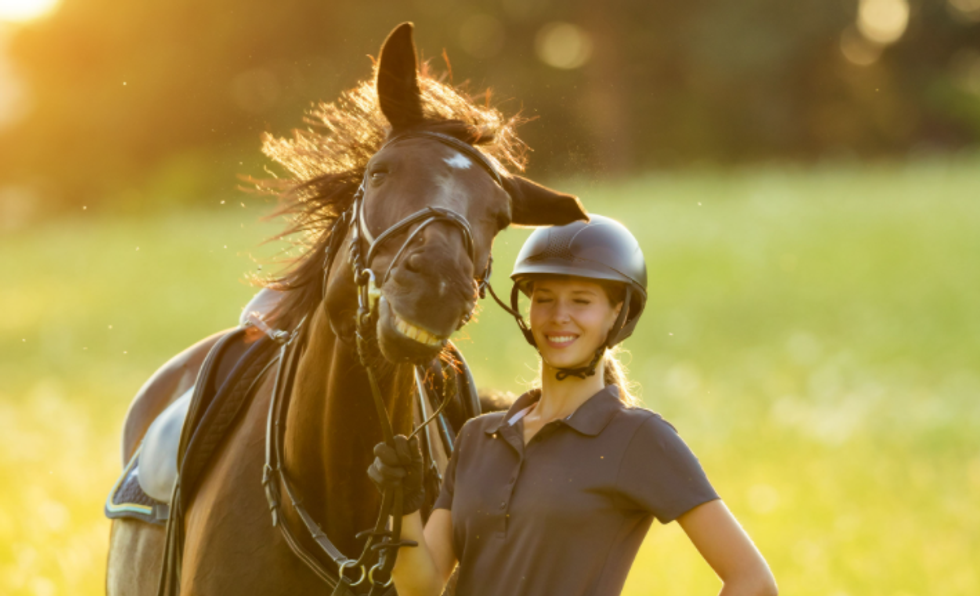 “This photo was taken by accident during the photography of my ex-girlfriend with her beloved mare. For this cheerful moment, I thank the fly that sat on the horse’s nose and he instinctively shook his head,” Jakub Gojda. 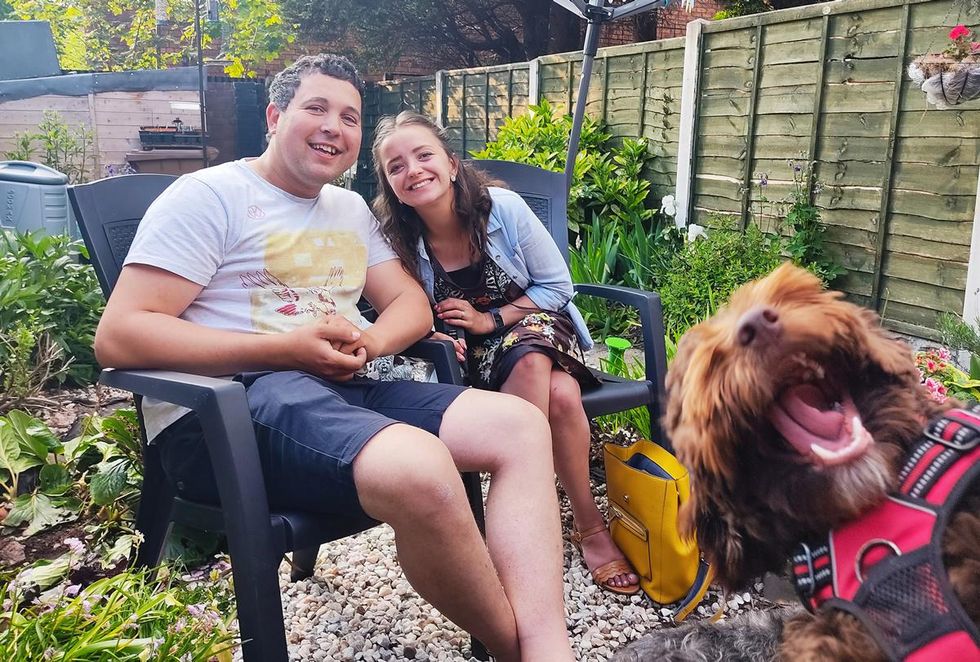 “This is my best friend Faith, her husband Alex, and their cheeky Sproodle, Hugo. Faith wanted a photograph to mark a special occasion—her first outing after shielding at home for 14 months. Hugo jumped into the frame at just the right moment!” Chloe Beck. 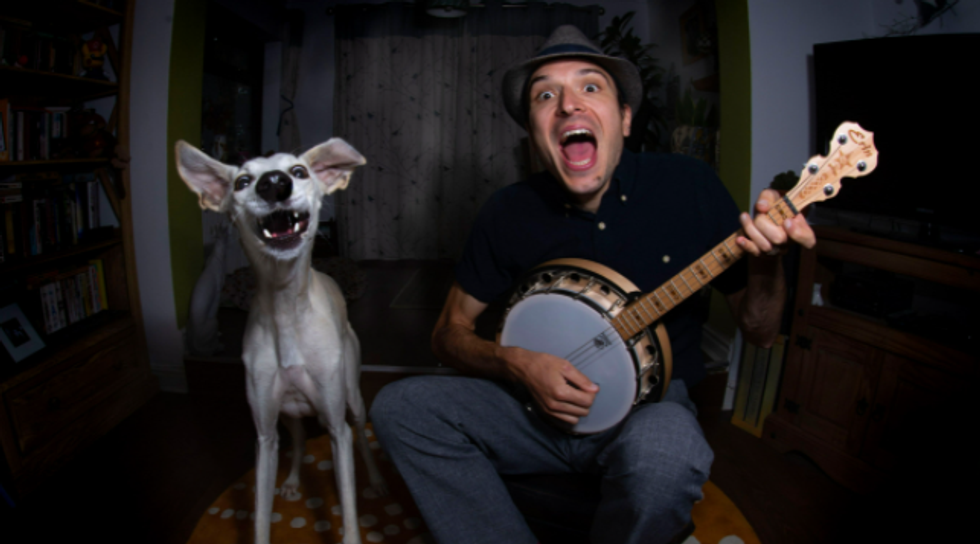 ​”Losing the opportunity to play with my human bandmates during lockdown, Flint, my rescue dog, soon taught me that we didn’t just have sharp bones in common, but musical ones, too. He soon became the perfect substitute for a collaborative stomp up at home, so much so that we felt we deserved our own band name (Muttford and Chum). With my camera set up remotely during this shoot, I think it’s fair to say that the image is proof that his conviction as a performer matches my own,” Luke O’Brien. 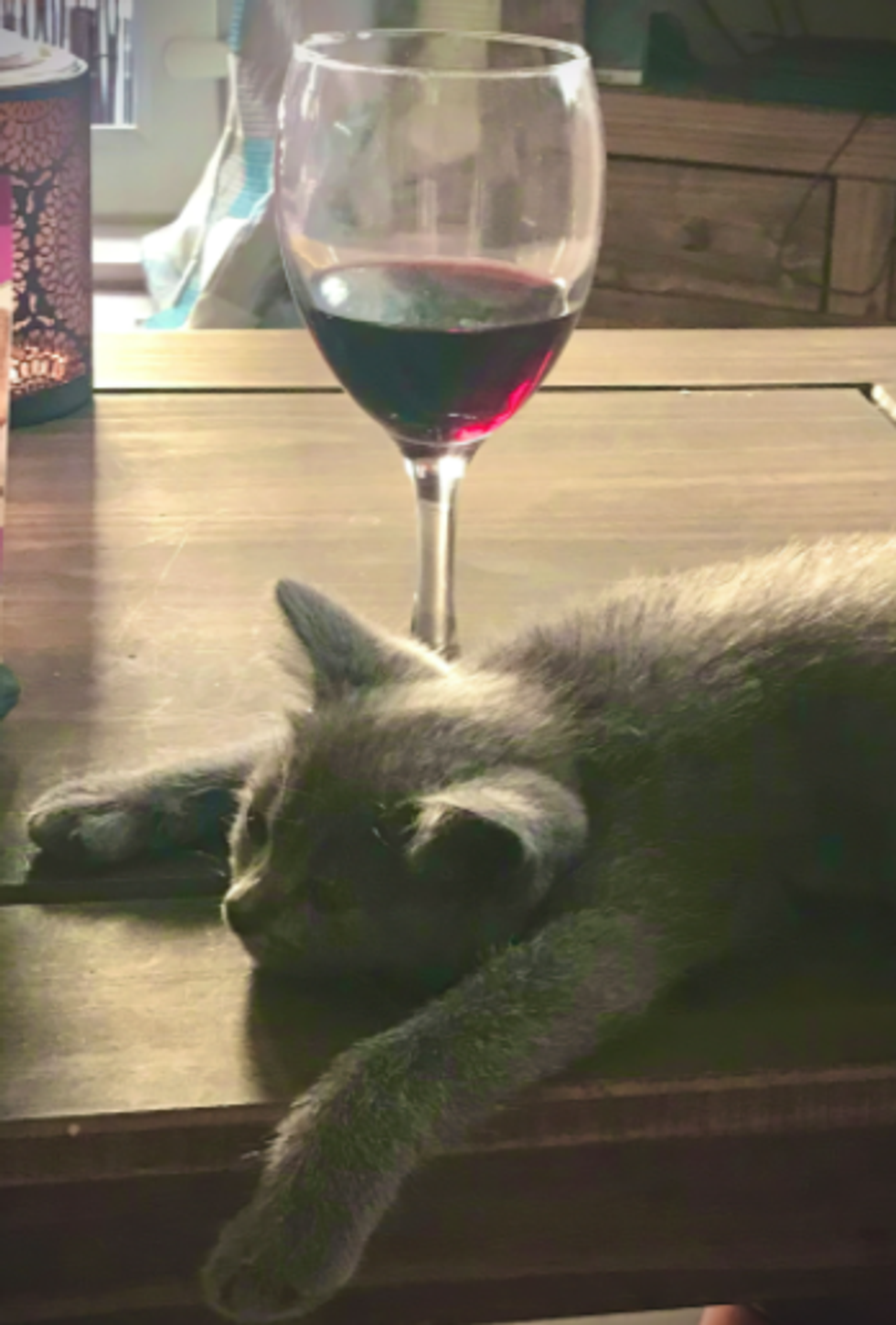 “It’s that time of day again! Little Blue enjoys it almost as much as me,” Kathryn Clark. 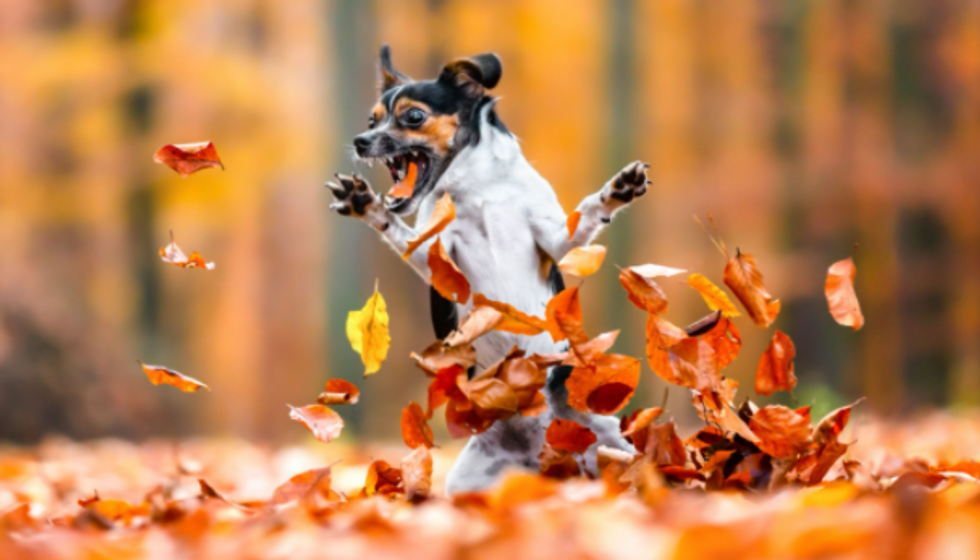 This is Leia. As you can see, she definitely loves playing with all the leaves in autumn. It was really tricky to take this picture because you never know what the dog is going to do next,” Diana Jill Mehner. 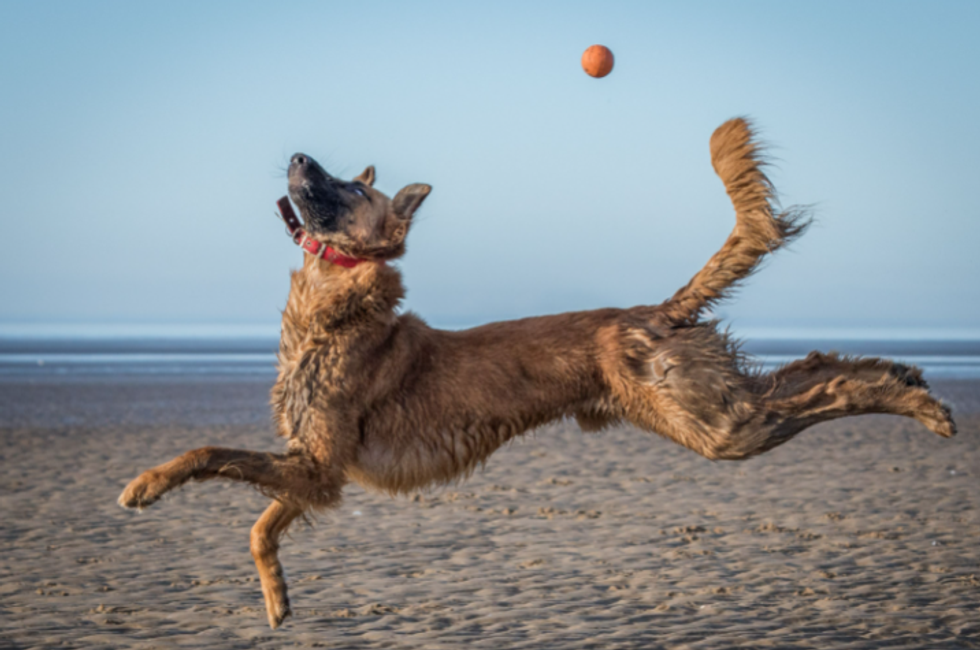 “I was busy playing with my dog on the beach and this dog came to play. I liked the shapes he was making in the air,” Christine Johnson 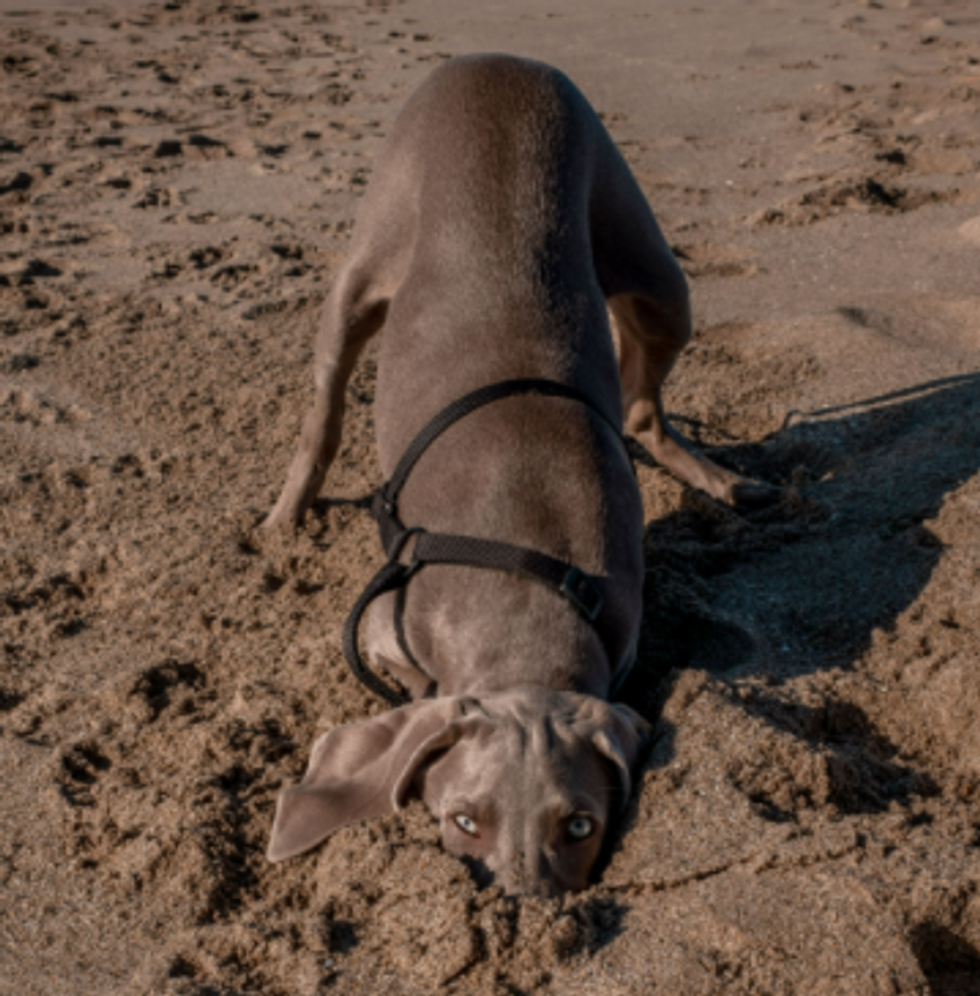 Nuka playing hide and seek at the beach. 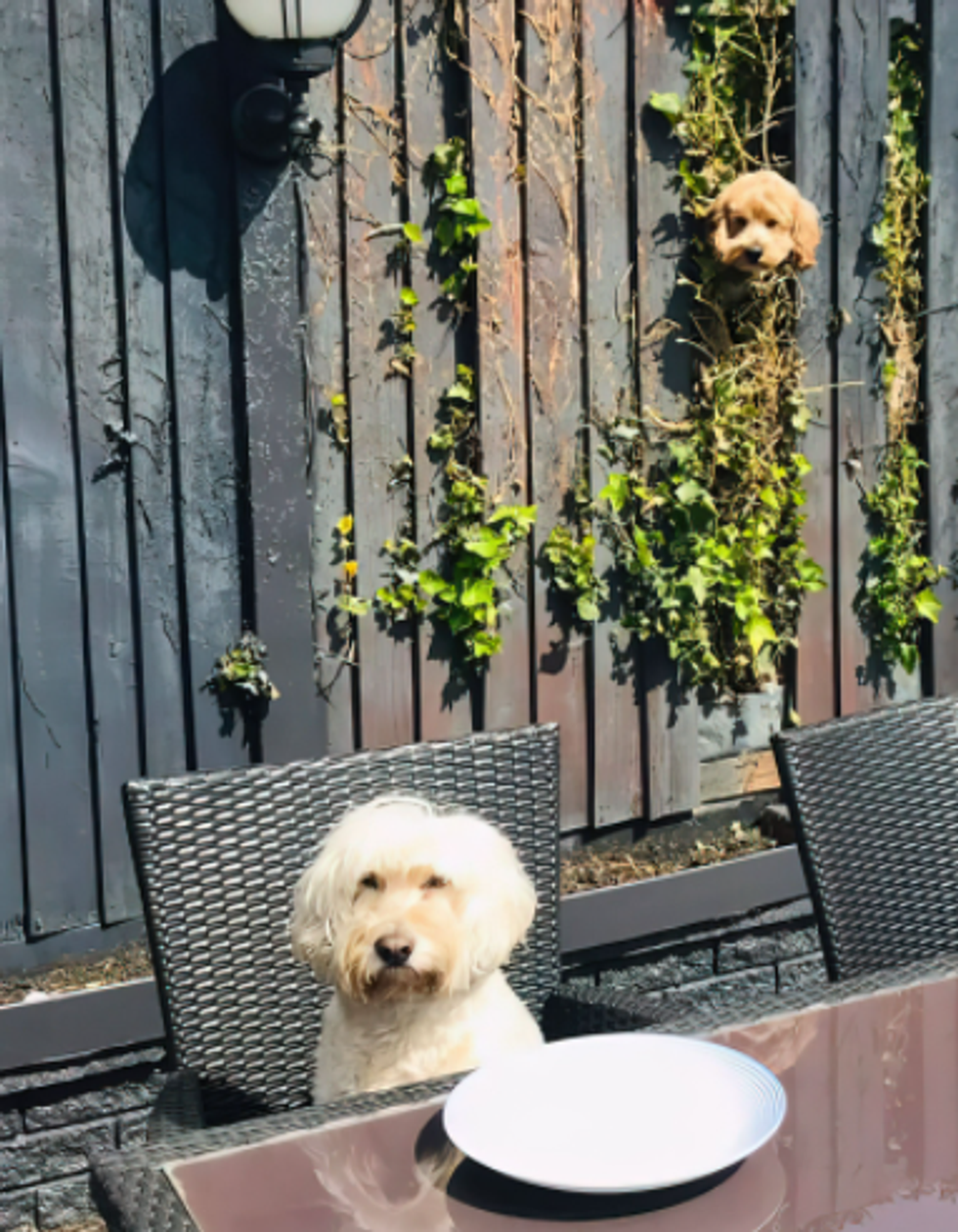 ​”According to Ozzy, we need a new fence panel ASAP. He is fed up with Chester our nosy next door neighbor spying on him every time he has a meal,” Colin Doyle. 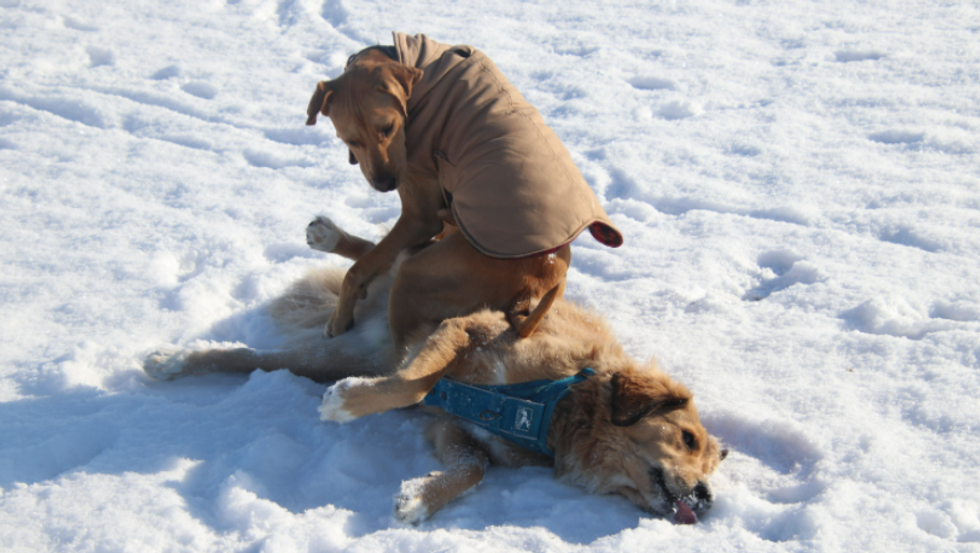 “Two of the morning regulars at the dog park are Gary (hound mix with the jacket) and Kona, one of the most chill dogs ever,” Corey Seeman. 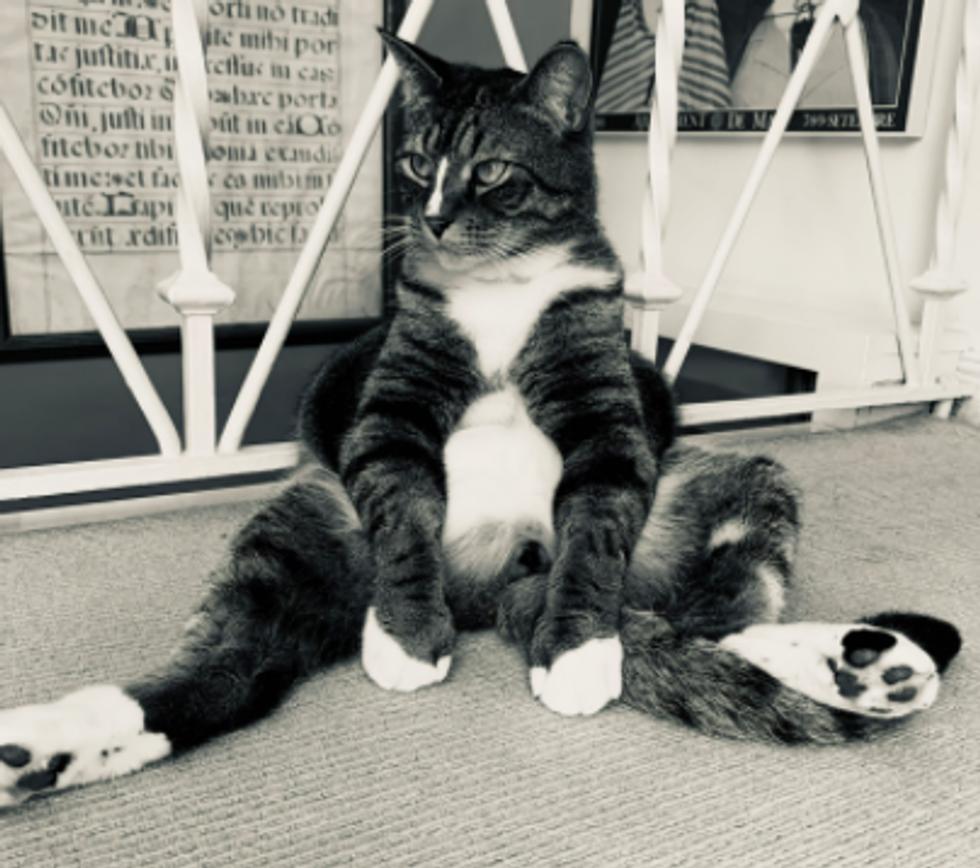 “This is how I like to sit!” Vincent the cat. 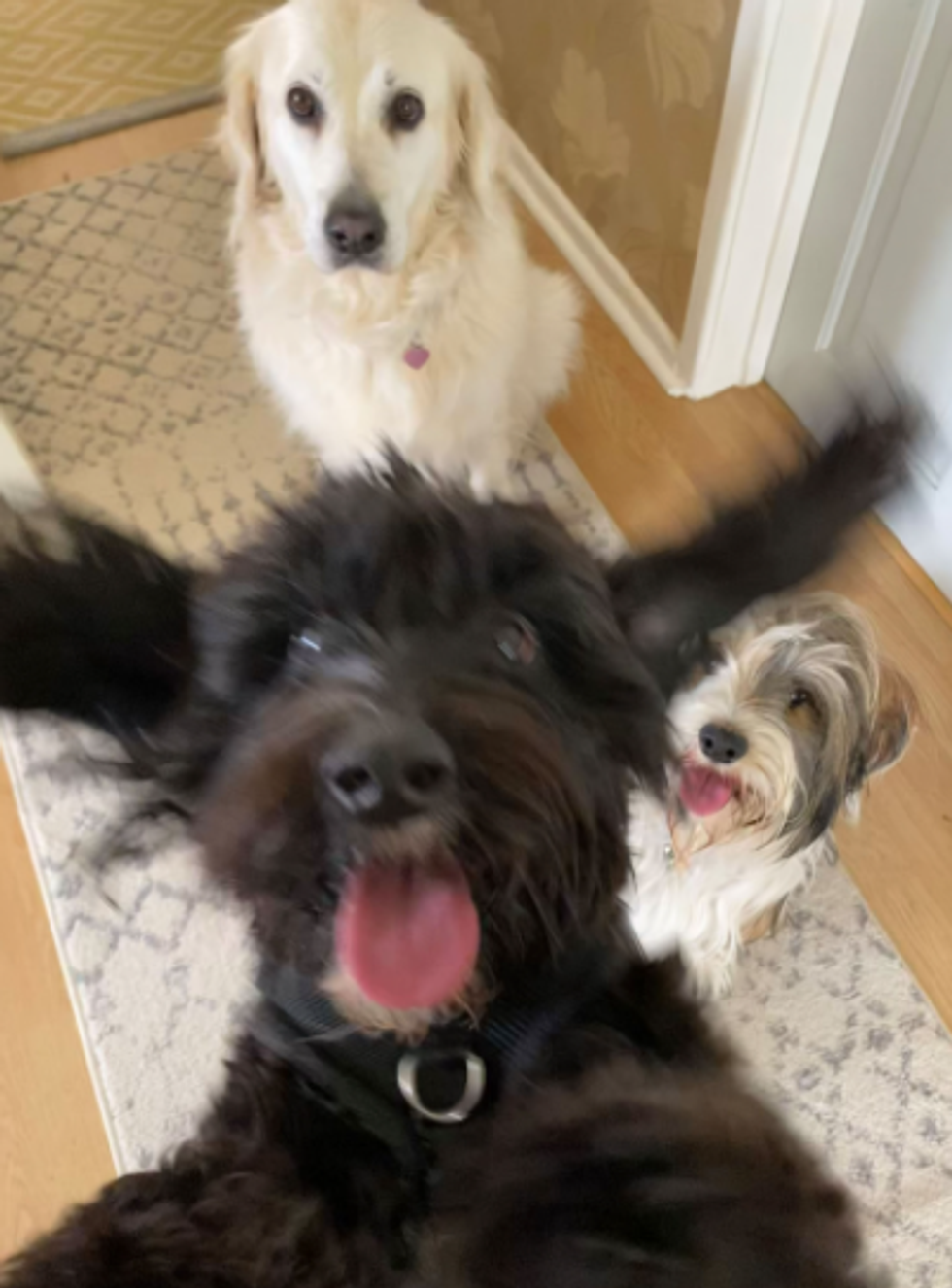 “Bailey was so excited to see her friends, she couldn’t sit still for a photo!” Mollie Cheary.