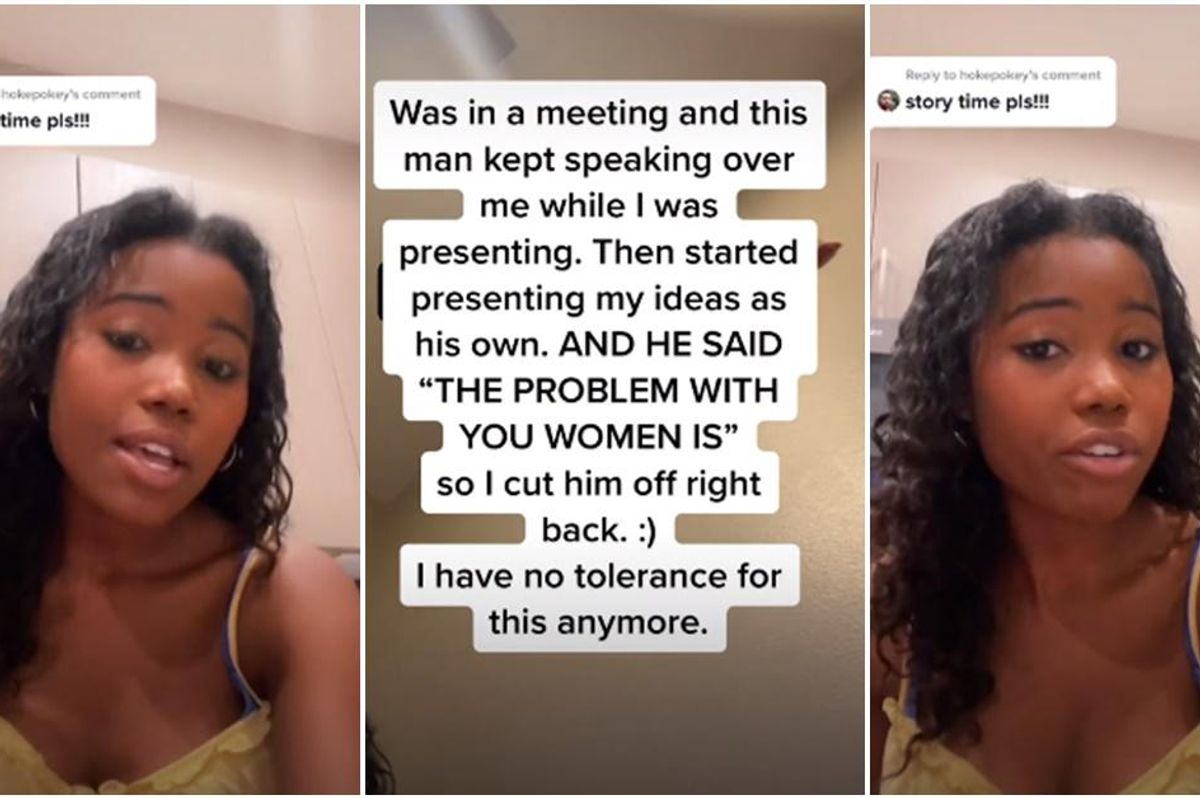 Twenty-year-old Sabrina Lassegue started a production company two years ago and is already well versed in the obstacles she faces as a young woman in media. She spends a lot of her time working with mentors who teach her how to handle older people in the industry, especially men, who refuse to listen to her.

“I knew as a young woman I wasn’t going to be taken seriously,” she said on TikTok. “So I practice all the time and I’m lucky to have wonderful mentors in the industry who have helped me find ways to respectfully get my point across and turn the table back around, to me, in a meeting.”

Lassegue was recently hired by a brand to make a commercial for a feminine product. While presenting her idea to the company the brand uses for marketing, a man was very disrespectful to her.

“He claimed I didn’t understand the audience and attempted to tell me what women wanted to hear,” she told BuzzFeed. “He had his own agenda and wanted a chance to pitch himself to create a commercial for the brand. He began to shut down every idea I had without hearing them out or would take everything I had said previously and repeat it back as he stumbled his way through my original phrases.”

Lassegue repeatedly asked the man to stop interrupting her so another female teammate joined in and asked him to respect her wishes. After that, the man said, “The problem with you women is…” and Lassegue had enough.

To document the disrespect, she pulled out her phone and recorded herself telling the man off.

“No. No…please keep yourself on mute. No, I’m actually not done speaking, so while I respect your ability to talk on and on, my ears actually do have a limit,” Lassegue said. “I find it extremely disrespectful and degrading that you felt a need to not only interrupt my entire presentation but also repeat back to me what I had just offered to the table.”

She posted the video on TikTok to show the world what young women have to deal with in media and the video has been played more than 12 million times. It has also received an incredible amount of positive feedback from women who’ve had to deal with the same thing.

“Ah yes, I’ve been in video production for over 20 years now. This happens daily! I have my own company now and work only with women,” Melissa said.

“Men do this so much. They stop you in the middle of a sentence, and then proceed to explain what you were just explaining,” another TikTok user said.

“This is the most concise professional DESTRUCTION and I am in awe,” Meredith wrote.

After the video went viral, the company and the man who was rude to her both apologized to Lassegue. The company is setting up another meeting so that Lassegue can present her ideas without disruption.

The disruptive man has been taken off the project.

This video is wonderful for two reasons. First, it presents a great example of how women can clearly and professionally tell a man to stop being disrespectful in meetings. Second, it’s an example for companies to learn how not to treat women in meetings.