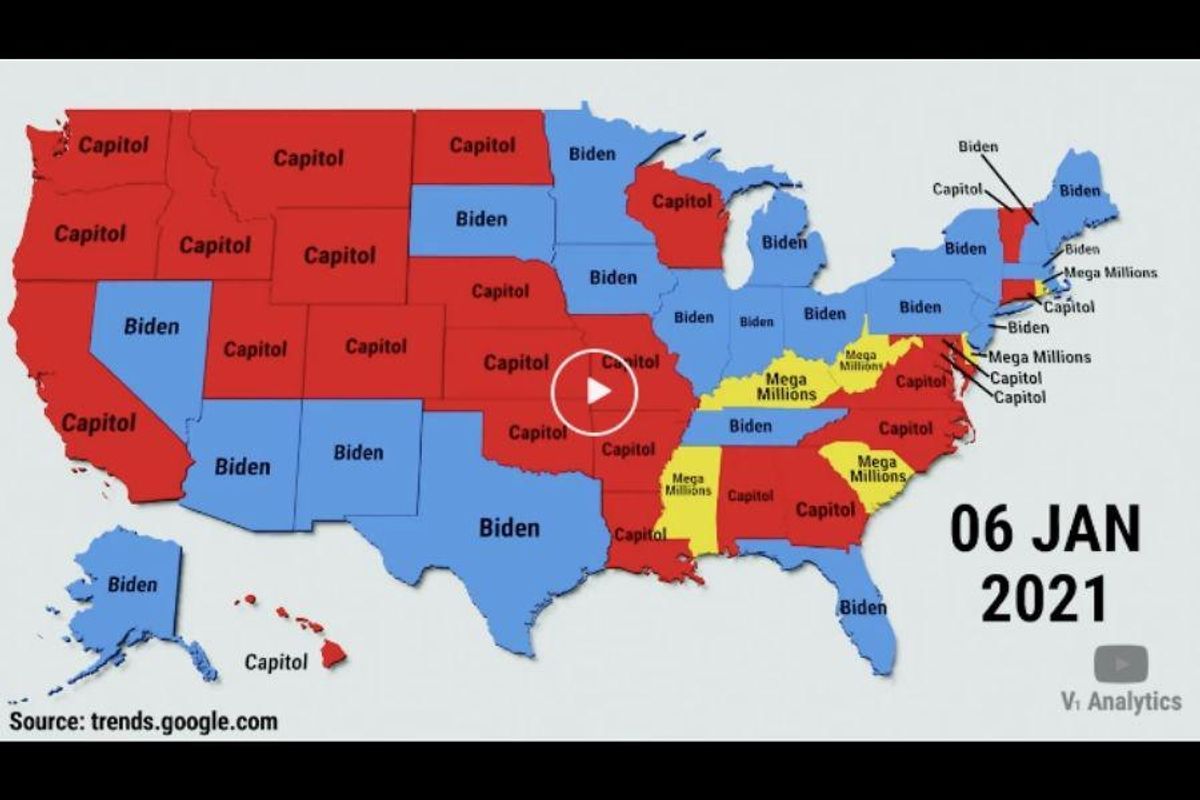 Google has become such a ubiquitous part of our lives that the data it reveals is a pretty decent indicator of our collective reality. It’s a weird phenomenon, considering the fact that Google has only been a thing for 25 years—basically a single generation—but here we are.

Now that we’re wrapping up 2021, we can look back and see what people were searching for the most throughout the year. Reddit user u/V1Analytics pulled together the top trending search terms from Google’s 2021 Year in Search summary (for the period before mid-November 2021) and from Google’s Daily Search Trends page (from mid-November to now) and illustrated the daily trends for each state in a one-minute video.

It’s fascinating to see what Americans were looking up—as well as what they weren’t looking up—the most this year.

We start with January 6, 2021, which shows most people Googling “Capitol” and “Biden,” which isn’t surprising considering the attack on the U.S. Capitol as insurrectionists tried to overturn Biden’s presidential election win. What is surprising are the six states that were more interested in the Mega Millions jackpot that day. Like, OK people. Really?

Biden dominated searches through January. Soon we collectively turned to the Gamestop (GME) stock phenomenon before a widespread interest in Valheim (video game launch), The Weeknd (Super Bowl performance) and some random power outages. Valheim was apparently super popular before a universal interest in the government’s stimulus checks took over the entire second half of March.

In April, Lil Nas X made a splash, followed by rapper DMX. Then Prince Phillip died and Jake Paul had a first-round TKO.

In September, Gabby Petito’s disappearance had everyone riveted for a solid two weeks before Squid Game, Urban Meyer and Alec Baldwin took over.

Don’t blink at the end of November, or you’ll miss the school shooting at Oxford High School that piqued people’s interest for a day or two before Spotify Wrapped yanked everyone’s attention back to what’s really important.

Yikes! Tornado in December and then Elon Musk as Time Person of the Year, and that’s as far as we’ve gotten into this month.

It truly is fascinating to see what people were most interested in looking up this year. It’s a bit disconcerting in some ways, as well, considering the fact that not one of the top searches had anything to do with the viral pandemic that is still raging and has killed hundreds of thousands of Americans this year alone. Is that a sign that people are tired of the pandemic or just more interested in new things as they come along? Trends can be both organic and driven by what’s being covered in the media—and both things can play off of each other—but it’s interesting to think about what is missing from this search term synopsis. When we look back at 2021 and its place in U.S. history, is Jake Paul really going to play a bigger role than the coronavirus? Doubtful. Do these search trends offer some indication of why a significant portion of the population is woefully uninformed or misinformed about the pandemic? Possibly.

At any rate, it’s an interesting glimpse into what Americans are paying the most attention to.