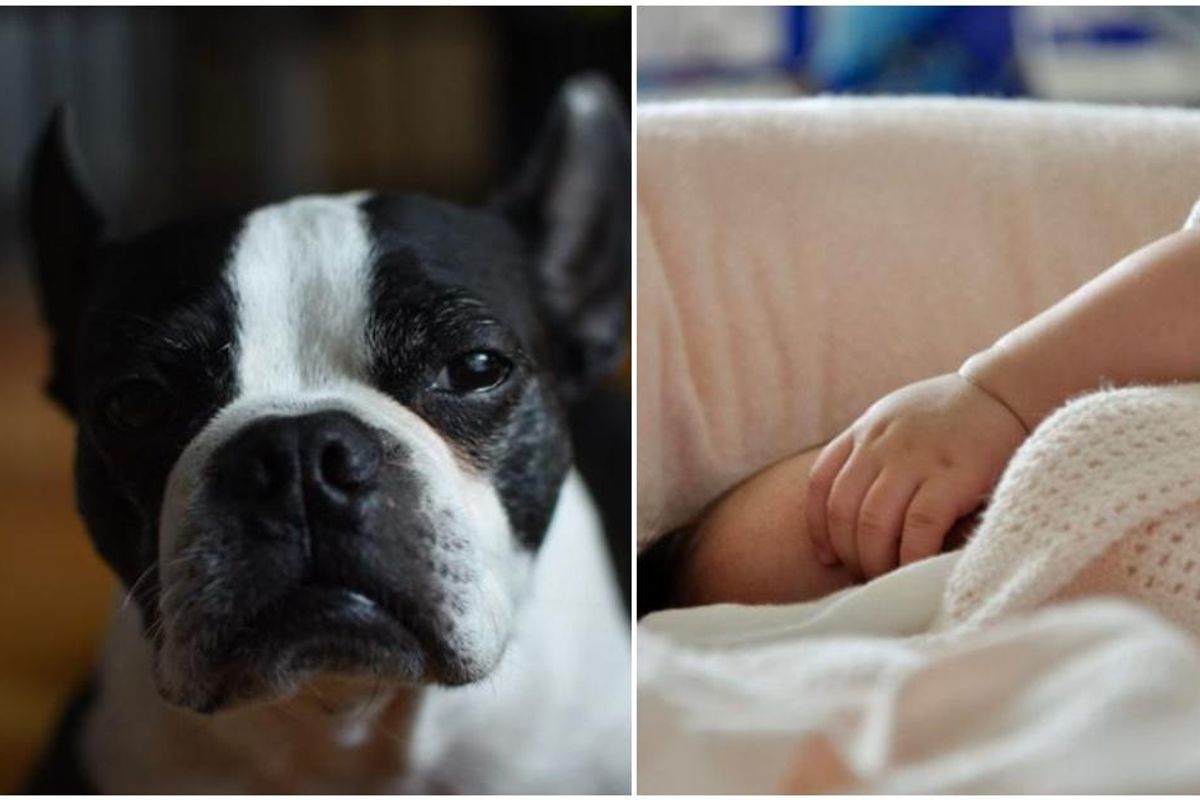 When Kelly Dowling of Glastonbury, Connecticut put her 9-month-old daughter to bed on Monday night the baby was dealing with a cold and wasn’t feeling well. Kelly became angry after her 8-year-old Boston terrier, Henry, kept banging his head on the nursery’s door and running in and out of the room to sniff at her.

“He was not acting like himself, he kept going back in,” Kelly said. “It seemed very belligerent and unusual for him,” she told NBC Connecticut. Kelly said she was “getting so fed up with him,” because he was waking her sick, sleeping, child.

After scolding the dog, he didn’t run and hide beneath the bed like he normally does. He kept running back into the nursery.

“And every time I shooed him away, he would go back in every time my back was turned,” she told Good Morning America.

Hero dog to the rescue! This Boston Terrier helped save a baby’s life. https://gma.abc/3F1LwrTu00a0pic.twitter.com/p1aF7HImZU

The dog’s constant running in and out of the room alerted Kelly to the fact that her daughter had stopped breathing. “She wasn’t clearing her airway. She started to go blue and turn rigid, and she just really couldn’t get air [and] couldn’t get any oxygen,” she said.

Dowling and her husband Jeff rushed their daughter to Connecticut Children’s Medical Center where doctors were able to clear the build-up in the baby’s throat so she could breathe.

Last night the dog kept breaking into the nursery and waking the baby. Sheu2019s been sick, and I was getting so fed up with him. nnUntil she stopped breathing. nnWe spent the night in the hospital. I donu2019t know what would have happened if he hadnu2019t woken her. We donu2019t deserve dogs.pic.twitter.com/PBJCJVflgh

After their baby began to feel better, the Dowlings realized that their dog was trying to tell them something when he kept running in and out of the room. Henry had realized that the baby was having trouble breathing and tried to alert them. Who knows what would have happened if he hadn’t woken the baby up?

“I don’t know what would have happened if he hadn’t woken her,” Kelly wrote in a Twitter thread, detailing her ordeal. “We don’t deserve dogs.”

Dogs have an incredible sense of smell. Henry probably smelled the air around the child and noticed that something was different.

The next day, Dowling shared an update on the baby’s health on Twitter saying she “is doing much better today and we are home with Henry, who bravely held the fort all night even though he is scared of the dark.”

Thanks for all the well wishes, everyone. The baby is doing much better today and we are home with Henry, who bravely held the fort all night even though he is scared of the dark. pic.twitter.com/dKem0kXQzs

As for Henry? Well, he’s living the good life after becoming the hero of the family.

“[We’re] definitely spoiling the dog a little bit more,” said Jeff. “He was allowed to sleep in bed with me last night, and he’s got a steak in his future.” He’s also getting double the doggie gifts for Christmas.

“We give him a stocking every year for Christmas and I’m going to have to refill the stocking before Christmas (this year), because he’s gotten all of his toys early,” she said.

The story of Henry’s bravery is a great reminder that dogs have heightened senses and can perceive things that we have no idea are happening. So, if we see a dog acting strangely, it’s best to try and find out what they’re trying to communicate. It could be a matter of life and death.