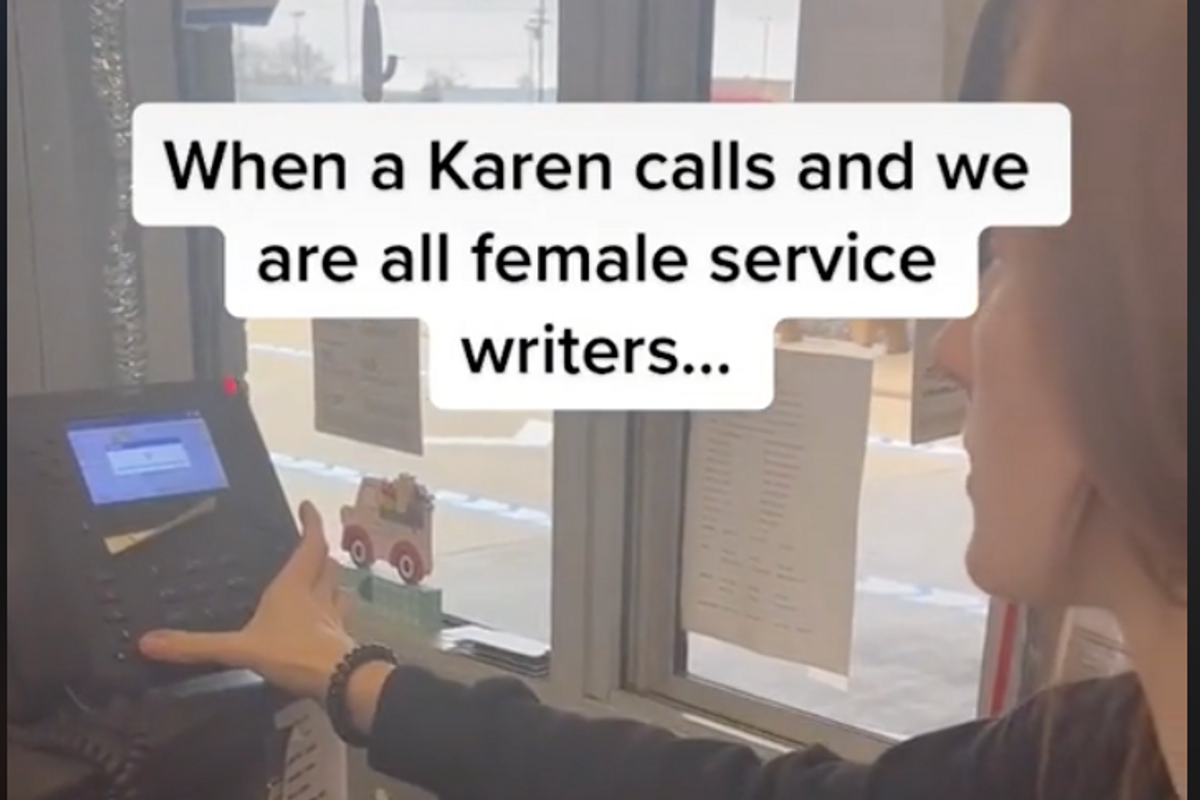 When a video caption reads, “blows my mind how people can be,” you tend to expect the worst. And though it’s practically common knowledge that misogyny is still a very real thing, watching this woman outright refuse to let another woman work on her car is still shocking. Not to mention troubling.

Nearly 2 million people on TikTok have now seen this video, which was uploaded by a woman named Rachel (@25centrayray), who works at a car dealership in the service department.

On the screen we see: “When a Karen calls and we are all female service writers…”

Rachel’s coworker, Autumn, simply answers the phone with a warm, professional greeting, and the woman on the other line is already displeased.

“Autumn, I didn’t ask for a female, I would like to talk to a male.”

Yeah, she said that. And more.

The woman continued, “my opinion is that females don’t belong in the service department. They belong behind the scenes doing the paperwork.”

This is the part that really got me. Like, doesn’t this woman know that 99% of most jobs is paperwork? What does that even mean?

Rachel lets us know that their department is run by a female service director who oversees two dealerships and has more than 25 years of experience. So if this woman is looking for a qualified professional, she’s in luck!

But if she simply needs a male in charge, she’s asking for disappointment.

Autumn breaks the sad news that unfortunately, there are no males in the dealership’s service department. The only solution is to transfer her to the sales department, where there is a male coworker.

Which is actually a nonsolution as, predictably, the woman will get transferred back. And she does.

When the woman eventually gets back on the line, she tells Autumn that she needs to make an appointment, threatening, “I just hope there are no females on the desk when I get there.” Yikes.

Once again Autumn (the real MVP of this whole debacle) keeps her cool and politely reminds the woman that there are still no males who work in the service department.

The woman’s reply? “Oh God, that is totally messed up. I need my oil changed but there better be a male mechanic that I can talk to.”

Rachel lets us know that this woman is something of a regular customer, and has “some issue every visit,” but this goes beyond just being a difficult patron.

The woman then says that she doesn’t “want a female working on [her] car” because last time she came, it took a hour to do a job that should have taken five minutes. That because an “incompetent” female failed to page her at a reasonable time, she had to “track down a male” to get it sorted.

Rachel tells us what actually happened though.

“The time she speaks of is the appointment she refused to reschedule due to our shop getting hit with Covid and being down four techs so the shop was behind, and was told of the extended wait time.”

It’s always a best practice to avoid judgment and take a middle approach, but as a woman watching this, I can’t help but be gutted.

As one person wrote, “I will never understand female hating other females,” and, well, yeah. Hate is what it feels like.

Other people in the comments were quick to respond to this abhorrent behavior, including a woman who wrote, “as a female mechanic I’m livid.”

“This is repulsive,” another person added.

Others had more biting (yet pretty funny) responses:

“Ma’am, did you get your husband’s approval first before you called us? I’d like a handwritten permission and notarized before we can continue…”

“You should have told her that her husband needs to call to schedule the appointment to make sure it’s the right service being requested.”

To the dealership’s credit: The owner, rightfully “shocked and outraged” after seeing this video, had the woman “fired as a customer.”

You would think—especially in this day and age—that our society could wrap their heads around the fact that yes, women are completely capable of doing more than “behind the scenes” jobs.

But rest assured, if this woman holds this opinion, others do too. It’s heartbreaking and infuriating all at the same time.

On the other hand TikTok is an amazing platform for exposing outdated thinking and challenging obsolete societal norms. One of our staff writers, Tod Perry, wrote a few months ago about a female mechanic who was told “she didn’t belong” by a male coworker. As the headline suggests, she proved him wrong.

As more and more women pursue opportunities, do kickass work and succeed, it’s bound to piss a few people off, who somehow view equality as some sort of threat to tradition. But in the end, that’s their problem.