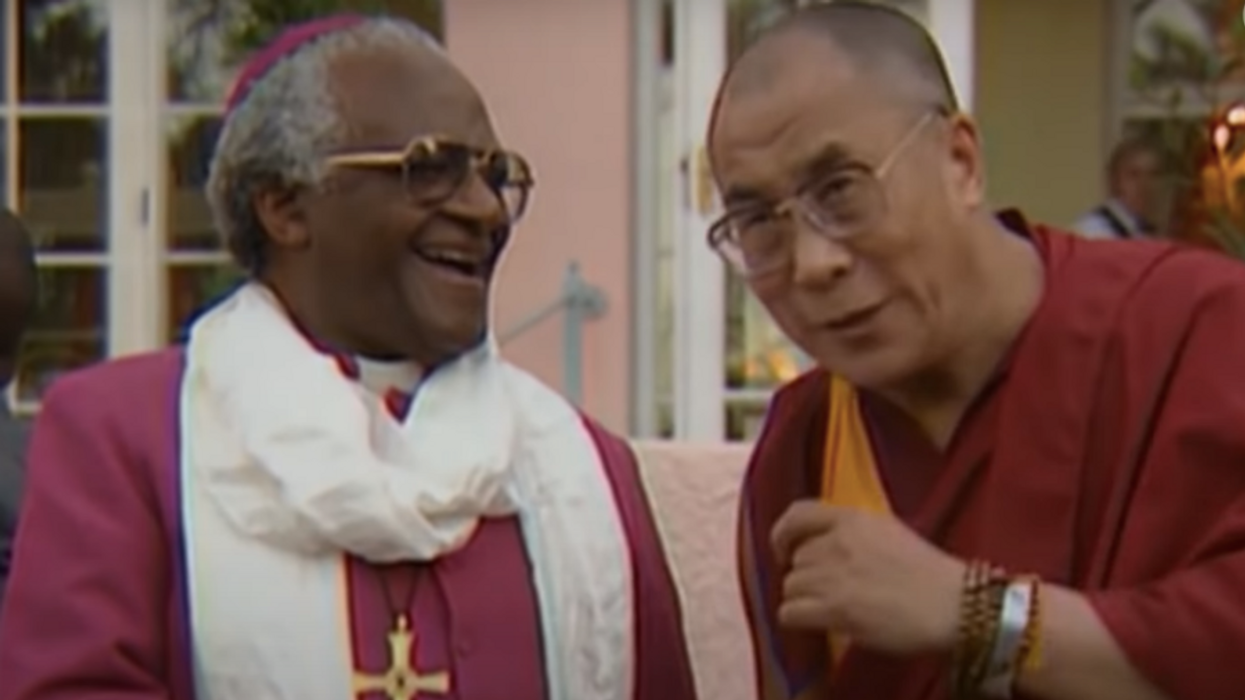 Occasionally a religious leader comes long who garners universal love and respect from people of all faiths. Anglican Archbishop Desmond Tutu was one of those leaders, and the world is mourning his passing at age 90.

Tutu will be remembered for his fierce passion for justice combined with his humble, humorous manner. He courageously took on the injustice of apartheid in his home country of South Africa, advocating for non-violent protest against the white supremacist system. He was appointed the head of the Truth and Reconciliation Commission after apartheid ended, which provided a model for the world of restorative justice. He won the Nobel Peace Prize in 1984 for his work on human rights. He gave speeches and wrote books about hope, faith, forgiveness and joy, including one co-written with the Dalai Lama.

His inclusivity and open-hearted approach to all people was an inspiration to all.

Desmond Tutu in his own words: ‘He loved, he laughed, he cried.’

He was a man who endured severe racist oppression, then wrote: “When we see others as the enemy, we risk becoming what we hate. When we oppress others, we end up oppressing ourselves. All of our humanity is dependent upon recognising the humanity in others.”

He called for justice and true equality for all: “I am not interested in picking up crumbs of compassion thrown from the table of someone who considers himself my master,” he said. “I want the full menu of rights.”

And called us all to action on that front: “If you are neutral in situations of injustice, you have chosen the side of the oppressor. If an elephant has its foot on the tail of a mouse, and you say that you are neutral, the mouse will not appreciate your neutrality.”

He was a deeply religious Christian cleric who embraced people of all faiths, famously writing, “God is not a Christian” and telling Real Leaders:

“It doesn’t matter where we worship or what we call God; there is only one, inter-dependent human family. We are born for goodness, to love – free of prejudice. All of us, without exception. There is greater commonality in our belief systems than we tend to credit, a golden thread expressed in the maxim that one should treat others as one would like others to treat oneself. I don’t believe in the notion of ‘opposing belief systems.’ It would be more accurate to say that human beings have a long history of rationalizing acts of inhumanity on the basis of their own interpretations of the will of God.”

He wasn’t about the noise. In his address at the Nelson Mandela Foundation in 2004, Tutu said: “My father always used to say, ‘Don’t raise your voice. Improve your argument.’ Good sense does not always lie with the loudest shouters, nor can we say that a large, unruly crowd is always the best arbiter of what is right.”

And he was funny. His playful friendship with the Dalai Lama is one for the ages.

This is WONDERFUL.nI did not expect Archbishop Desmond Tutu and the Dalai Lama to be the Carl Reiner and Mel Brooks of organiser religion.pic.twitter.com/h8ub0JCtV8

His ready, warm smile and the ever-present twinkle in his eye were emblems of what Desmond Tutu offered to the world—universal kindness, genuine forgiveness, a deep well of joy and an unshakeable belief in people’s potential for change.

He shared his faith by continually showering his gifts on all of humanity. May we remember and use them well.