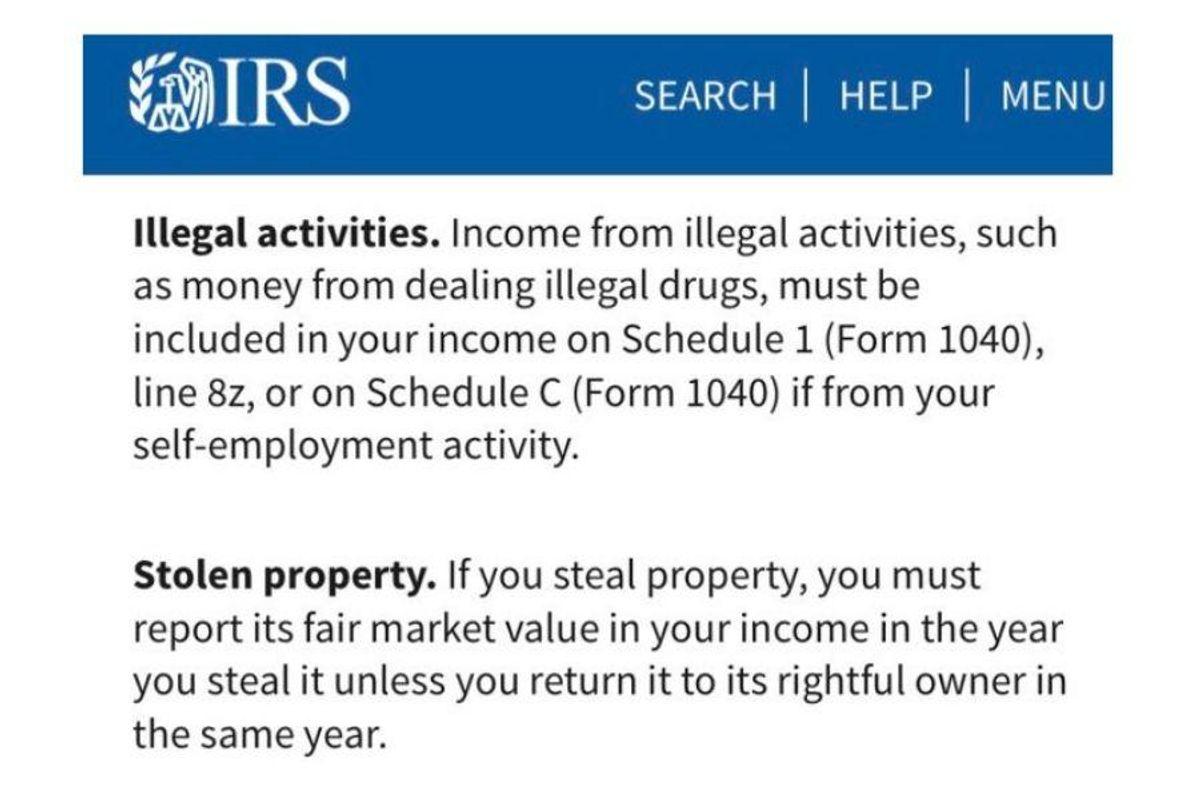 You know how sometimes you see something come through your social media feed and you think, “There’s no way that’s real,” only to then have your mind blown when you find out it actually is real?

This is one of those times.

Stolen property. If you steal property, you must report its fair market value in your income in the year you steal it unless you return it to its rightful owner in the same year.”

Tax szn is around the corner. Remember to report your income from illegal activities and stolen property to the IRSpic.twitter.com/c4S1yMZJLz

Surely this is made up, right?

Nope. Go here: https://www.irs.gov/publications/p17. Do a “Find” search with your browser and enter the word “illegal.” Then put in “stolen.” You’ll find the entries listed under “Other Income,” worded just like this.

We can all agree that taxes are overly complicated, and few of us have the time to read through every single IRS publication to figure them out. But requiring criminals to report illegal activity and stolen goods on their taxes? Really?

That was my first thought upon seeing these tax requirements.

However, as it turns out, there actually is a good reason these policies exist. Illegal income does get reported sometimes, namely when someone has been caught (or thinks they’re about to be caught) in some illegal activity and they don’t want to get hit with a tax evasion charge in addition to whatever financial or property theft crime they’ve committed.

According to CNN Money, New England accountant Tom Hughes paid taxes on money he stole from his clients in 1999, 2001 and 2004. “I knew the money was taxable, there was no doubt about that,” Hughes told the outlet. “I had already been caught, and I didn’t want to face federal tax charges.”

However, Hughes is the exception, as tax experts told CNN that most criminals don’t report their illegal incomes. Duh. According to San Francisco tax attorney Stephen Moskowitz, most of those who do are facing embezzlement charges and are trying to avoid Al Capone-ing themselves. He has helped some of those clients document their illegal gains to avoid doubling their legal trouble due to illegal tax activity.

I see this ridiculed a lot, and it is funny on the face of it, but it’s not a ridiculous thing. In order to bust someone for evading taxes on income from illicit activity, you have to have a rule against it. Anti-murder laws also seem funny from a certain angle.

So basically, we have to have official tax requirements for illegal income in order for criminals to not be able to get away with tax evasion for that income. Still seems like a bizarre policy to actually write out in words, though, even if it makes sense from a legal perspective.

Humans are weird and money is weird and both things just seem to keep getting weirder. Yay us.