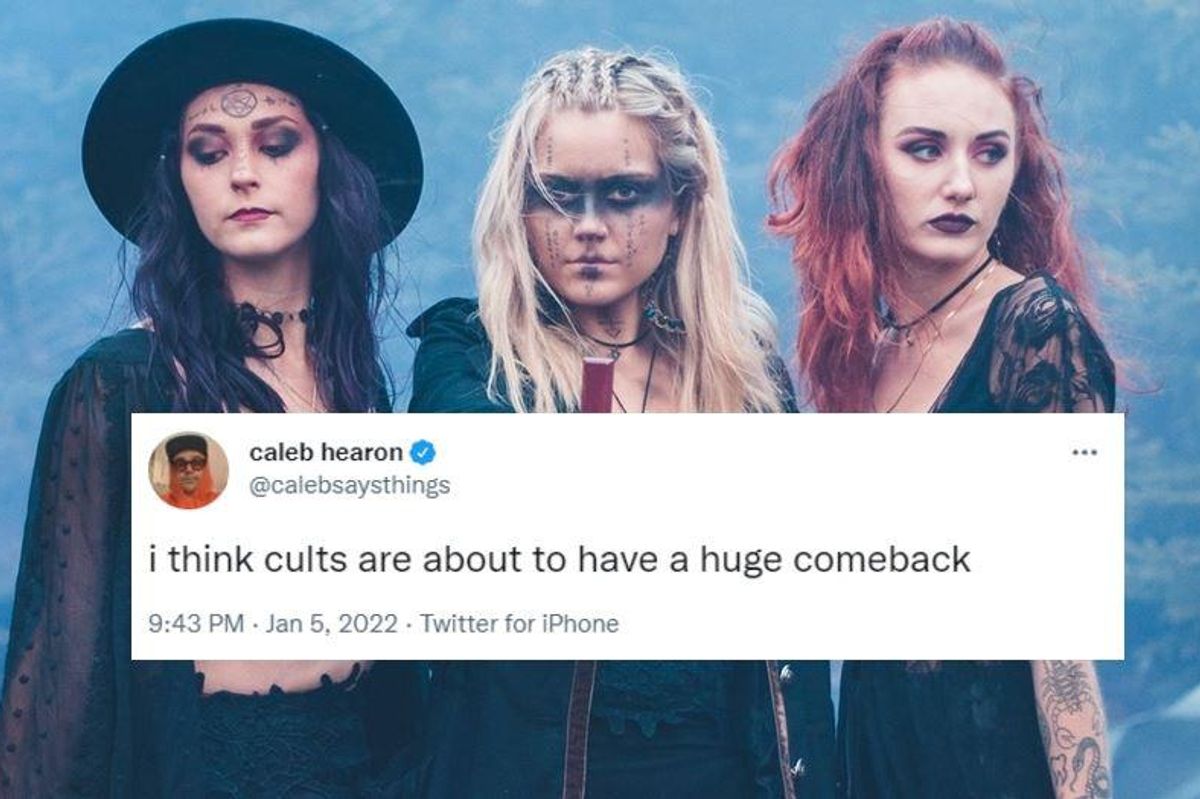 Things have definitely taken a turn for the weird in America over the past few years. So much so that I’ve had many a morning where I wake up with the John Lennon song, “Nobody Told Me” stuck in my head.

There’s been political unrest, ecological disasters, that weird monolith that popped up in the Utah desert and super credible-looking UFO videos.

The sheer absurdity of it all prompted comedian Caleb Hearon to tweet “i think cults are about to have a huge comeback” on Wednesday and a lot of people agreed with him.

i think cults are about to have a huge comeback

It’s been said that people often join cults to soothe their fears and anxieties. If that’s the case, then Hearon may be right. A recent study found that there was a 26% increase in anxiety worldwide in 2021 due to the pandemic.

To make things even more interesting, there are many who feel anxiety about the pandemic ending because they don’t want to go back to normal.

Hearon’s tweet kicked off a great discussion on Twitter on whether or not we’re already in the midst of a cult renaissance.

We’ve already got the clothes down.

Target has the outfits ready pic.twitter.com/rzrRm3IXDp

the seeds are there https://t.co/5NVmFRu7sR

Yeah, but if the fashion is this good, sign me up. I am not doing that prairie dress garbage even if it is in style. I want that nutso, futuristic Zardoz dancing around a glowing orb and chanting stuff.

Is the internet already a cult?

We need to bring back old school cults. I’m tryna join a sex commune not a Facebook group.

Is it happening already?

I definitely think communes will, and yeah, many will turn into cults. I see anti-cell phone communes becoming a big thing.

I mean, have you ever worked at a tech company?

For real I went through the new hire orientation at Tesla years back when I was desperate for work and the it was the most cultish shit I’ve ever seen in my life. I quit before I ever started working in the factory

The cult of NFT pic.twitter.com/geh9LoCAIX

Some folks are down already.

should we get in early? what’s the play?

It would be great if there was some sort of directory so we could all pick the one that’s right for us.

Hope so, looking for a good way to offload all these velor tracksuits I’ve been holding onto…

If you in Minneapolis and in a cult, I’m available. hml

They sound relaxing and homey at this point. Quaint, even.

Cult leaders hit me up I’m lonely desperate and wealthy

What cults are we talking about?

You thinking any legacy cults mounting a comeback, or are we talking all new players?

Like waco cults or meet in the forst at midnight during a fullmoon for ritual cult?

What society needs more than anything right now is “family”. You can join mine if you’d like

After reading the responses it looks like Hearon wasn’t far from the truth. A lot of people raised their hands and said “I’m in” after thinking about the potential benefits that come with being in a cult.

While others claimed there are plenty of cults happening right now, it’s just that people don’t know they’re in them.

Steven Hassan, author of “Combating Cult Mind Control: The Guide to Protection, Rescue and Recovery from Destructive Cults” and a former member of the Moonies, no less, says that there are essentially four types of cults: behavior control, information control, thought control and emotional control.

He also says that just about anyone is susceptible to being the victim of a cult.

“If you think it could never happen to you, then you’re the most vulnerable. Because nobody’s impervious,” he says.

If Hearon is right, there may be some super culty stuff happening all around us in the coming months. If you’re not down for the cult lifestyle, then it’s best to keep your eyes wide open for suspicious groups gathering in unlikely places.