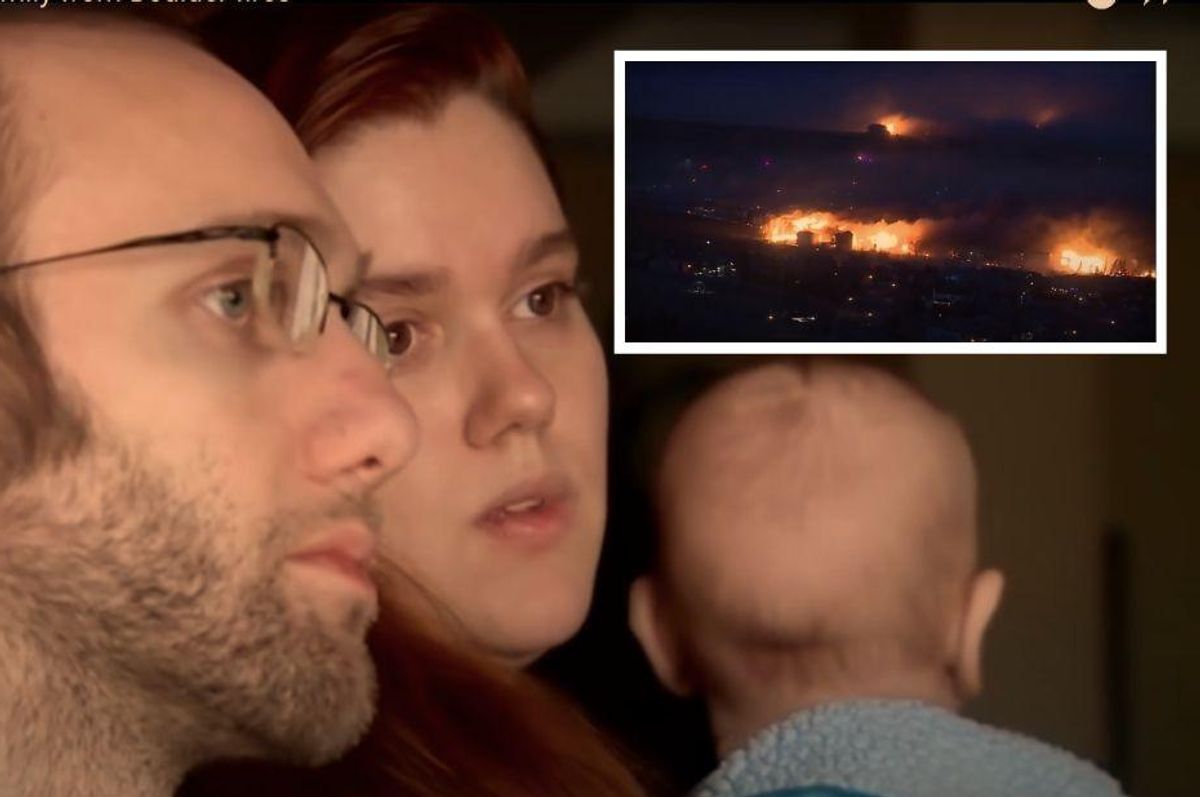 As the world prepared to ring in 2022, tens of thousands of people near Boulder, Colorado were being evacuated from their homes due to an unprecedented winter blaze that tore through their community December 30. The Marshall Fire took out entire neighborhoods at incredible speed, burning more than 6,000 acres in less than 24 hours and destroying nearly 1,000 structures.

It was a terrifying disaster, with families having just minutes to flee their homes as the flames raged toward them at speeds of up to 100 miles per hour.

Mary and Taylor Stanley were in their home in Superior, Colorado with their baby when they found out the fire was headed straight for their house. “We look outside and there’s thick smoke in the air,” Mary told Fox 31 News, “and we can see it crawling, the flames and the smoke, just crawling toward us.”

They only had five minutes to get out of the house.

“While I was gathering our belongings, my husband ran out and tried to start the car,” Mary Stanley wrote, telling the story on GoFundMe. “It was dead. He then ran to the neighbor’s house and began banging on the door to no avail. He ran back home and said ‘we have no way out of here we have to try to make it by foot’ while hundred mile an hour winds blew the fire through the shopping center right across the street from our house and smoke covered everything.”

Just as the Stanleys were gathering belongings to take with them, an Amazon driver named Luanne showed up to deliver a bike pump Taylor Stanley had bought since their car was out of commission. She asked the couple if they needed help, and they told her they had no way to get out of town except on foot.

“A violent gust of wind then slammed against our gate, causing the door to become lodged inwardly,” Mary wrote. “We tried to pry it open and we couldn’t, so my husband began throwing items over the 8-foot tall fence and then climbed over it himself. Thank God we had gotten the baby and most of the belongings out before that happened. She [Luanne] then gave us a ride to the community center where we were safe from the smoke, fire and winds until our best friend could come get us.”

Later, the Stanleys would find out that their house was a total loss, burned to the ground like hundreds of their neighbors. But they were grateful they got out in time with Luanne’s help.

“It was just one of those miracles that happened on both sides,” Luanne said when the Stanleys called to thank her.

“We could be dead if it wasn’t for Luanne,” Mary Stanley told Fox 12. “She was our saving grace. A little angel right at the moment that we needed her.”