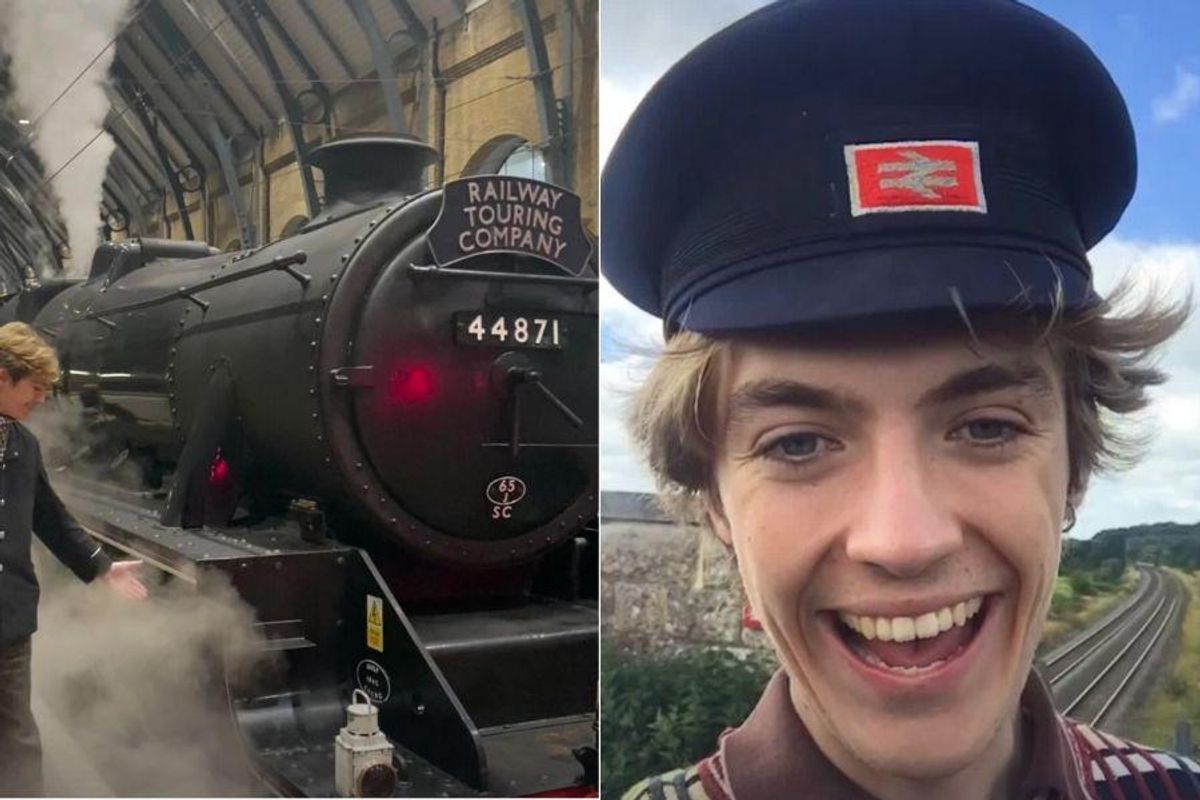 There is truly no end to the bizarre and delightful pockets of TikTok. Whether you’re watching someone put literally anything under a microscope, discovering how to make oreo mug cake or enjoying the simple pleasures of witnessing amazing cleaning transformations, the possibilities for entertainment are endless.

This 20-year-old trainspotter and TikTok star, Luke Nicolson (better known as Francis Bourgeois), is certainly no exception to this.

Even if you could care less about trains, the unbridled, child-like enthusiasm that Francis has for them is so contagious that you might find yourself looking longingly at a railroad. Or at the very least, in better spirits after hearing his infectious laugh.

Often with a go-pro strapped onto his head, Francis waits in heightened anticipation, raves over tones and chats up the drivers, who seem equally happy to see him.

Most of the time, he simply can’t contain himself once the train arrives, as indicated by the bursts of pure glee that come from him as a new train approaches. And that’s just the way his millions of followers like it.

“It’s the sound of the engines, the honks, the wheels on the tracks, they’re therapeutic noises, “ he tells The Face. “As for the railways, there’s a satisfaction in the way they line up, the way something so huge is on a direct path. On a deeper level, there’s something [special] about how the direction of a train is predefined – you know where it’s come from and where it’s going to go.”

Luke spent his childhood in North West London immersed in his passion, even drawing pictures from memory of the trains he had seen passing by at the station (The Tab).

Often as we approach adulthood, that certain zest for our childhood hobbies begins to fade. Or rather, it gets suppressed. Luke too felt the pressure to conceal his interests in order to blend in once he got older.

However, once he began his engineering degree at Nottingham University, things changed.

@francis.bourgeois Class 158s are amazing, if you’ve been on one, you will know they’re good! 😊 #trains #trending #fyp ♬ original sound – Francis Bourgeois

“Coming to university, I’ve turned a new page and allowed my passions to [flourish] and not be held down. It’s made me a lot happier,” he told The Face.

@francis.bourgeois I found an awesome new train spotting location where you can wave at the commuters coming back from London! #trains #trending #fyp ♬ original sound – Francis Bourgeois

Coming more into his own, along with a dose of lockdown boredom, helped Luke come up with the idea. And thus Francis Bourgeois (presumably named after a court painter for George III) was born.

Many thought Francis’ larger-than-life person was too good to be true, and accused him of being a fake, particularly after photos of his younger self emerged. Francis posted a response video. And it is not only a masterclass in authenticity, it also sheds light on just how powerful the urge to fit in can be, and how we are so routinely compelled to silence that inner child.

And sadly, many of us can struggle to bring that light back, once it’s squelched. However, seeing people like Francis rekindle that innocent spirit makes things seem so much more hopeful, and I think that’s a major aspect of his appeal.

His fame might have taken off as a result of a few fake Insta lives with celebrities like Billie Eilish, but the true lasting power of Francis’ account is thanks to the endearing charm, wholesome devotion and genuinely loveable demeanor of his personality.

It’s a certain lust for life that makes Francis’ videos so profound. It’s hard to not find yourself wanting to discover your own passion after witnessing his.

Francis might be a mostly local celebrity now, but as is the magic of TikTok, his local celebrity status has transcended after being discovered by a talent agency. So who knows, maybe we’ll spot this trainspotter on his very own television show. I’d certainly watch it.

In the meantime, his TikToks continue to be amusing, uplifting and inspiring.