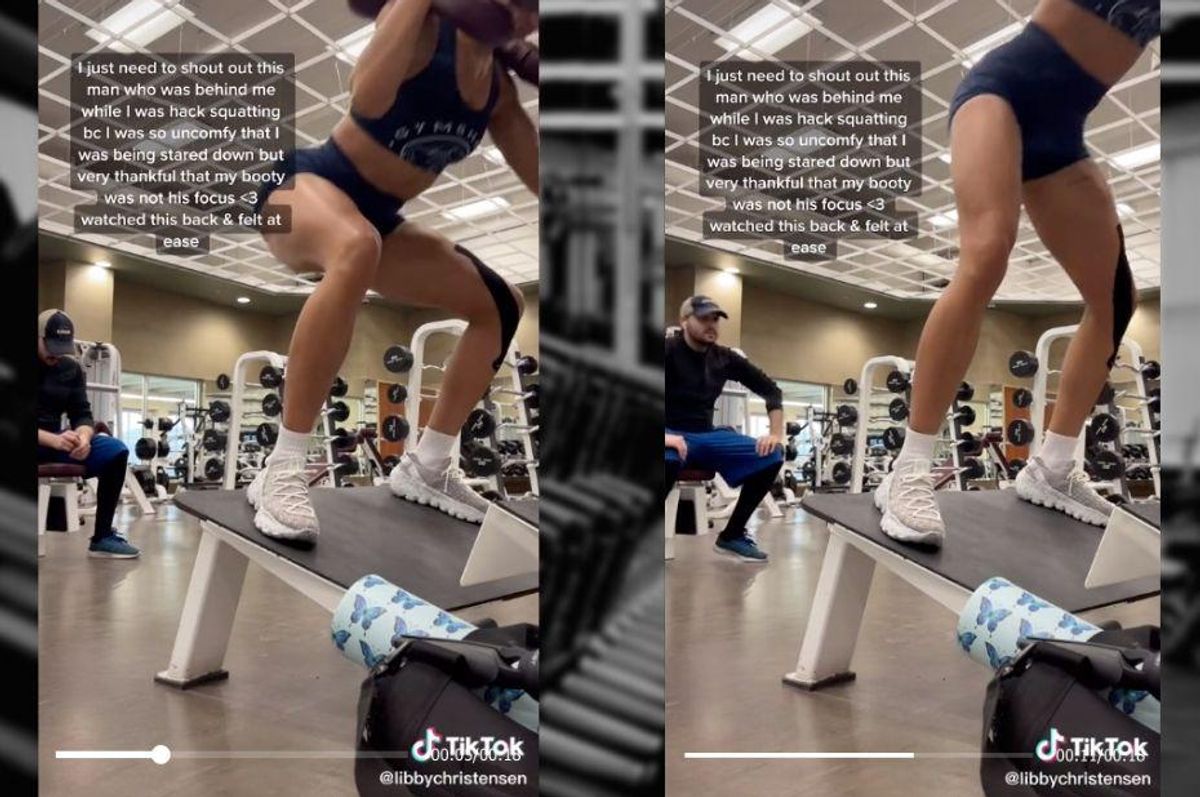 Videos of creepy guys staring at or harassing women at the gym are plentiful, and their virality underscores how common such experiences are. However, we don’t often see the opposite go viral—the guys at the gym who aren’t creepy, who are aware of how their behavior is perceived and who do what they can to make women feel comfortable while they’re working out.

Now a video of one of those guys has gone viral.

TikTok user @libbychristensen shared a video she took of herself doing squats on a machine at the gym, which happened to catch a man who was working out directly behind her. (If you’re wondering why she was filming herself, some people record their workouts to check their form. Christensen said in the comments that she films each set from a different angle—it wasn’t about catching someone else on film.)

The video shows the guy directly facing her from behind (nice choice of set-up, gym) but looking down at the floor before lying back onto the bench press.

The video includes “The Golden Girls” theme song, “Thank You for Being a Friend.” Christensen wrote that she’d been feeling uncomfortable while doing her hack squats, thinking someone was staring her down. She was thankful to see that the man behind her was looking at the floor and said watching the video back made her “at ease.”

“[Thank you] for your service kind sir,” she wrote in the caption.

The video has been viewed 4.5 million times and has garnered thousands of comments.

“That’s called the ‘ah yes the floor is made of floor,'” wrote one commenter.

“I think there’s more guys doing everything they can to make sure it’s very clear they’re not staring at women in the gym,” wrote another.

“Most dudes are like this,” added another. “This is our special moment to appreciate the nice flooring.”

“This is gym code 101 for any decent guy. Head stays looking at the ground or your phone till you’re done with the set 😂,” wrote another.

Some commenters criticized Christensen’s clothing, suggesting she shouldn’t wear tight clothing if she’s uncomfortable with people looking at her. “Wear baggy clothing if you’re uncomfy,” wrote one person. However, others were quick to point out that clothing choice isn’t an invitation to be a creep.

“Why are we focusing on her clothing,” wrote one person. “People still get harrassed or assaulted in things other than ‘skin tight’ attire.”

“I feel like some of y’all won’t be satisfied till females are wearing sweats & a turtle neck to the gym,” wrote another commenter.

“WERE ALLOWED TO WEAR WHAT WE WANT. I wear a huge T-shirt and baggy shorts and still get stared at goodbye,” wrote one person.

“These comments… wearing cute gym outfits literally improves my workouts,” wrote another gym-goer. “Yes it’s okay for people to look! But to stare and be a creep is not okay!”

Most women know there’s a difference between someone taking a quick look at a person and staring creepily at them. It’s the latter that needs to stop. And women pointed out that they notice and appreciate the guys who are clearly trying to be gentlemen and not even come close to gawking.

“I always appreciate when they do this. I always notice too like thx for not making me uncomfortable lol,” wrote one commenter.

“Anytime I’m in this situation I always try to start my set the same time he does so I don’t make him uncomfortable” wrote another. Several commenters pointed out that he was likely uncomfortable in the situation as well, and Christensen wrote “I think he and I were trying to do the exact same thing which is how we got this result 🤝😅”

“Some are so nice and ask if it’s okay to workout on the machine behind me,” wrote another. “A lot of the regular creeps at the gym I’ve learned to ignore.”

Bottom line: It’s really not that hard to not be creepy.

As this guy shows, it’s not that hard to avoid being or appearing to be a creepy ogler. Most people aren’t going to be bothered if you just look at them briefly, but staring really is uncomfortable. Women are going to wear gym clothes at the gym, and gym clothes are often fitted and minimal for freedom of movement, reduced chafing and ability to see muscle engagement. Gym attire isn’t an excuse to stare at someone while they’re working out.

Thanks for being a good example, random gym guy.