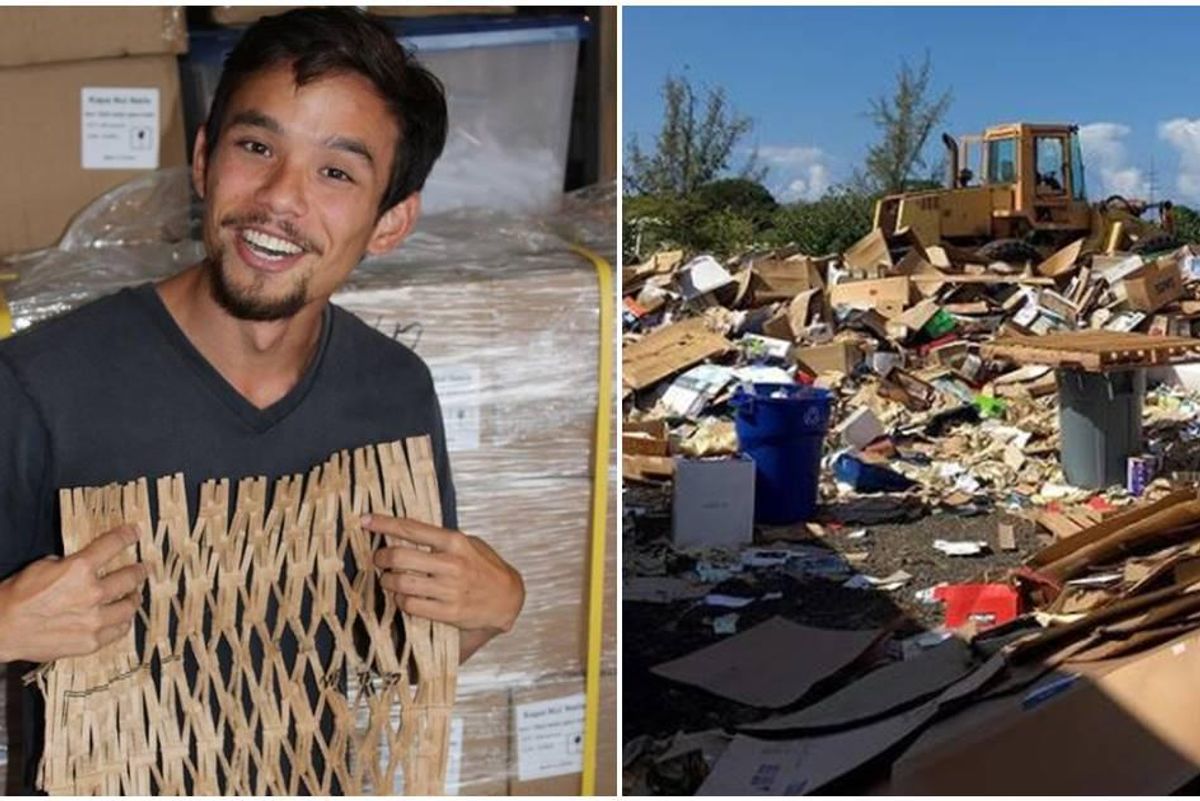 The United States generates an incredible amount of paper and cardboard waste every year. The most recent EPA statistics from 2018 found that Americans throw away 67.4 million tons of paper and paperboard a year. Sixty-eight percent of it is recycled, with the remainder being dumped in landfills.

Cardboard will eventually deteriorate in a landfill but as it degrades it creates methane gas, one of the largest contributors to climate change. While carbon-trapping trees are one of the biggest ways to combat climate change, over a billion of them are chopped down every year to meet the country’s ever-growing cardboard demands.

In Hawaii, cardboard waste is an even greater contributor to climate change because the state lacks adequate recycling facilities. So, all of the country’s recycled cardboard is packaged and shipped five thousand miles to Thailand to be reprocessed.

Twenty-nine-year-old Evan Lam is improving the cardboard problem on Hawaii’s Big Island by upcycling the material into useful products that keep it on the island. He sees his work as part of a larger, global trend.

“One of the biggest responses that I see happening kind of all over the world, and here in Hawaii, is localization,” Lam told Eco Watch. “The more that we can do and process and take care of things at a local or regional level that’s kind of geographically bounded, the further we can get in just eliminating sources of greenhouse gas emissions.”

Lam created CirclePack in 2020 to make better use of the Big Island’s cardboard waste. The company travels to partner organizations throughout the island where people drop off clean cardboard that is shredded on-site by volunteers. The cardboard is repurposed into a flexible, perforated mat or smaller pieces of confetti.

The confetti cardboard can be used as sustainable packing supplies, animal bedding, compostable mailers, and garden or farm mulch.

The mesh cardboard is used by farmers as a mulching to kill invasive plant species. It also works as an organic weed cover and provides a home for worms in a vermicompost. Vermicomposting uses worms to convert biodegradable waste into organic manure.

As of April 2022, CirclePack has shredded 23,534 pounds of cardboard in just over a year of operation.

Lam says that Facebook and Instagram are invaluable tools to help him connect with community groups, volunteers, and environmentally conscious people. “Instagram has connected CirclePack with both community organizations and emerging businesses who prioritize and invest in sustainability. Facebook Groups particularly have helped us connect with community members who volunteer and bring cardboard to our community shred days,” Lam told Upworthy.

Lam’s work is further proof that digital communities can have a tangible impact on local ecosystems. “I post about our community shred days in local Facebook groups and people just show up,” he added.

Lam believes that our ever-growing cardboard use and the supply chain that moves it around the world is unsustainable. “The growth of online shopping will probably increase the use of cardboard. It’s a system that needs to change, the global consumption of paper fiber is generally always increasing and we now live in a world where social, political and environmental issues are converging. We can’t continue on this pathway and not expect to experience some sort of disaster,” he told Upworthy.

“The fact that my cardboard probably comes to Hawaii from Canada and ends up being recycled in Taiwan and then can be shipped back to Los Angeles to deliver cotton from China and pears from Argentina is surreal,” Lam added. “Who is making these decisions and benefiting from them?”

There’s no end in sight for cardboard consumption, so Lam hopes to share what he’s learned from CirclePack with other like-minded eco-entrepreneurs. “I would like to inspire and inform people how to act in their own communities,” he told Upworthy. “I want people to replicate and use whatever parts of this program to fit their needs where they are. It doesn’t have to be complicated, big, or newsworthy to start doing the new, necessary things to benefit people and the places they live.”