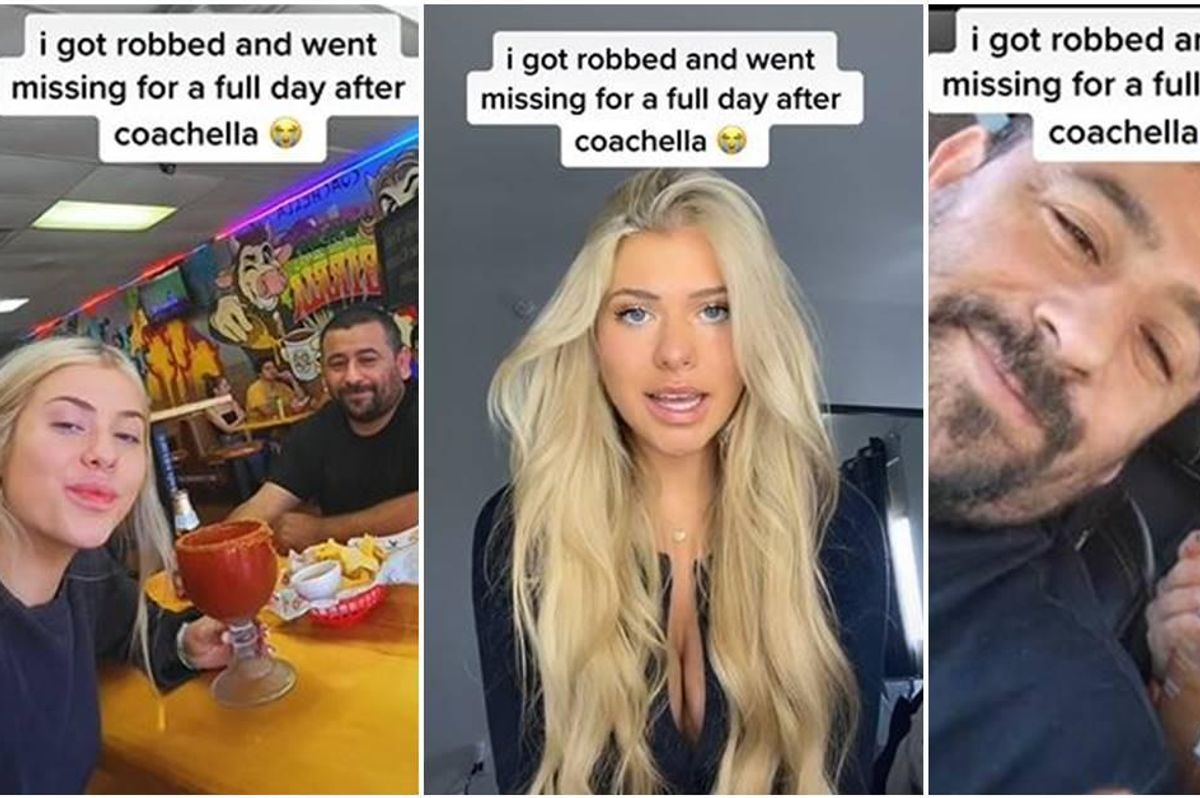 Becca Moore is a popular TikToker with over 800,000 followers who’s known for her funny, laid-back takes on dating. Like any influencer-type she was at the Coachella music and arts festival in Indio, California recently. While she was at Coachella, she was robbed of her phone, rental car keys and wallet.

“I went to Coachella this weekend and I thought this guy was kinda hitting on me but then he just robbed me,” Becca says at the beginning of her three-minute TikTok video that has nearly 4 million views. After the festival, she was left with no ride, money, or means to get in contact with friends and family. She was stranded in the desert.

Becca’s friend’s hotel called her an Uber so she could get to a local store to buy a new phone. The driver she was incredibly lucky to be connected with was a lot more than a guy with a car in a time of need, he was a guardian angel named Raul Torres from Fresno, California, six hours north of Indio.

the uber driver that saved me from going missing is @buds4u559!! 😭 after spending the day w him he told me his daughter is a senior in high school & is having a hard time going through chemo. i made a gofundme, he could’ve left me and didn’t have to help me the way he did! I’d love to help his fam give his daughter a normal end to her senior year of high school this year (prom!!) i’m putting it in my bio!!

“A normal Uber driver takes you to a place and then drops you off. He insisted on coming in with me and making sure that I was going to have a ride after that,” Becca said.

The store wasn’t able to get her a new phone because she didn’t have access to her current plan. But Raul wouldn’t give up, so he took her to the local police station where they were able to locate the Airbnb where the thief was staying. The police let them into the room and they searched it but couldn’t find the phone.

After the big let-down, Becca and Raul decided to take a break from their quest and refresh their spirits with some margaritas, on Raul. “Just because he’s an angel on this Earth,” Becca said in her TikTok video.

While the two bonded over drinks, Raul told Becca his daughter had been battling cancer and that’s why he’s been working as an Uber driver. “He told me all he wants is for his daughter to have a normal end to her senior year, and to be able to go to big events like prom and graduation,” Becca said.

Raul also revealed that his father had cancer as well.

His revelations put Becca’s troubles in perspective and made his decision to drop his driving for the day to help Becca all the more incredible.

thank god he refused to leave me 😭 raul’s tiktok is @buds4u559. also you can donate to the fam in my bio!! thank you all for your donations and generosity. you today, me tomorrow!! #TipsForRaul

After the final slurps of their margaritas, Becca still wasn’t sure how she’d get home. But Raul wouldn’t give up. “We’re getting your phone,” he exclaimed. He drove her back to the thief’s Airbnb where she found the phone sitting on top of the outside gate. Becca believes the robber abandoned the phone after realizing the police were involved. Then, Raul helped Becca get a rental car so she could get home. Before saying their goodbyes, the two had spent eight hours together.

“Raul ended his Uber shift that morning to spend his day helping me, expecting nothing in return,” she said in her TikTok video. So she used her considerable audience to ask followers to help contribute to a GoFundMe page for Raul and his family. Over the first 4 days, the campaign has raised over $144,000.

“When I was in the car with him it seemed like we were both so focused on my situation. We were only talking about me getting a phone and like things that did not matter. And he completely glazed over the fact that his daughter and his dad were the ones that needed help,” she admitted.

On Friday, April 29, Raul’s dad passed away from cancer.

The story of Becca and Raul is a great reminder that no matter how big our troubles seem, it’s always important to put them in perspective.