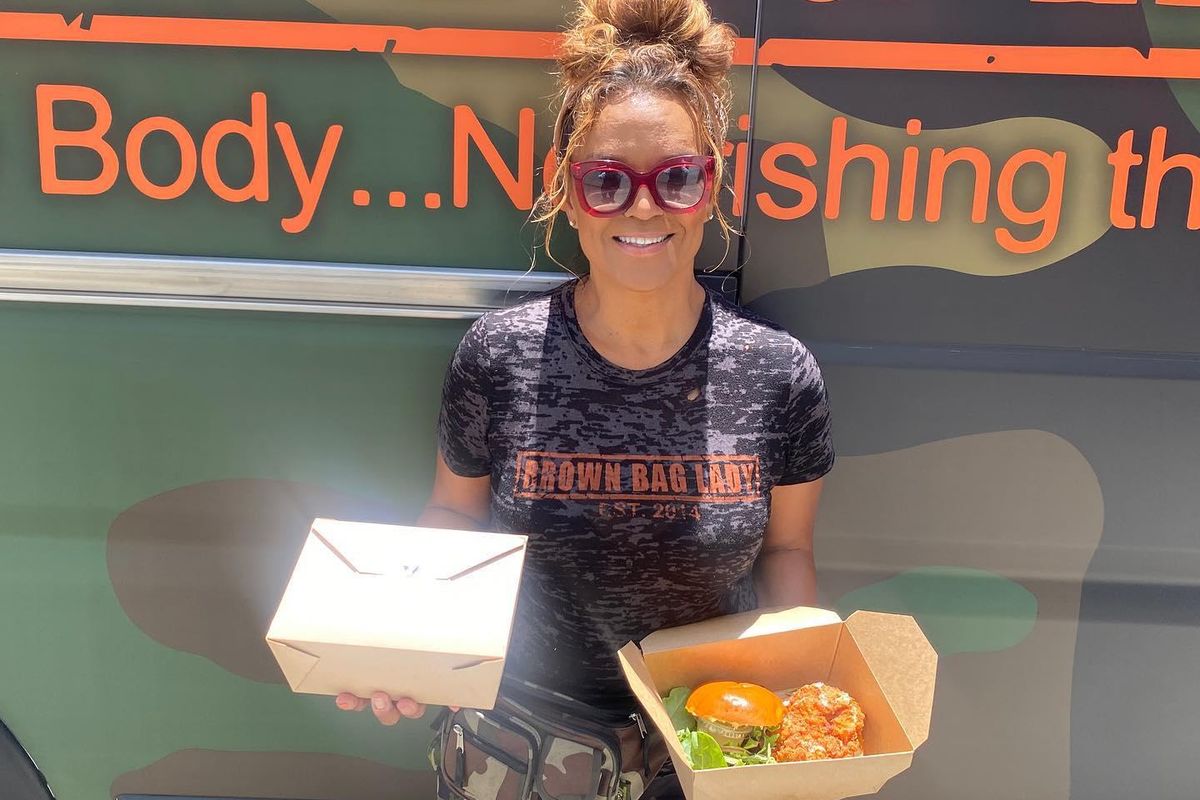 Compassion comes in many forms. Sometimes it looks like stopping to jumpstart a stranger’s car. Other times it’s volunteering time or donating. For Jacqueline Norvell, compassion looks like a delicious prepared lunch served in a brown paper bag.

Since 2014, Jacqueline, aka “The Brown Bag Lady”, has arrived on the first Sunday of every month to hand out food and supplies to the homeless communities of Skid Row. Without fail.

Yes, even with the pandemic, she and her team have never missed a Sunday. During the first few months of COVID-19, everyone showed up in hazmat suits in order to serve.

The idea for “Brown Bag Lady” sparked after leaving a basketball game in Downtown Los Angeles. Jacqueline took a wrong turn, putting her on Skid Row–one of LA’s biggest “tent cities” with a population estimated at 8,000 people.

This was around Christmas time, in the dead of winter. Los Angeles might be known for never ending sunshine, but its winter nights are not forgiving. People were huddled together just trying to keep warm. Jacqueline, compelled to help after what she saw, used the holiday bonus from her corporate job, made seventy meals, and came back. The food was gone in five minutes.

What started out as a random act of kindness during the holiday season became a year round cause. As an official nonprofit organization, Brown Bag Lady has helped feed over 75,000, partnered with major brands like Vans and Lay’s, and has garnered the attention of Kelly Clarkson and Ellen Degeneres.

They even have a fully decked out camo mini van with a mission statement painted along its sides: “feeding the body….nourishing the soul.”

“Through Facebook and Instagram, we have been able to promote what we do by telling our story through pictures and video,” she explained. “We hope that all of our efforts and all of our hard work are relayed with compassion and love. I do not have a professional social media person. Every photo and every video that is posted, I tell the story myself.”

She added that thanks to the two platforms, items are purchased from all over the country and sent to BBL’s headquarters in Los Angeles. Plus many invitations for news appearances have come straight from her DMs. Like she said, no professional needed. Just letting social media work its magic.

Though Brown Bag Lady is becoming a widespread phenomenon throughout California, the personal touch is never lost.

Each brown bag still has a lovely inspirational quote to deliver some hope along with sustenance. 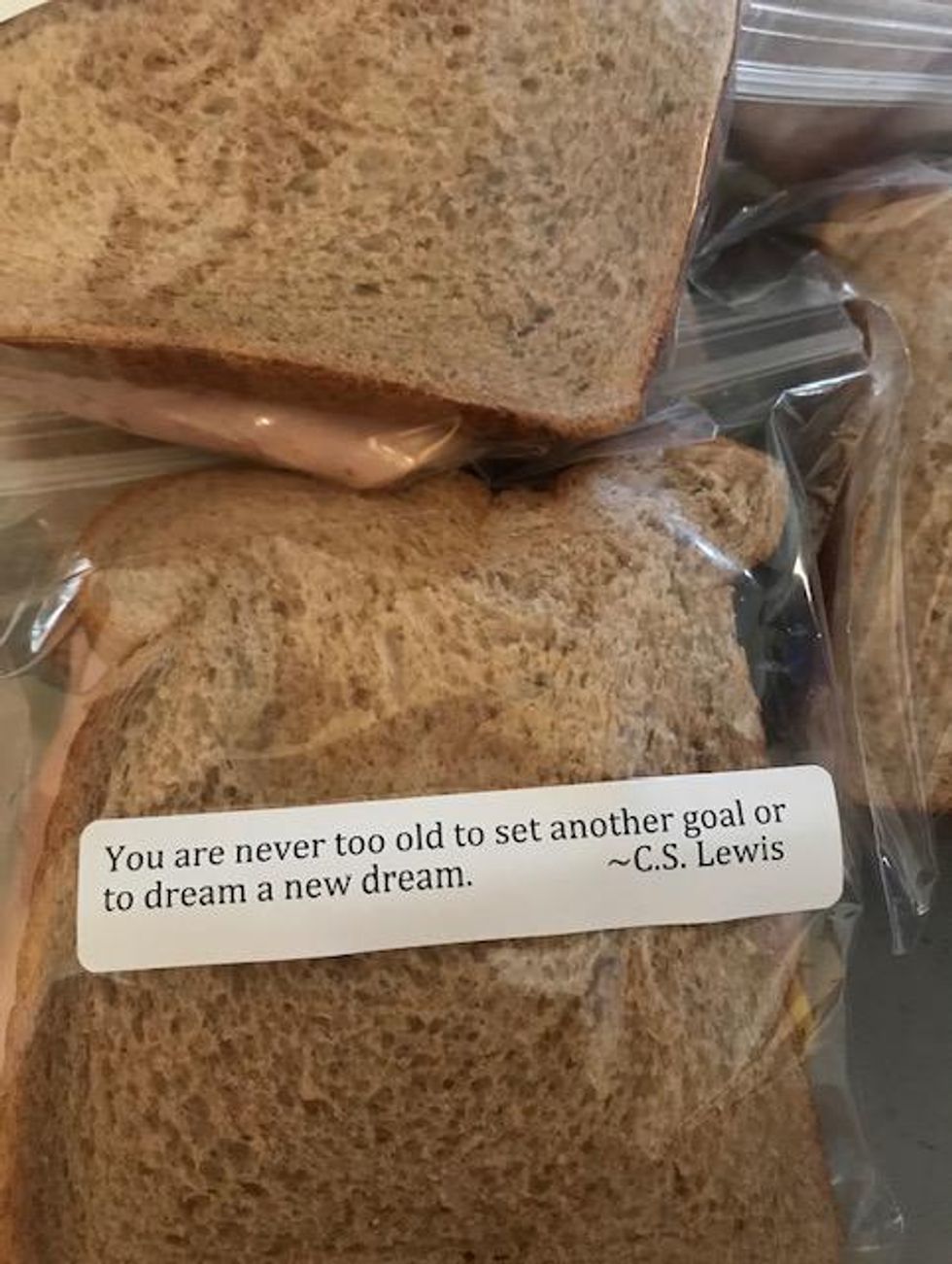 Barbers stand for hours cutting hair for free, offering people that priceless feeling of self esteem. 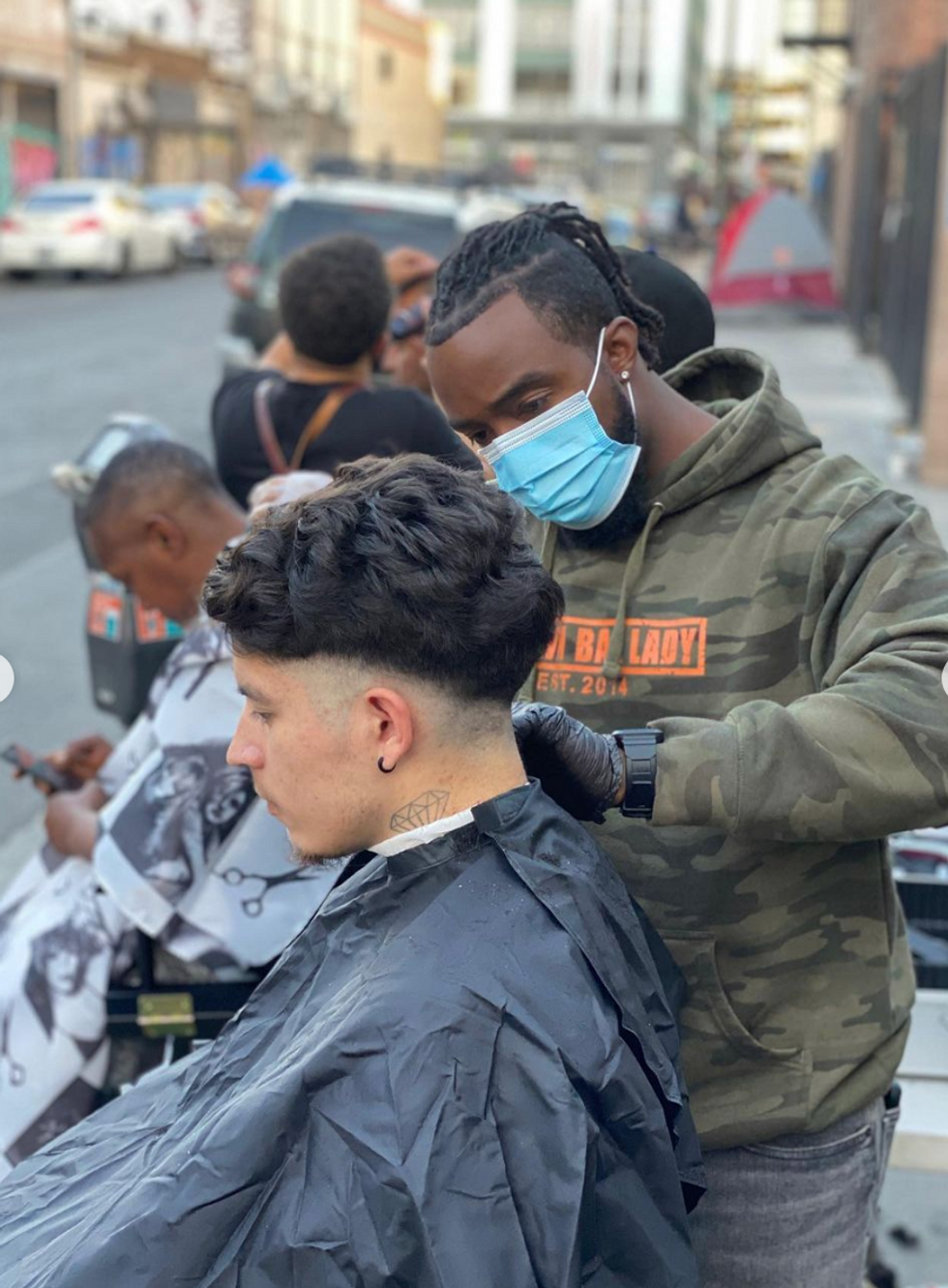 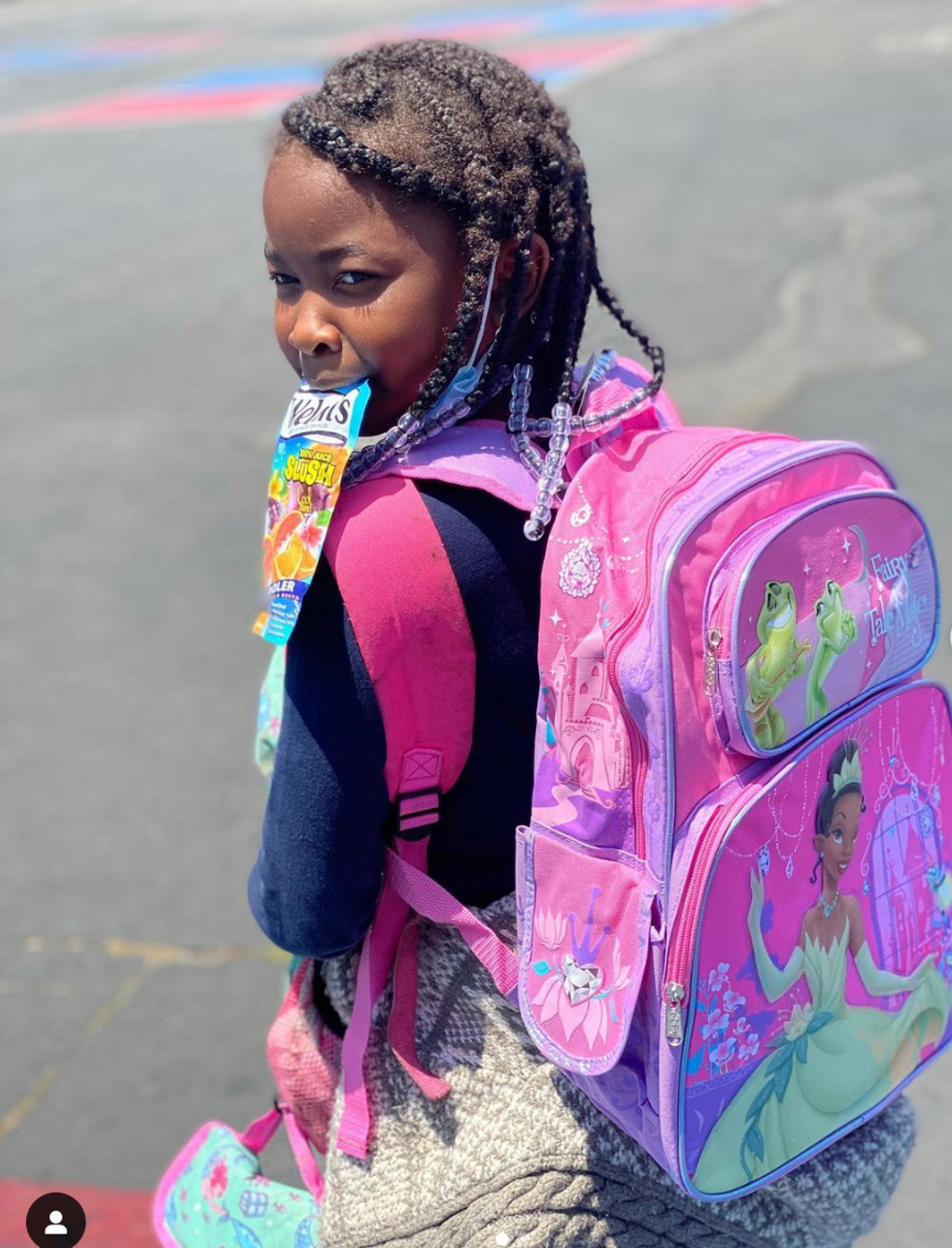 Toiletry bags get filled with soap, toothpaste, deodorant, shampoo and conditioner and distributed along with food. (Considering hygiene is identified as a contributor to mental health for un-housed individuals, this is a big one.) 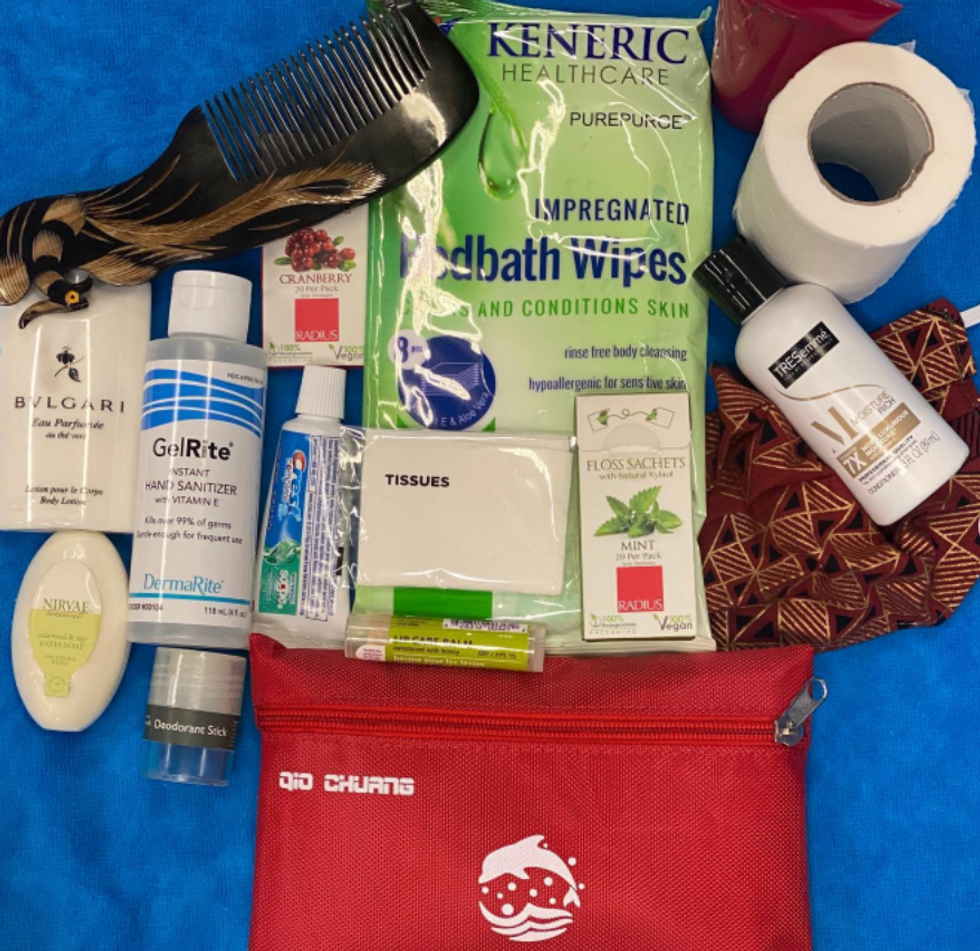 And don’t let the name fool you- the food is not your typical brown bag lunch with cold PBJ sandwiches. Nothing is ever canned or frozen. There’s a strict rule of “always fresh, always delicious.” 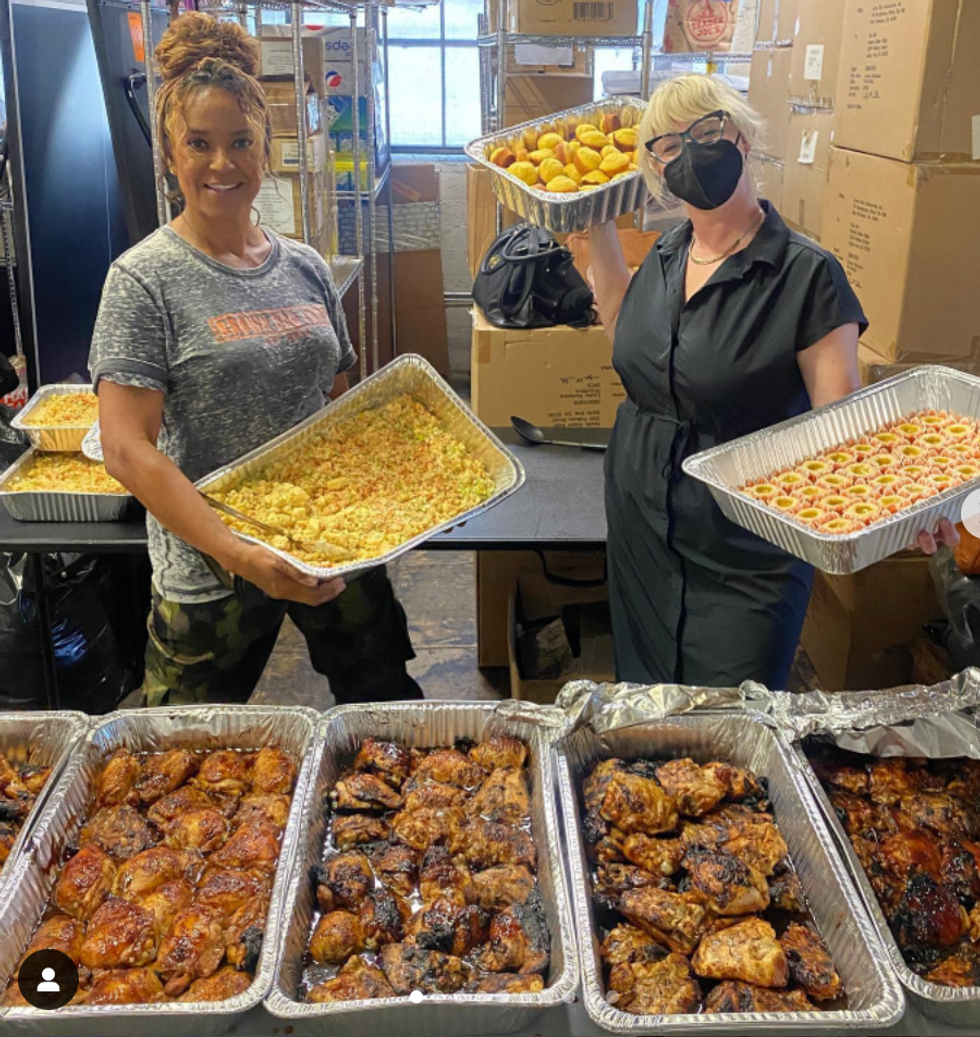 Jacqueline is also not some distant caregiver. “I try to fulfill as many needs as possible,” she told Upworthy. “If someone requests something specific I go buy it, and then I put their photo on the bag so I remember the next time that I see them.”

Below is an example of what her dining room looks like. 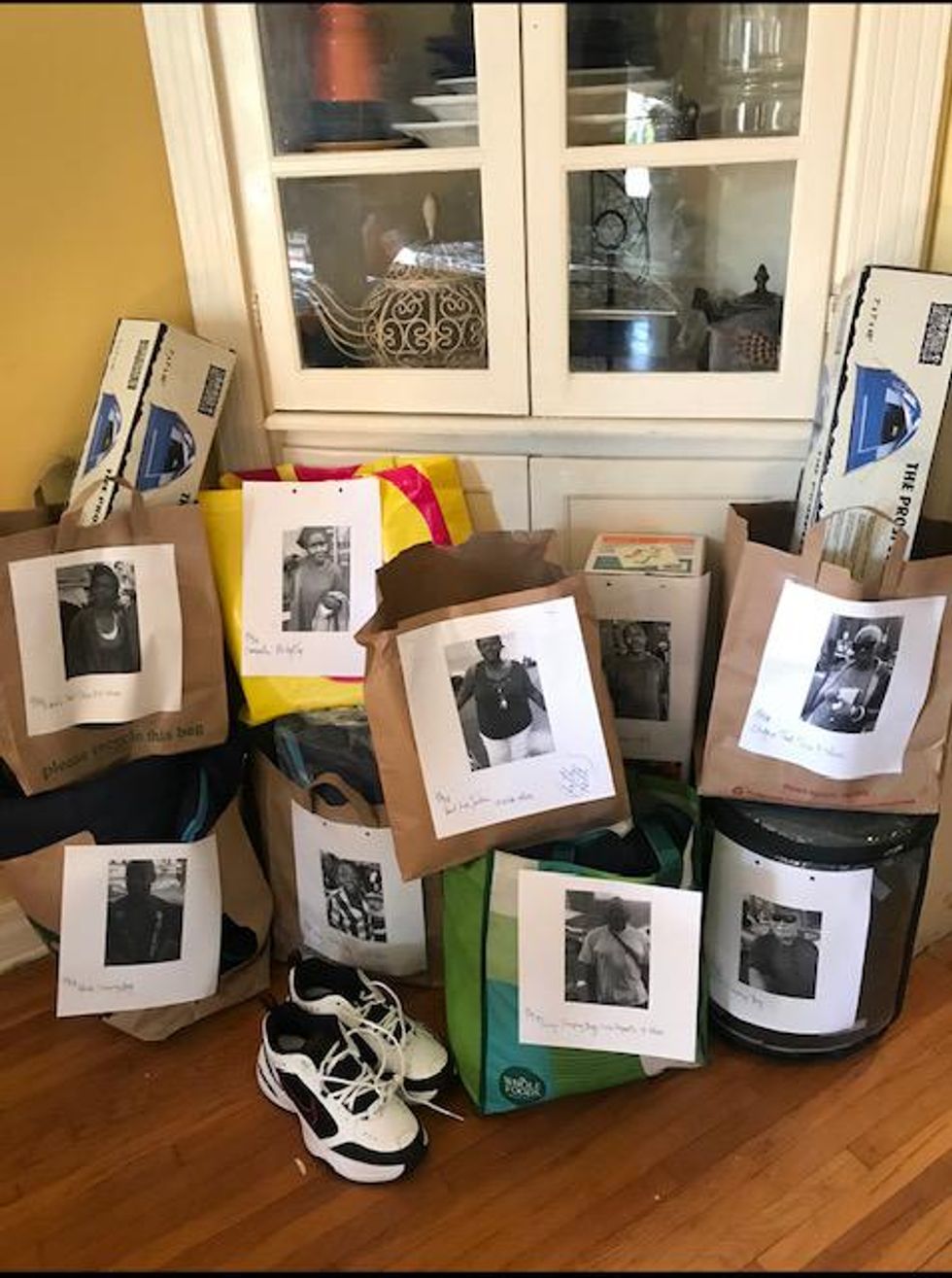 Coming to the same street corner year after year has forged actual friendships with those she helps–many even have her cell number. To this day, she still credits this as being the best part of what she and her team does.

The more her organization grows, the bigger Jacqueline’s aspirations get. The ultimate goal, she says, is to own a building with a commercial sized kitchen to allow for weekly meals, in addition to more space so that mental health services can be provided.

But in the meantime, Brown Bag Lady’s latest project is reuniting foster siblings for a one week sleep-away summer camp. And it’s a perfect example of how social media can help bring people together to bring a big vision to life.

By posting photos to the Brown Bag Lady Instagram and Facebook page, over 11K followers were made aware of a special Amazon wish list that includes items like pillows, sleeping bags, and hygiene kits for potential campers. Not only was it more possible to spread the word, but people near and far could be part of the movement virtually. So far the collective efforts have raised close to $30K. Wow.

It seems like no dream is impossible for Jacqueline and the Brown Bag Lady crew. Just like their van promises, the team is serving up some true nourishment for the soul. And it doesn’t look like the kitchen will be closed any time soon.

If you’d like to follow along the Brown Bag Lady journey, you can check out their Facebook/Instagram pages here and here