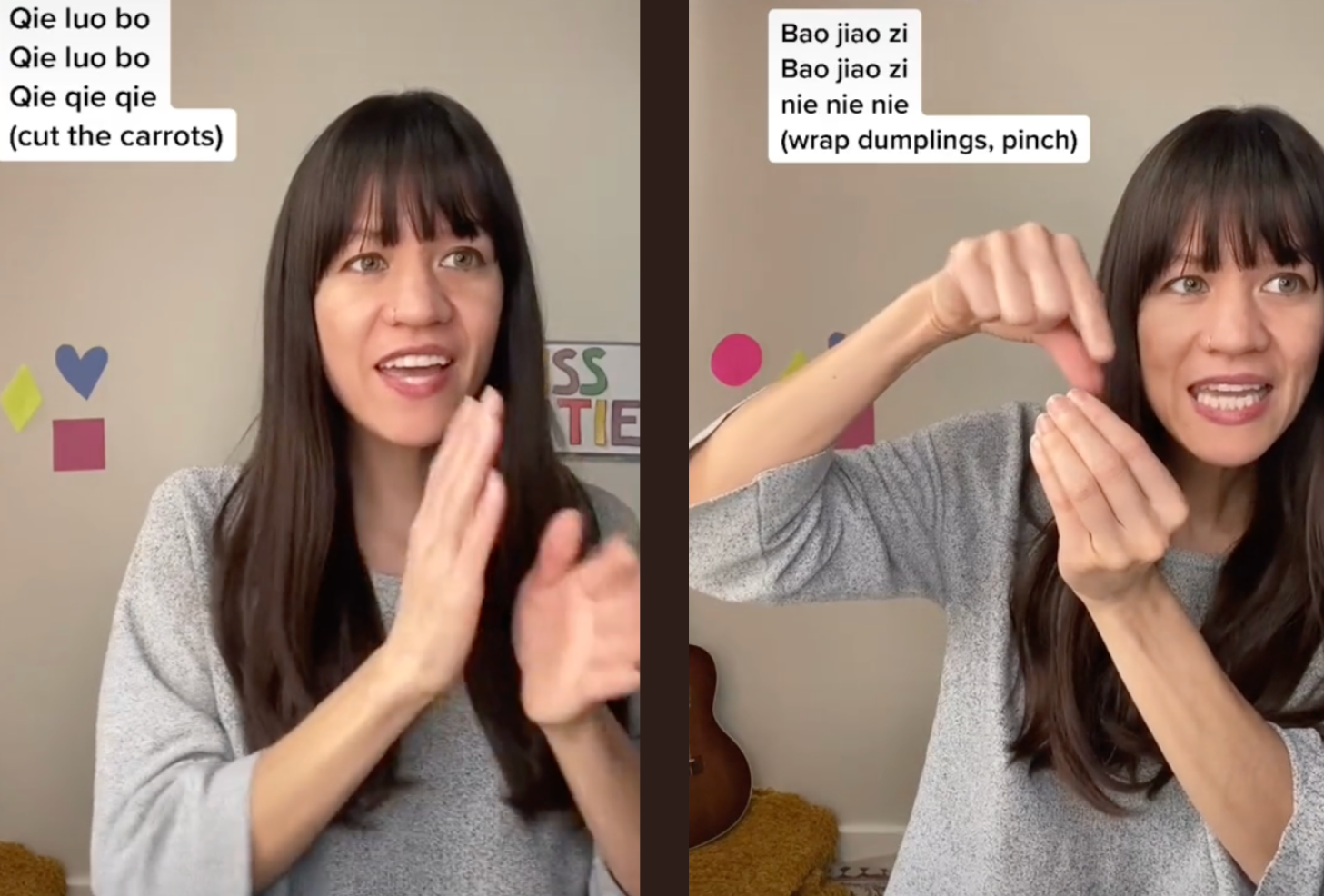 On her TikTok profile, Katie Norregaard (aka Miss Katie) describes her brand as “if Mr. Rogers and AOC had a kid.” And it’s 100% accurate. The teaching artist has been going viral lately for her kid-friendly tunes that encourage kids to learn about other cultures, speak up for their values and be the best humans they can be.

Let’s face it, some kid’s songs are a tad abrasive with their cutesiness, to put it politely. A certain ditty about a shark pup comes to mind. Norregaard manages to bypass any empty saccharine-ness while still remaining incredibly sweet. The effortless warmth of her voice certainly helps with that. Again, she’s got that Mister Rogers vibe down to a tee.

“Miss Katie” has a treasure trove full of fun creations, such as her jazz version of “The Itsy Bitsy Spider,” but it’s her “Chinese Dumpling Song” that’s completely taking over the internet.

The “Chinese Dumpling Song” is all about how to—you guessed it—make a dumpling, which Miss Katie sings with her students in Mandarin. As you can see in the video, the kids absolutely love singing it.

Norregaard told TODAY that the song is normally accompanied by a little toy dumpling to visually explain what would go inside, depending on the culture. Her aim is to instill the importance of appreciating diversity through the two languages we can all understand: music and food.

The song has racked up nearly 90,000 views and an outpouring of well-deserved internet love.

Below is a video of Norregaard singing the song along with her mother, who makes all the gestures in her hand … just like when Norregaard was a child learning the song for the first time.

The overwhelmingly positive response to the “Chinese Dumpling Song” (both from kids and adults alike) was a huge surprise to Norregaard.

She told TODAY, “I didn’t expect that first off that all the students in my class would enjoy it already. But that then it would find a place publicly in the world where so many people were connecting with it.” She added that it instilled “even more confidence and appreciation” within herself for her heritage.

In her quest to “pursue music and mindful kids’ content full-time,” Norregaard has songs about more than just food, although there are a lot of those. Every topic can become a tune—from history, to wellness, to politics.

For example, in the video below, Norregaard teaches kids about protesting. Or as she puts it, “when a group of people come together to say ‘there’s a big problem and something needs to change.’”

In the following video, she breaks down the history of Indigenous People’s Day.

Seriously, where was this when I was in school?

Her videos are often very interactive with student-led activities, like this breathing exercise:

She even has videos for parents, helping them to shape more open, productive conversations with their kiddos. In this one, she discusses the importance of telling children the mistakes of grown-ups so that they can “reimagine a better world.”

On her website, Norregaard writes, “I view making music for children to be truly radical, beautiful work.” That sentiment is evident; the amount of love she puts into what she does is truly remarkable. Her sense of purpose is what makes “Miss Katie Sings” so special. Norregaard is providing kids with vital tools to build connections, manage their feelings and better understand the world … making it a better place in the process.