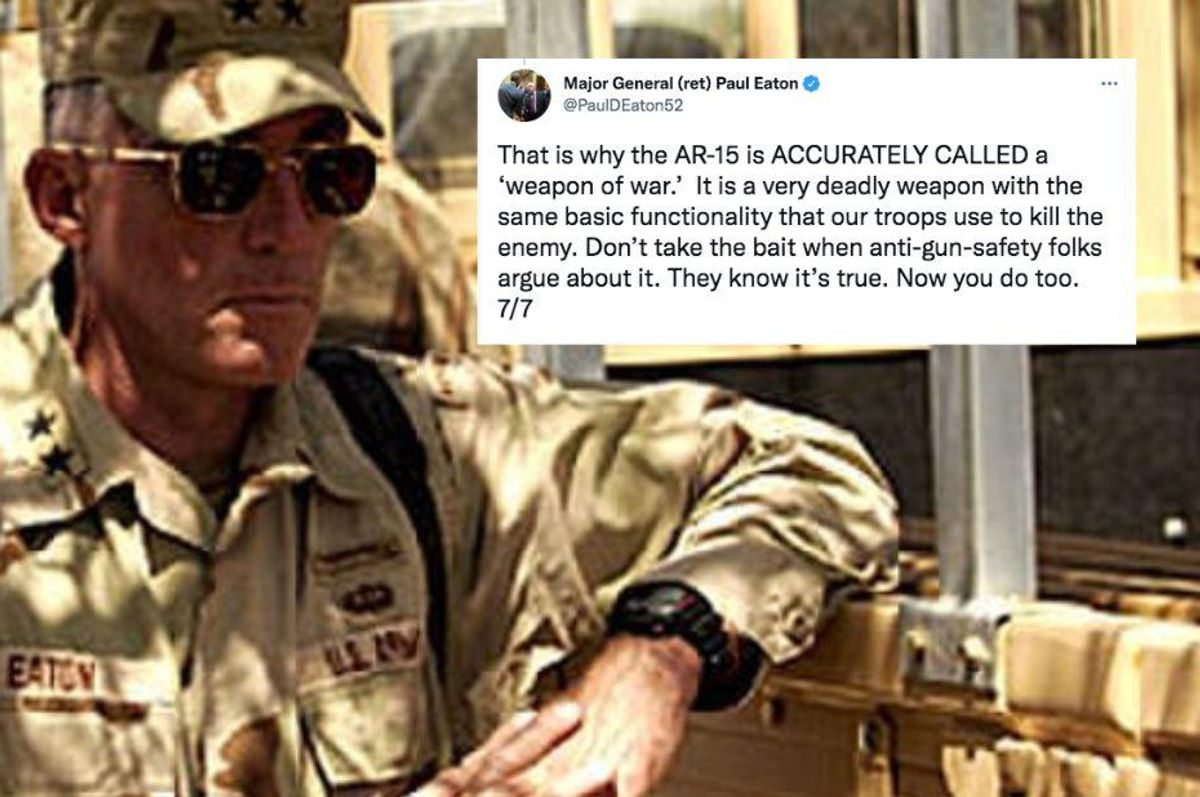 A common criticism gun rights activists levy toward gun legislation advocates is that many people who push for stricter gun laws don’t know a lot about guns themselves. That’s not wholly accurate—there are plenty of gun enthusiasts who support reasonable gun laws—but it’s true that many people who are horrified by our nation’s gun culture are not well-versed on the specifications of our nation’s 393 million guns.

Not every American is an active part of American “gun culture.” Some of us have never shot a firearm, for fun or otherwise. Some of us really are ignorant about guns themselves.

That’s why an explanation of the difference between an AR-15 and military-style firearms from retired Major General Paul Eaton has gone viral. Major General Eaton was the commander in charge of training Iraqi soldiers during Operation Iraqi Freedom, so he definitely knows what he’s talking about when it comes to weaponry.

“As the former Commanding General of the Infantry Center at Fort Benning and Chief of Infantry, I know a bit about weapons. Let me state unequivocally — For all intents and purposes, the AR-15 and rifles like it are weapons of war. A thread:

u201cThose opposed to assault weapon bans continue to play games with AR-15 semantics, pretending thereu2019s some meaningful differences between it and the M4 carbine that the military carries. There really arenu2019t. 2/u201d

Those opposed to assault weapon bans continue to play games with AR-15 semantics, pretending there’s some meaningful differences between it and the M4 carbine that the military carries. There really aren’t.

But even now, you can buy AR-15s in variable barrel lengths with Weaver or Picatinny rails for better sights and aiming assists like lasers. Like the military, but w/o the bayonet.

But our troops usually use single shot, not burst fire. You’re able to fire a much more accurate (deadly) shot, that way. Note: you can buy our Advanced Combat Optical Gunsight on Amazon. So troops usually select the same fire option available on AR-15.

That is why the AR-15 is ACCURATELY CALLED a ‘weapon of war.’ It is a very deadly weapon with the same basic functionality that our troops use to kill the enemy. Don’t take the bait when anti-gun-safety folks argue about it. They know it’s true. Now you do too.”

Eaton is not the only former military leader who has spoken out in support of gun legislation. In 2019, a group of 13 influential retired military leaders wrote a letter to Congress, pushing it to pass the Bipartisan Background Check Act.

“Each of us has, at some point in our lives, made the choice to risk our lives for our fellow citizens and place ourselves in harm’s way,” they wrote. “We were trained, we were coached, and we were prepared for the dangers that we chose to face. This is not the case for most Americans, yet they continue to face danger on the sidewalk, in their homes, at school, and at work. It is in the same spirit that led us to serve in the armed forces that we ask you, our elected leaders, to help protect the American people from gun violence here at home. We urge you to support this legislation.”

Police leaders have also voiced strong support for gun legislation, which makes sense considering how much harder and more dangerous our free-for-all gun culture makes their jobs. The International Association of Chiefs of Police, the largest professional association of police leaders in the world, has a position paper that outlines the gun safety laws it supports, including firearm offender registration, waiting periods, closing the gun show loophole, banning semiautomatic assault weapons, armor-piercing ammunition, bulletproof body armor and more. The IACP states that these are “common sense policies that would assist in reducing gun violence, while upholding the second amendment.”

Yep, the largest police leader association supports banning semiautomatic assault weapons like the AR-15. Here’s what it has to say about that:

“First passed in 1994, the assault weapons ban required domestic gun manufacturers to stop production of semi-automatic assault weapons and ammunition magazines holding more than ten rounds except for military or police use. While the ban was in place, it was remarkably effective in reducing the number of crimes involving assault weapons. In the period of the ban, (1994-2004) the proportion of assault weapons traced to crimes fell by a dramatic 66 percent.”

If those who oppose gun legislation don’t want to listen to people who don’t know enough about guns to speak authoritatively on them, that’s fine. Perhaps they should listen to these military and police leaders who not only know guns inside and out, but who also have the firsthand experience on both sides of the barrel to speak authoritatively on what can help minimize America’s gun violence.