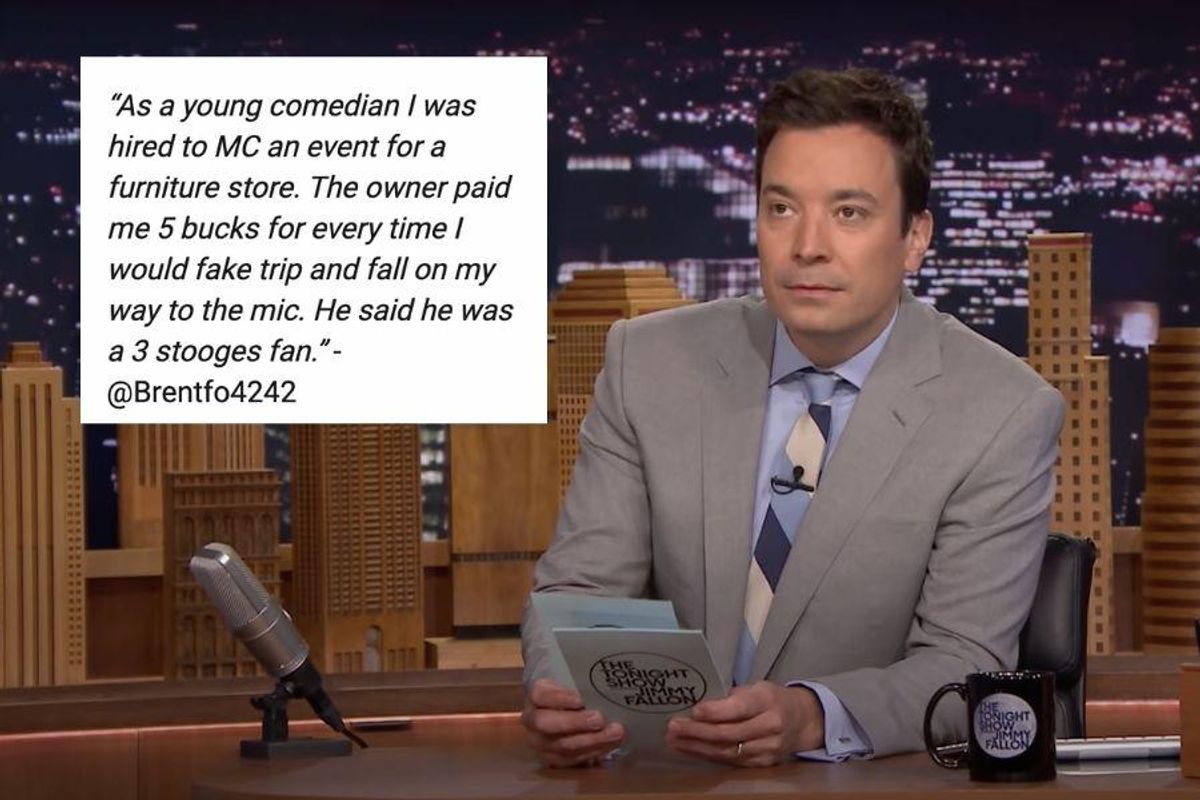 Call it a rite of passage, a baptism by fire, or simply a necessary evil, but a terrible summer job is pretty much a staple of young adulthood. Those concert tickets aren’t gonna pay for themselves, after all.

Some summer jobs are heinous by the sheer amount of manual labor involved. Others are just plain weird. I remember one year working as a “live strolling table.” Yep, just walking around attached to an elaborately dressed table offering hors d’oeuvres and champagne. A human-furniture hybrid. How do you put that on a resume?

No matter the role, there is one thing all summer jobs have in common: They teach us humility in one way or another … especially once we see that first paycheck. There’s simply no way to prepare for seeing two weeks worth of hard work equate to a (usually) paltry sum. Hopefully that experience alone makes generous tippers of us all.

Jimmy Fallon recently asked people to share their own “funny, weird, or embarrassing story about a bad summer job” as part of his iconic #hashtags challenge.

Here are 15 that might make your own summer job memory feel a little less dreadful:

“I planted trees for the US Forest Service one summer in HS. Our foreman would go through our lunches, eat our cookies and chips, and take bites out of our sandwiches. We were all about 15 so too afraid to tell.” – @dumpster_diva

“One summer I worked at Taco Bell during lunch and Furr’s cafeteria during dinner. People would see me at both and ask if I was twins.” – @kerrikgray

“As a young comedian I was hired to MC an event for a furniture store. The owner paid me 5 bucks for every time I would fake trip and fall on my way to the mic. He said he was a 3 stooges fan.” – @Brentfo4242

“I applied for a job while in high school at a toy store. I called back days after the interview asking if they had any news for me. They told me I got the job, and they forgot to tell me. They had me scheduled for that day and was told ‘you’re late.’” – @RockerSam91

“In high school, I worked at an insurance agency…let’s just say the bus ride to and from work was the best part of the job.” – @SharonZurcher

“In high school I worked at a bounce house company. My first day working was an elementary school field day and the huge inflatable slide starting deflating and collapsing with kids at the top…angry parents staring at me like I had an answer for this at 16 years old.” – @calamari_carly

“In middle school my friend and I got paid to fill, lick and seal about 500 envelopes with documents for a lawyer – a penny per envelope. 3 hours later, we asked for 2 cans of soda from his cooler. He said sure, and took $2 each from our pay. We made a dollar.” – @CameronFontana

“I babysat identical twin boys where one constantly screamed and got into mischief but potty trained early while the other was quiet, well behaved but always blowing out diapers. They never did anything ‘identical’. I’m shocked that I still wanted kids after that!” – @overbaughs

“Worked at Crumbl in high school. One coworker had the exact same shifts as me, and she was a theater kid. Like MAJOR theater kid, was cracked out 24/7, randomly performing theater at work. I am not proud to say I memorized 10 Shakespeare monologues because of her.” – @itstherealmeboo

“I held human hearts with a white cotton glove during open heart surgeries, so they didn’t ‘slip’.…No pressure! That’s why l am now a planetary medium and asteroid deflector. Much less stress.” – @rosamalvaceae

“I worked for a local sweet corn farm. I had to sort the corn into boxes for their stands around the state or local grocery stores. It came off the truck onto a conveyor belt by the 1000s. I literally saw thousands of corn cobs in my dreams at night.” – @jdianemiller

“In high school my mom got me a job working with the city to clean an island in the local lake that ducks lived on. Everyday I had to fight a duck, and everyday I needed a bandaid after getting bit by a duck. It was a nightmare and I still hate ducks 30 years later.” – @KingSergioS

“Hired at an amusement park for the summer, taking summer college classes at the same time…Show up for my 1st day to a supervisor who says ‘Oh, the girl who didn’t show up!’ Proceeds to show me the previous week’s schedule where I had 40 hours during my class time. He rolls his eyes when I explain and gives me every crappy task he can find….

…I left after the 2nd day, never picked up my check, but kept my employee ID & got in for free all summer!” – @trixiebelle47