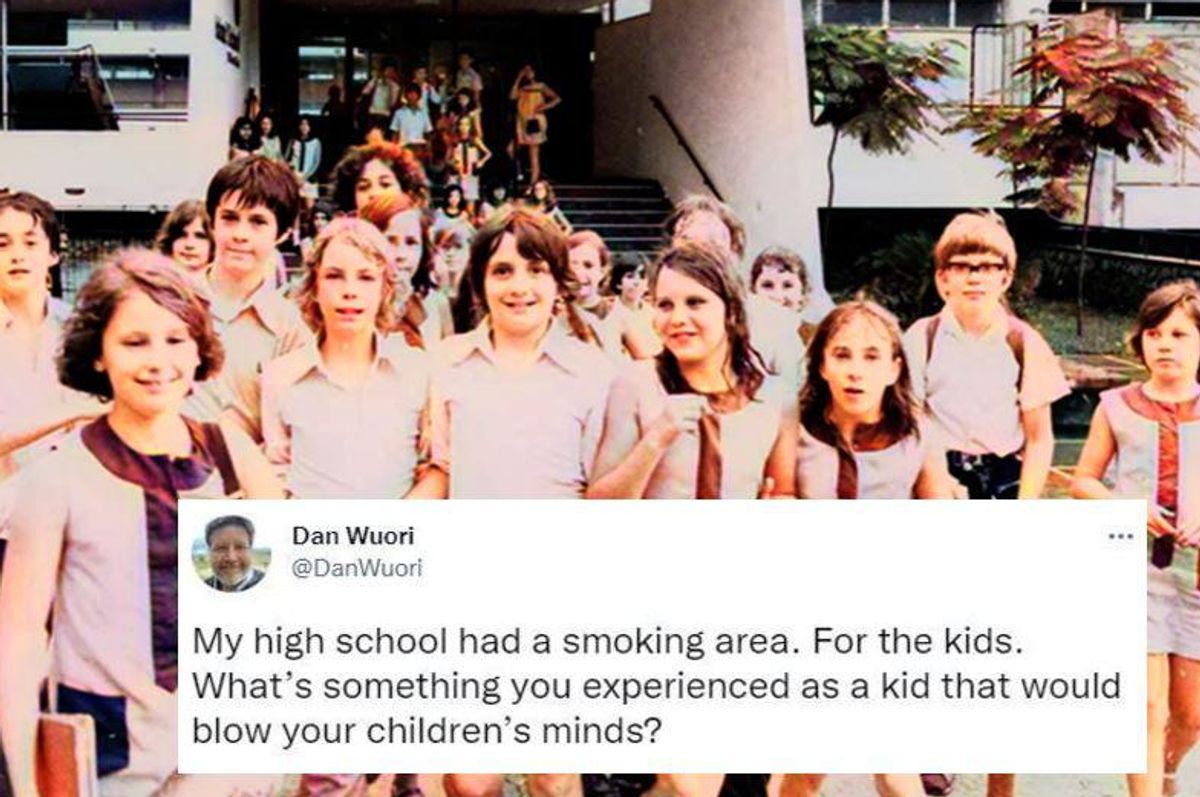 Parents, do you think your child would be able to survive if they were transported back to the ’70s or ’80s? Could they live at a time before the digital revolution put a huge chunk of our lives online?

These days, everyone has a phone in their pocket, but before then, if you were in public and needed to call someone, you used a pay phone. Can you remember the last time you stuck 50 cents into one and grabbed the grubby handset?

According to the U.S. Federal Communications Commission, roughly 100,000 pay phones remain in the U.S., down from 2 million in 1999.

Do you think a 10-year-old kid would have any idea how to use a payphone in 2022? Would they be able to use a Thomas Guide map to find out how to get somewhere? If they stepped into a time warp and wound up in 1975, could they throw a Led Zeppelin album on the record player at a party?

Another big difference between now and life in the ’70s and ’80s has been public attitudes toward smoking cigarettes. In 1965, 42.4% of Americans smoked and now, it’s just 12.5%. This sea change in public opinion about smoking means there are fewer places where smoking is deemed acceptable.

But in the early ’80s, you could smoke on a bus, on a plane, in a movie theater, in restaurants, in the classroom and even in hospitals. How would a child of today react if their third grade teacher lit up a heater in the middle of math class?

Dan Wuori, senior director of early learning at the Hunt Institute, tweeted that his high school had a smoking area “for the kids.” He then asked his followers to share “something you experienced as a kid that would blow your children’s minds.”

A lot of folks responded with stories of how ubiquitous smoking was when they were in school. While others explained that life was perilous for a kid, whether it was the school playground equipment or questionable car seats.

Here are a few responses that’ll show today’s kids just how crazy life used to be in the ’70s and ’80s.

First of all, let’s talk about smoking.

u201cMy high school had a smoking area. For the kids. Whatu2019s something you experienced as a kid that would blow your childrenu2019s minds?u201d

Mine too. Up until my senior year. Also, my biology teacher smoked in the classroom. We used to tell time by how many cigarettes she had in her ashtray.

We made clay ashtrays as gifts for Mother’s Day…whether moms smoked or not!😂

We had a smoking room IN our high school. We also had cadet training and a shooting range in the basement of the school. We had Latin as an option and could drop math in Grade 10! Also in the « good old days »: we could smoke in class at Carleton, at the movies and on airplanes.

I grew up in a rural area. It wasn’t unheard of for guys to have a shotgun in a gun rack in their trucks, parked at school. Could also carry large knives and openly chew tobacco in school. They don’t allow any of this now, which is good.

Want to call someone? Need to get picked up from baseball practice? You can’t text mom or dad, you’ll have to grab a quarter and use a pay phone.

My high school had pay phones.

Using a pay phone that was outside the school gym to call my parents for a ride home from practice. But calling collect and saying “pick me up” and hanging up before getting charged. 😂

People had little regard for their kids’ safety or health.

I slept in the back window of the car when the family went on vacation!

We stared Death in the eye every day. pic.twitter.com/zWHh5bvUym

Car seats that just hung over the front seat. Hang on, kid! pic.twitter.com/2DdCoXhqmf

I have heard stories of country schools in the 50s (which are now urban schools) having boys swim naked in PE (that’s just how they did it in the country). Van Horn High School in Independence MO.

I use this example any time people lament the changes from the “good ole days”.

Also, in Driver’s Ed. We warched this film, “Blood on the Highways.” 45 minutes of unedited film of fatal highway accidents. This was mostly before mandatory seatbelts. 45 years later, I remember the rear view mirror that split a guy’s skull, imbedded in his brain.

Large fry as your entire meal in middle school. It was the most popular item too. Literally as it sounds. Just a large basket of French fries for lunch.

Truck with gun racks/rifles in the HS parking lot.
(DFW too not a small town) pic.twitter.com/RnWiKQwKB7

You could buy a soda in school.

Vending machine in the cafeteria to buy sodaaaaa 🥤

Things were a lot different before the internet.

If you wanted to listen to a particular song, you had to call the radio station (and hope you got through) and ask them to play it for you.

I wrote letters regularly to a penpal from a different country and then saved them all in a shoebox. Then in college I flew to “meet” her for the 1st time to participate in her wedding ❤️ But now we connect on FB 😂

A lot of people bemoan the fact that the children of today aren’t as tough as they were a few decades back. But that’s probably because the parents of today are better attuned to their kids’ needs so they don’t have to cheat death to make it through the day.

But just imagine how easy parenting would be if all you had to do was throw your kids a bag of Doritos and a Coke for lunch and you never worried about strapping them into a car seat?