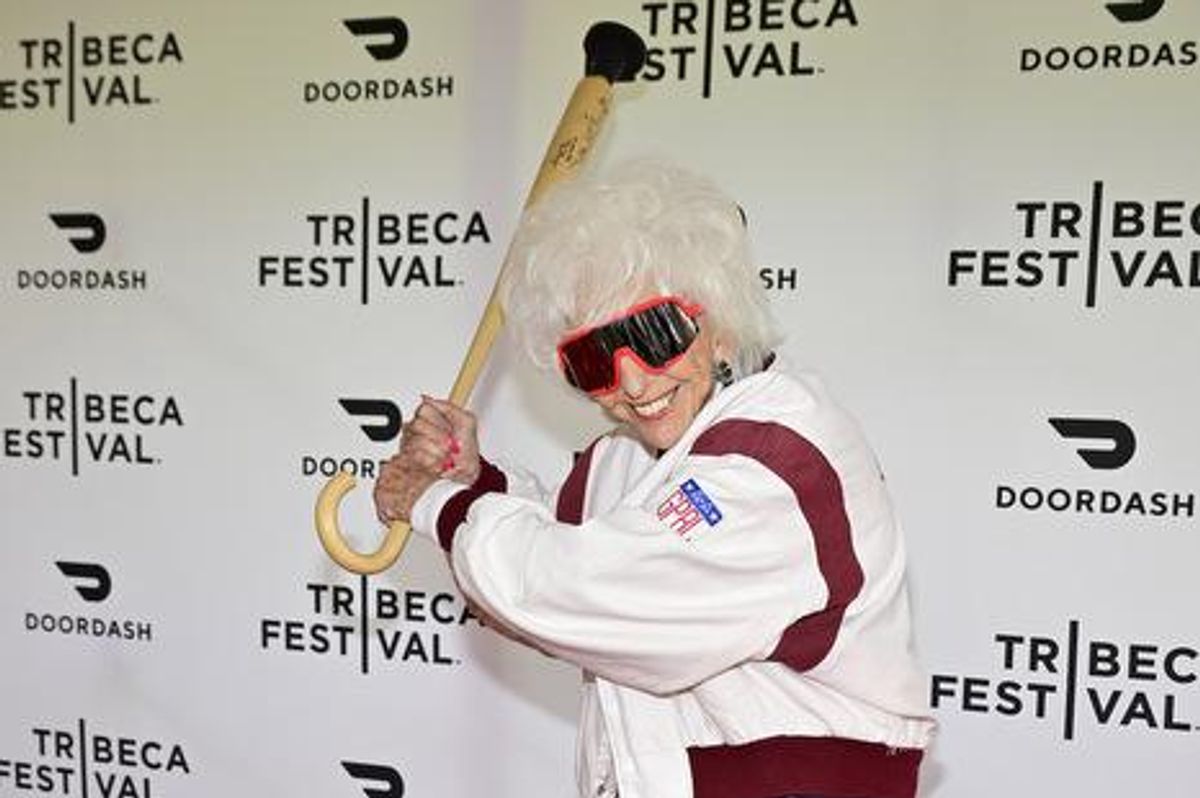 Thirty years ago, one of the greatest sports movies of all time (IMO), “A League of Their Own,” was released. It’s hard to believe it’s been 30 years since many of us first learned about the All-American Girls Baseball League. What people may not realize is that the story isn’t over. A new series, created by Abbi Jacobson, is coming to Amazon Prime Video in August. The promo tour has already begun and it looks like the creators of the show are featuring women who were actually a part of the AAGPBL.

One of those women is Maybelle “All the way Mae” Blair, who played for the Peoria Redwings. During a recent panel at the Tribeca Film Festival, Blair, 95, decided that was as good a time as any to come out.

“I hid for 75, 85 years and this is actually basically the first time I’ve ever come out,” Blair said to rousing chorus of cheers.

The show’s official Instagram account shared the video of Blair with the caption: “For the majority of her life, sports legend 95-year old AAGPBL player, Maybelle Blair felt like she had to hide her authentic self. Today she came out publicly for the first time. We couldn’t be happier for her, and continue to push for love, acceptance, and education on and off the field.”

A post shared by A League of Their Own (@leagueonprime)

“I think it’s a great opportunity for these young girl ball players to come [to] realize that they’re not alone, and you don’t have to hide,” Blair said, speaking about younger generations of female athletes.

Sometimes it’s easy to forget that there was a time where being “out” was actually dangerous, especially for women. In the 1940s, women were already discriminated against. If you were out as a lesbian, your options for work and survival were incredibly limited. While there is sometimes an assumption that women in sports are queer, back when Blair was playing baseball, she couldn’t be open about it. According to a league history from the AAGPBL website, “femininity was a high priority.” Yes, femme lesbians existed, but it wasn’t something they could be open about. The women couldn’t even go out without a chaperone!

Queerness is baked into the fabric of the reboot, which Blair was hired as a consultant for. Just because it wasn’t talked about in the past doesn’t mean those women didn’t exist, as Blair obviously shows.

“I thought I was the only one in the world,” Blair said during the panel, as reported by IndieWire. She added that the community of the AAGPBL allowed her a safe place.

IndieWire also reported that Jamie Babbit, director of the show’s pilot episode, spent time at the AAGPBL convention in Cooperstown, where the National Baseball Hall of Fame is, after being hired. “There was a queerness in the air and just really joyful, amazing women who I just wanted to hang out with. I really wanted to bring that joy to the show,” she said.

In addition to coming out and being a consultant for the show, Blair has another mission: getting the International Women’s Baseball Center museum built. The Los Angeles Times reported that there is land available in Rockford, Illinois, across from where the Rockford Peaches used to play baseball. But they need funds. Blair, a tireless advocate for baseball and softball for women, is determined to help make it happen.

“I hope to God that I can get the shovel going into the ground before I’m on the other side of the grass because I’ve got to live long enough to see this happen,” she said.

Maybelle Blair is truly an inspiration, and I’m so glad we get to share her story.