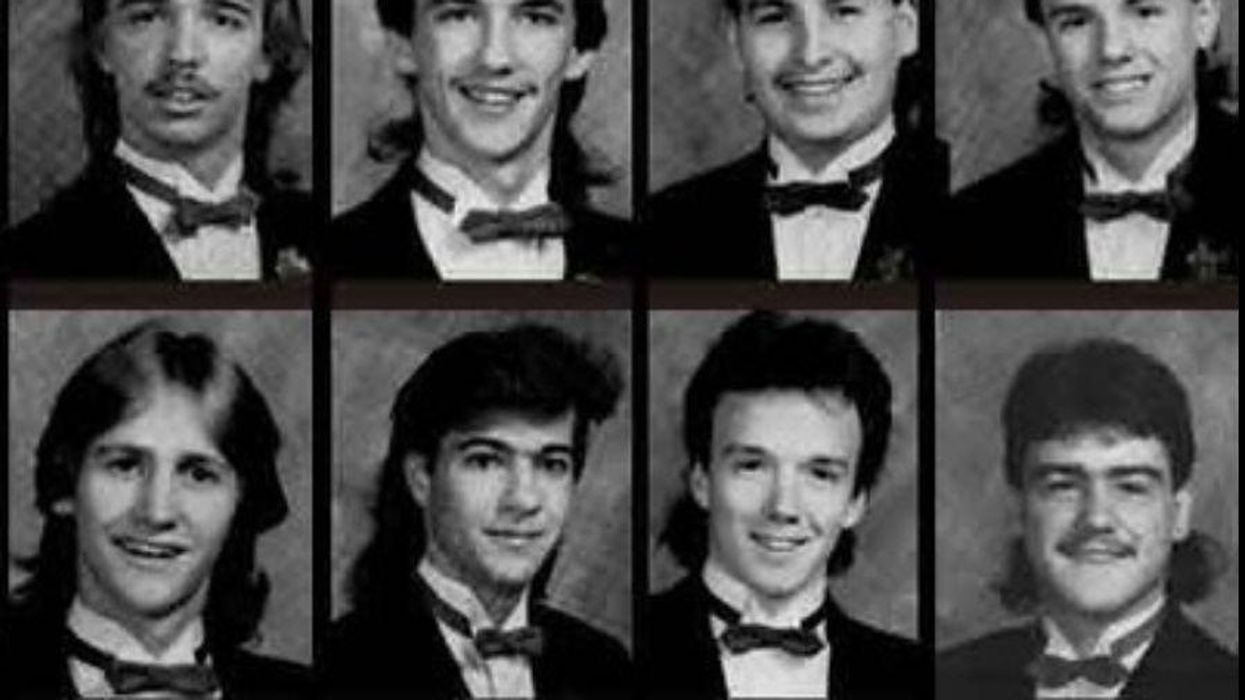 Those of us who lived through the ’80s remember well the heyday of the mullet, that business-in-the-front, party-in-the-back hairstyle many feel should’ve been left in the annals of history under category of “humanity’s bad decisions.”

However, the mullet has apparently been making a comeback in recent years. For some, it’s a kitschy statement, for others it’s a morbid curiosity and for some … well, for some it’s a lifestyle. #mulletlife

In fact, since 2020, the USA Mullet Championships has crowned winners for the best mullets, offering cash prizes and a whole host of bragging rights to the child, teen and adult who sport the ultimate mullet. Say it with me now: “Yeee hawww!”

The child and teen category winners have already been named for the 2022 contest. Prepare to be amazed, impressed and maybe a little mortified.

The top spot in the kid’s division went to Emmitt Bailey of Menomonie, Wisconsin, with his spikey-curly combo mullet. In second place, Epic Orta—yep, his name is Epic—came rolling in from La Joya, Texas, with some tousled, epic ombre action. And finally, William Dale Ramsey of Pataskala, Ohio, came in third. (If that kid doesn’t go by “Billy,” then nothing in this world makes sense anymore.) 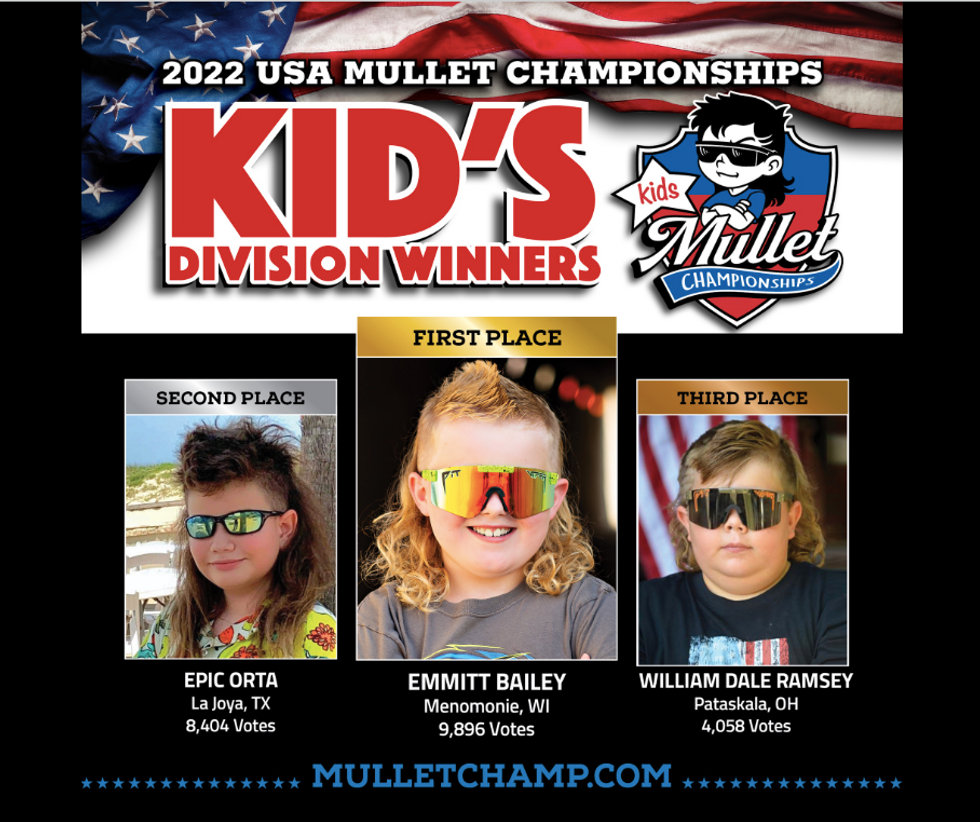 It’s the wraparound sunglasses that really bring out the mulletness on all three, isn’t it?

Moving on to the teen division, another Wisconsinite took the top prize. Cayden Kershaw of Wausau barely eked out a win with less than 20 votes separating him from second place. Gotta say, that big feathered action up top perfectly harkens back to the true ’80s mullet. Second place winner Fisher Monds came in a solid, though, representing Florida with those gorgeous sun-tipped curls. And Max Weihbrecht, yet another Wisconsinite (what’s with the mullets, Wisconsin?), came in third.

(Personally, I think it was the aviators that lost it for him. Get that boy a pair of wraparounds—he’s got a bright mullet future ahead of him.) 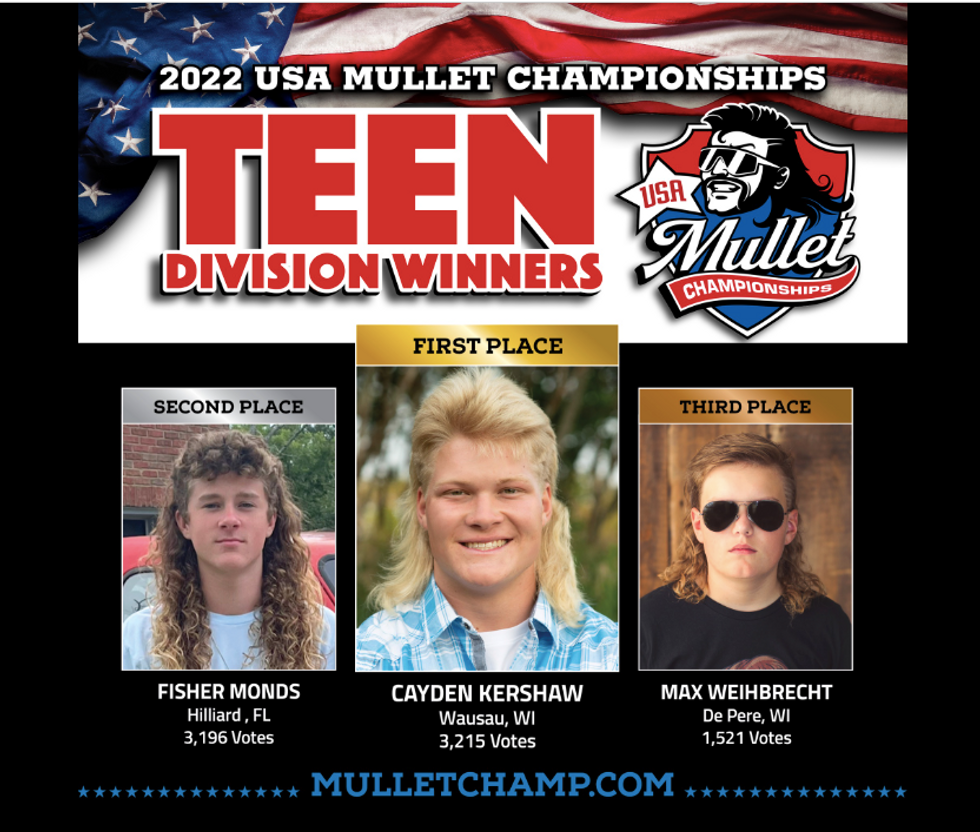 To be fair, the mullet predates the 1980s, and not just a little bit, according to the Mullet Championships website:

“According to some historians, the mullet has been around since at least Ancient Greece, where the style was as much for function as it was for fashion. Cropped hair around the face with longer locks in the back allowed for both visibility and a protective layer of hair for your neck. Homer even described a haircut that sounds eerily familiar in The Iliad: “their forelocks cropped, hair grown long at the backs.” The Greeks weren’t the only ones sporting the mullet, though. There is evidence that Neanderthals and our oldest ancestors would wear this ‘do,’ as well.”

Another fun mullet fact: The name of the hairstyle was actually coined by The Beastie Boys in the 1994 song “Mullet Head.” The term “mullethead,” meaning “a stupid person,” has been around much longer, but the Beastie Boys described the mullet hairstyle in their song: “Number one on the side and don’t touch the back, number six on the top and don’t cut it wack, Jack.” (“Number one” and “number six” referring to the clipper guard sizes on a set of hair shears.) The name stuck, and now here we are nearly three decades later holding national mullet competitions.

The USA Mullet Championships folks actually held a live mullet competition in May 2022 and the video from it is a must-see for reasons I can’t really explain.

The open division is accepting registrations until August 31. We shall be waiting with bated breath to see which adult takes first prize in the USA Mullet Championships.