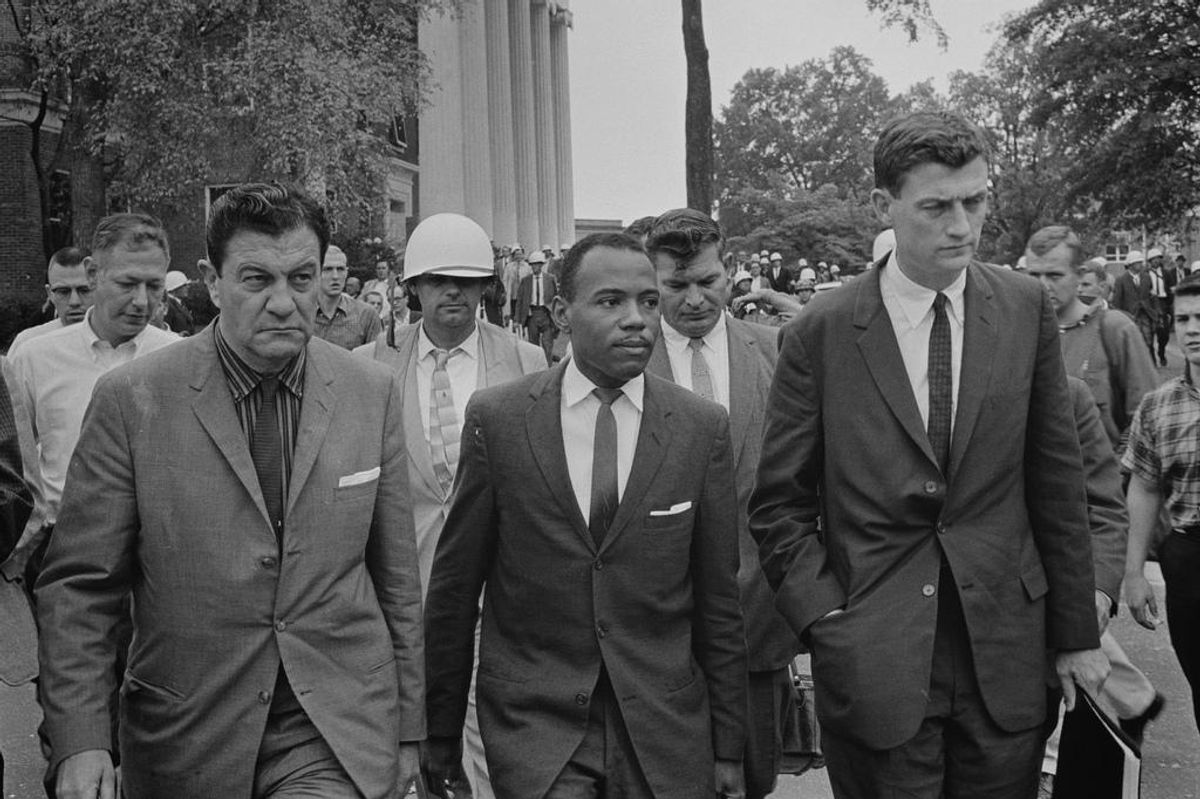 In our history classes, pretty much every American learns about segregation in the American South and the civil rights movement it spawned, but much of that education is lacking in detail. When we teach the history of racial segregation broadly and dispassionately, as if it were merely a thing that existed and then ended, we underplay the unbridled, unapologetic white supremacy that lay at the heart of that history. It’s uncomfortable to look our nation’s ongoing relationship with racism square in the face, but we can’t repair wounds we don’t acknowledge.

To understand the absolutely bonkers levels of racism that enabled and perpetuated racial segregation, it’s helpful to look at the details of specific historical events. If we dive into individual stories, such as the experiences of Ruby Bridges, Claudette Colvin, Elizabeth Eckford, Medgar Evers and many others, the truth of how racism has repeatedly cut America to its core becomes clear.

On September 30, 1962, a Black Air Force veteran named James Meredith did something seemingly unremarkable—he showed up to register for classes and move into his dorm at the University of Mississippi, where he had been admitted three weeks prior.

It actually was remarkable, though. No Black person had ever attended “Ole Miss” before and Meredith’s admission was viewed as a travesty by the white supremacists in power. State officials, including Mississippi Gov. Ross Barnett, who declared “I’m a Mississippi segregationist and I am proud of it,” did everything they could to prevent it. The court battle began in 1961 and went all the way to the U.S. Supreme Court before Meredith’s admission to the school was finalized on September 10, 1962.

Meredith showed up on campus on September 30 escorted by federal marshals for his own safety. Sadly, that wasn’t enough to quell the racist rage that necessitated the escort in the first place. Hundreds of angry white students and locals marched toward the building where Meredith was to register.

Federal marshals deployed tear gas as the mob erupted into violence, throwing rocks and bottles before bringing out the guns as night fell. As the mob grew in size, so did the chaos. Reporters covering the riot were beaten and their equipment was burned. A French journalist was shot and killed, and a bystander who had come to campus to see what was happening was murdered as well.

The federal government sent thousands of army soldiers to campus in the middle of the night to quash the rioting, which went on until the early hours of the morning. Ultimately, 30,000 troops were called upon to quell the violence that left two dead and at least 300 wounded.

United Press International reported the day after the riot: “More violence was unleashed in less than four hours than in the six-month period when U.S. paratroopers forced integration of Central High School in Little Rock five years ago.”

To make matters worse, the racist mob immediately tried to blame Meredith for the violence. As three deputy marshals and a representative from the U.S. Department of Education walked Meredith to his first history class the following day, white protesters shouted the N-word at him repeatedly and asked him, “Was it worth two deaths?”

Imagine the rage and frustration Meredith must have felt at such a series of injustices. One of the most striking things about these kinds of stories is the contrast between the rage being acted out by white supremacists (who had no legitimate reason to be violently angry) and the rage Black people were 100% justified in feeling but weren’t allowed to express.

The fact that these people were willing to burn down the school that they supposedly cared so much about, simply because one Black person dared to set foot on campus as an admitted student, is a testament to how deeply white supremacy can be ingrained. We’ve seen such insanely illogical events play out over and over again in our history. While we’ve made many forward strides in the past 60 years, the racist beliefs that led to those events are still around and far too easy to fuel and inflame.

Yet, 1962 simply wasn’t that long ago. James Meredith is still alive, and chances are good that some of the students who lost their minds over his admission to their university are still kicking, too. Have they changed? Have they done the hard work of rooting out that racism from their minds and hearts? Did they teach their own children differently? Do their grandchildren know the part they played in our collective history?

The more acquainted we are with our past, the more equipped we are to create a better future. As hard as it is to read these stories, they are vital for us to learn about so that we don’t repeat the same heinous history over and over again.