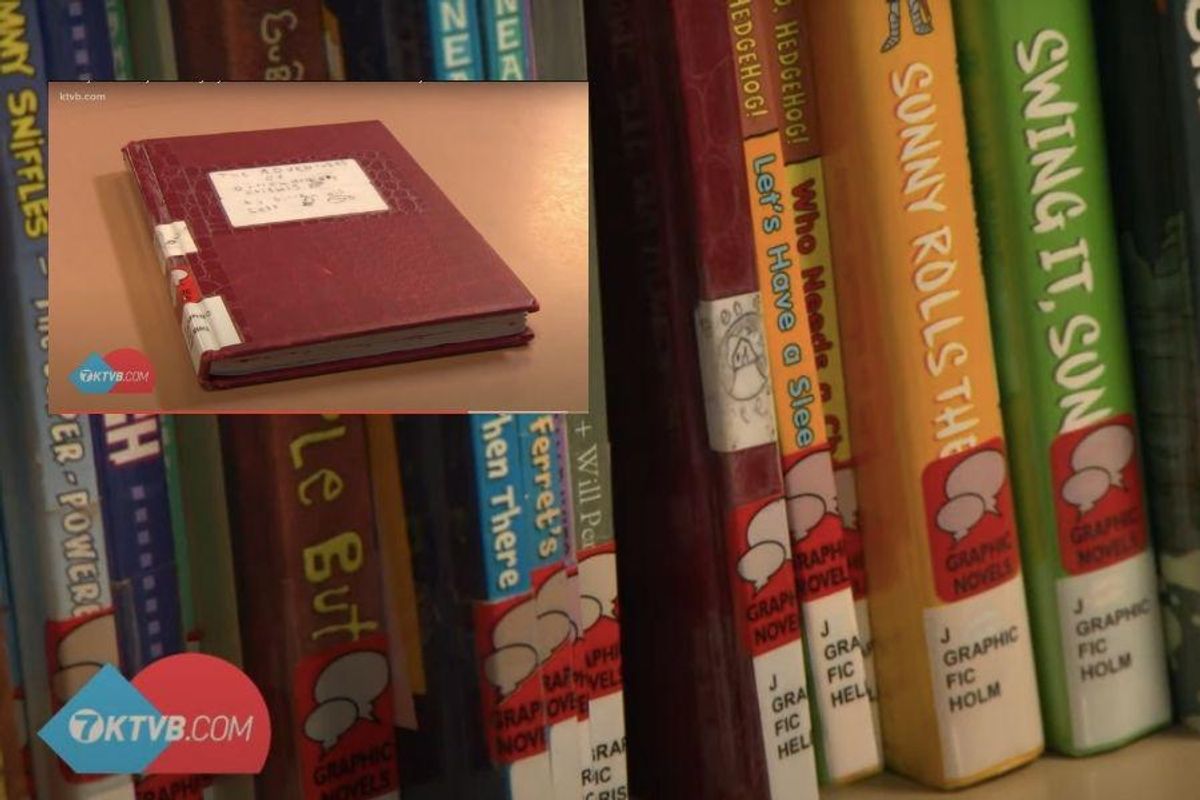 This article originally appeared on 02.02.22

Writing a book is no easy task, even for adult professional writers. Many would-be authors dream of a day when their work can be found on library shelves, unsure if it will ever come.

But for 8-year-old Dillon Helbig, that day has already arrived—in truly unconventional fashion—thanks to his own determination to make it happen.

Dillon wrote his 81-page graphic novel, “The Adventures of Dillon Helbig’s Crismis” (written by “Dillon His Self”) in a hardcover journal with colored pencils over the course of a few days. He even put a label on the back of the book that reads “Made in Idho” [sic] and put an illustrated spine label on it as well. Then, without telling anyone, he brought it to his local library in Boise, Idaho, and slipped it in among the books in the children’s section.

The library Facebook page shared that it had officially added the book to the collection at the branch, writing, “Imagine our surprise yesterday when Dillon’s mom called to tell us that her son had authored an entire book, shelved it at the Lake Hazel Branch, then announced to his family later that he had written a book and it could be checked out at the library.”

The library also announced that Dillon’s book had won the first-ever Whoodini Award for Best Young Novelist—an award created in his honor.

Dillon told local news station KTVB that the book features him, his mom, Santa, a bomb, a portal and a giant carnivorous turkey. Because of course.

“I’ve been wanting to put a book in the library since I was five,” Dillon told the station. Nearly half his life, in other words.

Dillon said there were a lot of librarians he had to sneak past with his book to surreptitiously put it on the shelf, but he did it.

“I’ll always be sneaky, like how I get chocolate,” he explained. Classic.

The adults on every front handled this kid’s creativity and determination the best possible way. His mom called the library to let them know the book was there so it wouldn’t get lost or taken. And rather than just returning the book, the librarians actually put it into circulation.

“His parents were worried we would find his book and we would get rid of it,” Lake Hazel Branch Library manager Alex Hartman told KTVB. “Which was an unfounded fear because if there’s ever a place a book would be safe, it would be here.”

“It deserves a spot on our library shelves,” said Hartman. “It’s a good story.”

At the time of this local news report, the book had a handful of people in line to check it out. But The New York Times reports that as of the end of January, the waiting list has grown to a whopping 56 people. If each person kept the book for the maximum four-week checkout period it would take four years to get to the people at the bottom of the list.

The experience has made Dillon decide to become an author, his mom said, and he even has some career goals laid out.

“I’m going to stop writing when I’m 40,” Dillon said. After that, he will switch to game creation. In the meantime, he has a sequel to his first novel in the works.

“My next book is going to be called ‘The Jacket-Eating Closet,’” he said, “based on actual events.”

Amazing. Kudos to Dillon for following his dream and making it happen, kudos to his mom for encouraging him and kudos to the librarians who saw an opportunity to support a child’s creativity and ran with it.