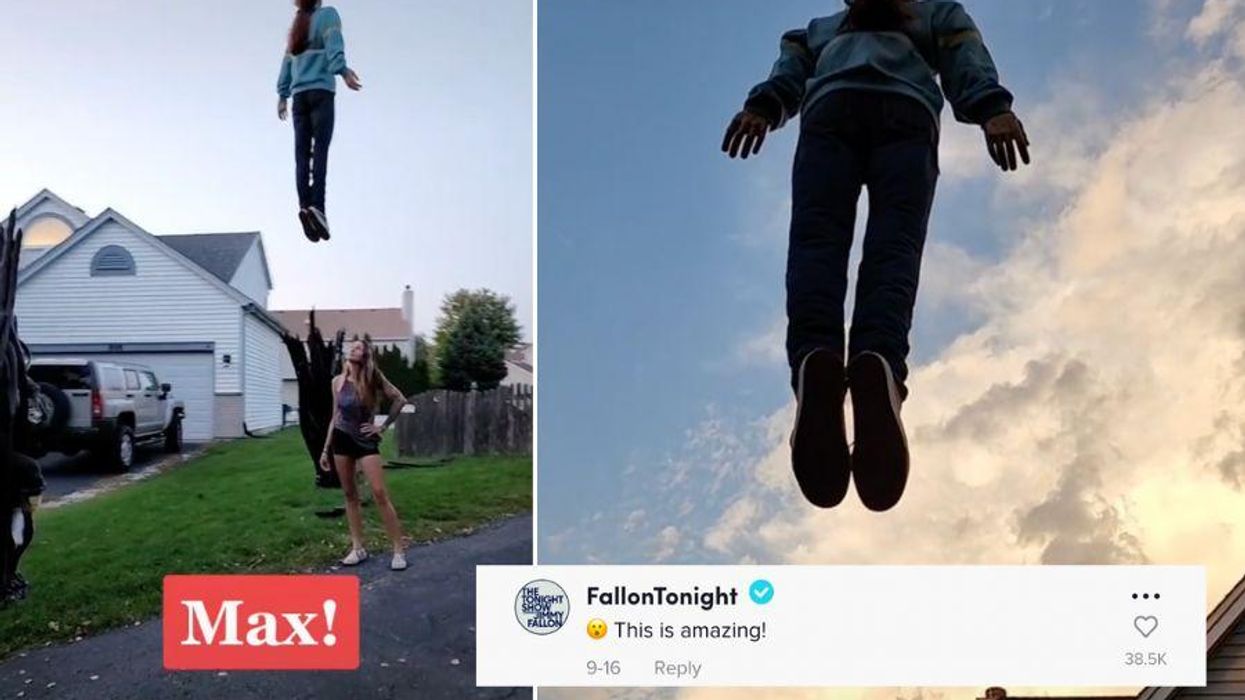 Yep, we already have a winner for “Coolest Halloween Decor” this year, and this one’s a doozy.

Dave and Aubrey, a “horror prop making family” in Chicago, have left horror fans stunned with their hyperrealistic recreation of arguably THE most iconic scene from season 4 of Netflix’s “Stranger Things.”

If you haven’t seen it (um, where have you been?), the season’s main monster antagonist, Vecna, traps Max and other characters in the alternate dimension of the Upside Down, and just before they meet their doom, these characters begin to float midair in the human world.

Luckily (spoiler alert) our heroes are able to figure out how to save Max before it’s too late, by playing “Running Up That Hill” by Kate Bush—her favorite song.

Dave and Aubrey somehow managed to make their own life-size replica of Sadie Sink’s character that, no joke, looks like it’s levitating using nothing but some kind of dark magic.

More than 14 million people have been mesmerized on TikTok, including Jimmy Fallon, who called the trick “amazing.”

Dave and Aubrey mentioned in the comments that nothing in the video was edited, which left folks baffled as to how the heck this image was made possible … especially without a tree or a telephone wire to attach a wire to.

“There’s clearly a string connected to a satellite in outer space. How don’t y’all know this?! 🙄🙄,” one person joked.

Though he wouldn’t disclose his secret, Dave did tell WRAL News that it’s “not drones, helium or balloons.” He also shared that he and his wife “go big” every year for Halloween. This year, in an attempt to outdo themselves, they began their project on Aug 1.

Unsurprisingly, a floating Max isn’t the only thing that Dave and Aubrey have up their sleeves this year. It’s actually part of a massive, all encompassing “Stranger Things” display, which includes:

A glowing, smoking Upside Down spire…

“Excuse me, I thought my house was gonna be the spooky one on the block this year w/ my dollar tree props, maybe I’ll just be the Christmas one. Jk lol,” one person quipped.

Unfortunately, Chrissy (played by Grace Van Dien) wasn’t as lucky as Max. But it makes for a rad haunted house!

These were made with spray-painted aluminum foil.

And a creepy cuckoo clock…

Yet another well-known image from season 4.

“There’s so many people out there who are fanatics like we are, so we wanted to make something that was the most iconic scene from the show; something maybe no one else could try and do,” Dave told WRAL News. Mission successful, Dave. Well done.

For folks in the Chicagoland area, this amazing “Stranger Things” display will be part of a haunted tour for Chicago Haunt Builders. For everyone else: Have no fear, TikTok provides.

Inspired to create your own haunted masterpiece? We’ve rounded up some easy, unique decor ideas to make your house effortlessly spooky this year.