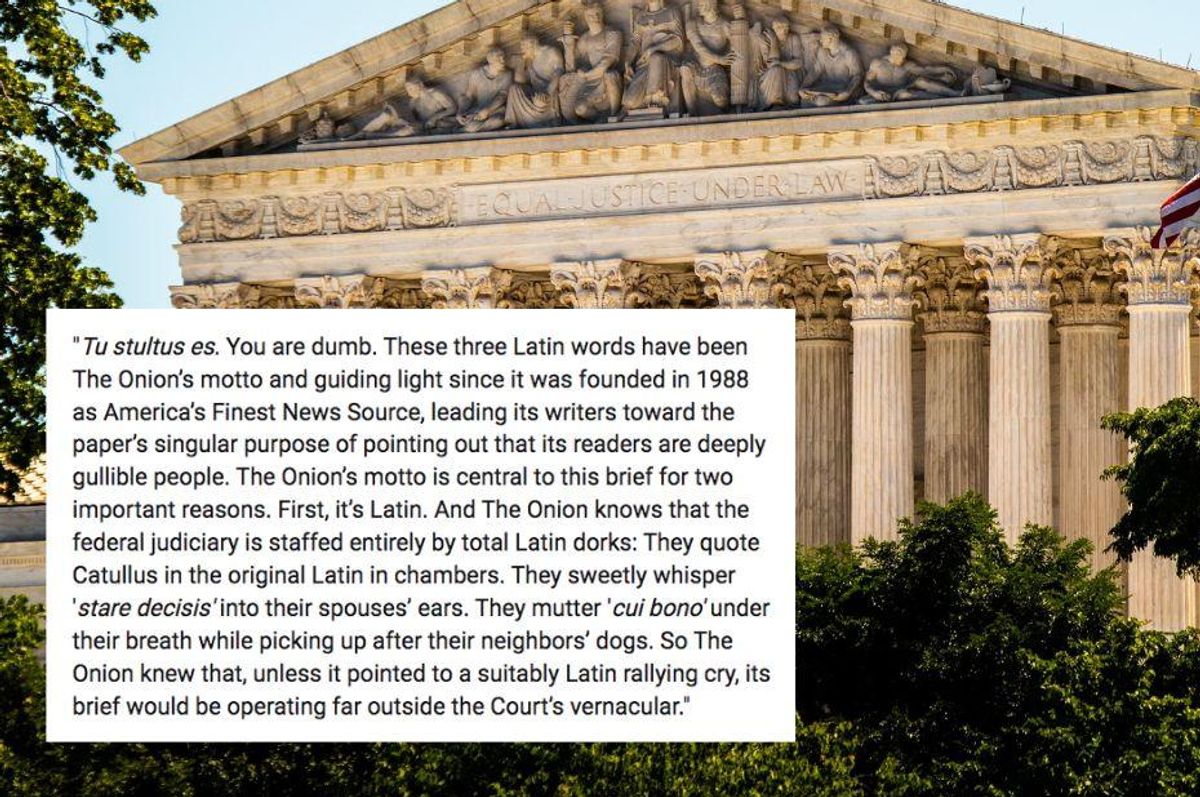 Political satire and parody have been around for at least 2,400 years, as ancient Greek playwright Aristophanes satirized the way Athenian leaders conducted the Peloponnesian War and parodied the dramatic styles of his contemporaries, Aeschylus and Euripides.

Satire and parody are used to poke fun and highlight issues, using mimicry and sarcasm to create comedic biting commentary. No modern outlet has been more prolific on this front than The Onion, and the popular satirical news site is defending parody as a vital free speech issue in a legal filing with the U.S. Supreme Court.

The filing is, as one might expect from The Onion, as brilliantly hilarious as it is serious, using the same satirical style it’s defending in the crafting of the brief itself.

The Onion filed its amicus brief in support of Anthony Novak, a man who was arrested for and prosecuted for parodying the Parma, Ohio, police department on Facebook. Citing a law against disrupting police operations, the police searched Novak’s apartment, seized his electronics and put him in jail, where he spent four days before making bail. After a jury acquitted him of all criminal charges, he subsequently filed a civil lawsuit against the police for violating his First and Fourth Amendment rights. However, a federal appeals court threw out the lawsuit, ruling that the officers had “qualified immunity,” which protects government officials from being sued for unconstitutional infringements.

The Onion is petitioning for a writ of certiorari, asking the Supreme Court to review the Sixth Circuit Court of Appeals’ decision to toss out Novak’s civil rights suit. As NPR points out, one primary question in this case is whether people reasonably believed Novak’s Facebook page, which used the department’s real name and photo but had a satirical slogan (“We no crime.”), to be the department’s real page.

The Onion argues that such ambiguity and potential confusion is exactly the point of parody. But the way the argument is made—using satire and parody to defend satire and parody—is making headlines.

The 23-page amicus brief can be read in full here, but let’s look at some of the highlights:

First, the description of The Onion itself:

“The Onion is the world’s leading news publication, offering highly acclaimed, universally revered coverage of breaking national, international, and local news events. Rising from its humble beginnings as a print newspaper in 1756, The Onion now enjoys a daily readership of 4.3 trillion and has grown into the single most powerful and influential organization in human history.

“In addition to maintaining a towering standard of excellence to which the rest of the industry aspires, The Onion supports more than 350,000 full- and parttime journalism jobs in its numerous news bureaus and manual labor camps stationed around the world, and members of its editorial board have served with distinction in an advisory capacity for such nations as China, Syria, Somalia, and the former Soviet Union. On top of its journalistic pursuits, The Onion also owns and operates the majority of the world’s transoceanic shipping lanes, stands on the nation’s leading edge on matters of deforestation and strip mining, and proudly conducts tests on millions of animals daily.”

It’s clear to a reasonable mind that they’re not being serious here. And yet, this description is being filed in a real Supreme Court filing, setting the stage for the entire argument of how parody works.

“Put simply, for parody to work, it has to plausibly mimic the original,” the brief states. “The Sixth Circuit’s decision in this case would condition the First Amendment’s protection for parody upon a requirement that parodists explicitly say, up-front, that their work is nothing more than an elaborate fiction. But that would strip parody of the very thing that makes it function. The Onion cannot stand idly by in the face of a ruling that threatens to disembowel a form of rhetoric that has existed for millennia, that is particularly potent in the realm of political debate, and that, purely incidentally, forms the basis of The Onion’s writers’ paychecks.”

The writer of the brief clearly wasn’t going to let the opportunity to demonstrate the comedic nature of satire to pass simply because this was an actual legal document being filed before the highest court in the land, nor was he going to spare the judiciary from being the object of said comedy.

It took some gumption to write this paragraph, but oh gracious is it perfection. While arguing that parody functions by tricking people into thinking it’s real, the brief states:

“Tu stultus es. You are dumb. These three Latin words have been The Onion’s motto and guiding light since it was founded in 1988 as America’s Finest News Source, leading its writers toward the paper’s singular purpose of pointing out that its readers are deeply gullible people. The Onion’s motto is central to this brief for two important reasons. First, it’s Latin. And The Onion knows that the federal judiciary is staffed entirely by total Latin dorks: They quote Catullus in the original Latin in chambers. They sweetly whisper ‘stare decisis’ into their spouses’ ears. They mutter ‘cui bono’ under their breath while picking up after their neighbors’ dogs. So The Onion knew that, unless it pointed to a suitably Latin rallying cry, its brief would be operating far outside the Court’s vernacular.”

Just jaw-droppingly irreverent, and yet immediately following is a totally cogent and reasoned argument about the nature of parody, complete with citations and footnotes:

“The second reason—perhaps mildly more important—is that the phrase ‘you are dumb’ captures the very heart of parody: tricking readers into believing that they’re seeing a serious rendering of some specific form—a pop song lyric, a newspaper article, a police beat—and then allowing them to laugh at their own gullibility when they realize that they’ve fallen victim to one of the oldest tricks in the history of rhetoric. See San Francisco Bay Guardian, Inc. v. Super. Ct., 21 Cal. Rptr. 2d 464, 466 (Ct. App. 1993) (‘[T]he very nature of parody . . . is to catch the reader off guard at first glance, after which the ‘victim’ recognizes that the joke is on him to the extent that it caught him unaware.’).

“It really is an old trick. The word ‘parody’ stretches back to the Hellenic world. It originates in the prefix para, meaning an alteration, and the suffix ode, referring to the poetry form known as an ode.3 One of its earliest practitioners was the first-century B.C. poet Horace, whose Satires would replicate the exact form known as an ode—mimicking its meter, its subject matter, even its self-serious tone—but tweaking it ever so slightly so that the form was able to mock its own idiocies.”

The brief is a brilliant defense of parody wrapped up in perfect parodic packaging, which is even pointed out in the arguments to drive home the point, as on page 15:

“This is the fifteenth page of a convoluted legal filing intended to deconstruct the societal implications of parody, so the reader’s attention is almost certainly wandering. That’s understandable. So here is a paragraph of gripping legal analysis to ensure that every jurist who reads this brief is appropriately impressed by the logic of its argument and the lucidity of its prose: Bona vacantia. De bonis asportatis. Writ of certiorari. De minimis. Jus accrescendi. Forum non conveniens. Corpus juris. Ad hominem tu quoque. Post hoc ergo propter hoc. Quod est demonstrandum. Actus reus. Scandalum magnatum. Pactum reservati dominii.

“See what happened? This brief itself went from a discussion of parody’s function—and the quite serious historical and legal arguments in favor of strong protections for parodic speech—to a curveball mocking the way legalese can be both impenetrably boring and belie the hollowness of a legal position. That’s the setup and punchline idea again. It would not have worked quite as well if this brief had said the following: ‘Hello there, reader, we are about to write an amicus brief about the value of parody. Buckle up, because we’re going to be doing some fairly outré things, including commenting on this text’s form itself!’ Taking the latter route would have spoiled the joke and come off as more than a bit stodgy. But more importantly, it would have disarmed the power that comes with a form devouring itself. For millennia, this has been the rhythm of parody: The author convinces the readers that they’re reading the real thing, then pulls the rug out from under them with the joke. The heart of this form lies in that give and take between the serious setup and the ridiculous punchline.”

The Onion has outdone itself many times, but this amicus brief may be its best work yet right up to the end.

“The Onion intends to continue its socially valuable role bringing the disinfectant of sunlight into the halls of power…,” the argument section concludes. “And it would vastly prefer that sunlight not to be measured out to its writers in 15- minute increments in an exercise yard.”

Definitely give the full brief a read. You’ll certainly never read another Supreme Court filing like it.