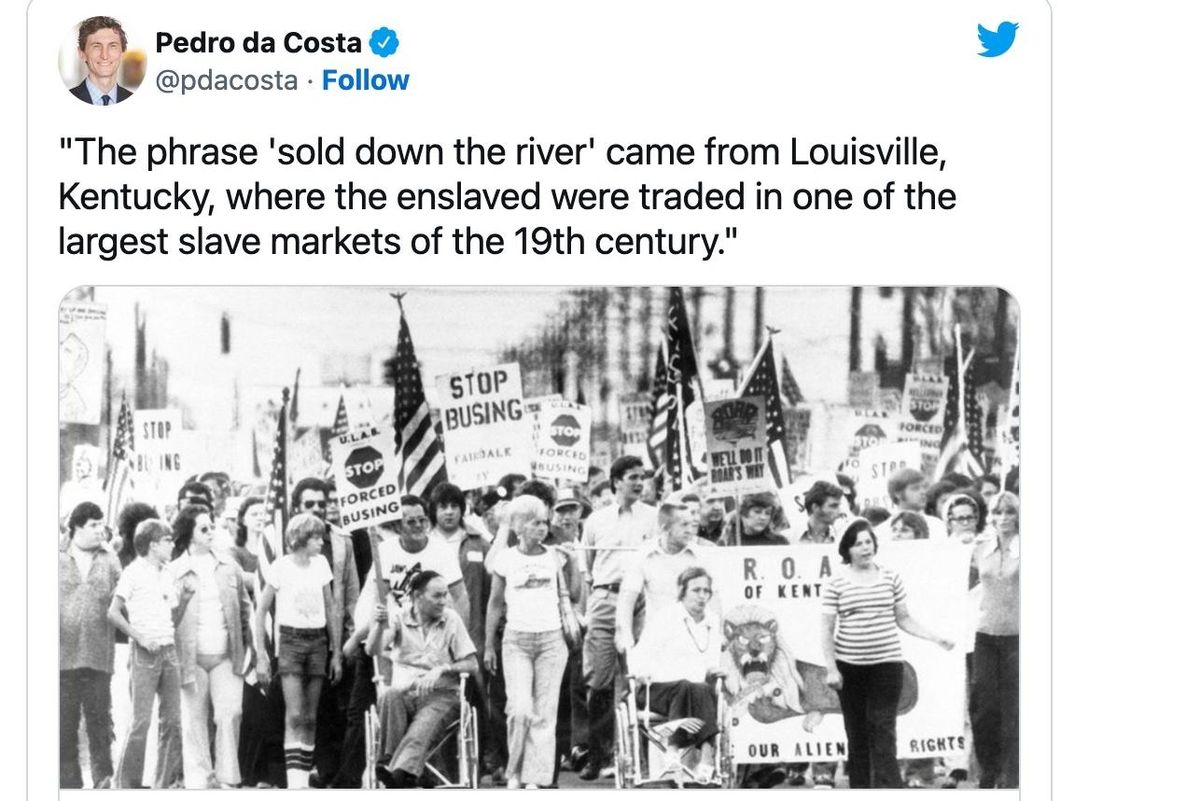 This article originally appeared on 02.04.19

As much as we’d like to pretend every phrase we utter is a lone star suspended in the space of our own genius, all language has a history. Unfortunately, given humanity’s aptitude for treating each other like shit, etymology is fraught with reminders of our very racist world.

Since I have faith that most of you reading want to navigate the world with intelligence and empathy, I figured it’d be useful to share some of the everyday phrases rooted in racist etymology.

Knowledge is power, and the way we use and contextualize our words can make a huge difference in the atmospheres we create.

According to Meriam-Webster’s dictionary definition, a thug is “a violent criminal.” Obviously, this definition leaves the word open to define people of all ethnicities.

However, given the frequent ways this word has been used to describe Black Lives Matter protesters, the 17-year-old murder victim Trayvon Martin, and sadly, almost every black victim of police brutality — there is an undeniable racial charge to the word.

When you consider the people who are called thugs — groups of black protesters, victims of racist violence, teenagers minding their own business, and flip the racial element, you’d be hard-pressed to find examples of white people being called thugs in earnest by the media (or really by anyone).

Several prominent activists and black writers have written about the phenomenon of thug replacing the n-word in modern culture. In a popular press conference back in 2014, the Seattle Seahawks player Richard Sherman explained his feelings about the word.

“The reason it bothers me is because it seems like it’s an accepted way of calling somebody the N-word now. It’s like everybody else said the N-word and then they say ‘thug’ and that’s fine. It kind of takes me aback and it’s kind of disappointing because they know,” Sherman said.

If a 1400 SAT score and a degree from Stanford makes you a “thug” then I want my kids to be thugs. @RSherman_25pic.twitter.com/MWuWWPNSWh

If you’re talking about an actual criminal, there are so many descriptive words to invoke besides “thug.” Given its current use as a negative, racially-coded word, avoiding its use seems like an easy and obvious move.

This is the historical definition, according to Encyclopedia Britannica:

“Grandfather clause, statutory or constitutional device enacted by seven Southern states between 1895 and 1910 to deny suffrage to African Americans. It provided that those who had enjoyed the right to vote prior to 1866 or 1867, or their lineal descendants, would be exempt from educational, property, or tax requirements for voting. Because the former slaves had not been granted the franchise until the adoption of the Fifteenth Amendment in 1870, those clauses worked effectively to exclude black people from the vote but assured the franchise to many impoverished and illiterate whites.”

In modern speak, this basically meant the Grandfather Clause let white people off the hook for new voting requirements because their ancestors were already registered voters. Meanwhile, black people were required to fill out impossible literacy tests and pay exorbitant poll taxes to vote. This in turn, meant many black people were unable to vote, while white people weren’t held to the same standard.

The word “Gypsy” was (and is) a racial slur referring to the Roma people. The Roma people are descendants of Northern India who, due to severe marginalization and threats of violence by others, lived a nomadic lifestyle of forced migration for centuries.

During a fraught history, Roma people were taken as slaves in Romania and were targeted for genocide by the Nazis.

The word “Gypsy” is a slang word perpetuating stereotypes of Roma people as “thieves, rowdies, dirty, immoral, con-men, asocials, and work-shy” according to the Council of Europe.

In a similar vein, the term “Gyp” or “getting gypped” means to cheat or get conned, and many connect this meaning as another racist extension of Gypsy.

According to the Oxford Dictionary, the very common phrase “no can do” was originally made popular as a way to make fun of Chinese immigrants.

“The widespread use of the phrase in English today has obscured its origin: what might seem like folksy, abbreviated version of I can’t do it is actually an imitation of Chinese Pidgin English. The phrase dates from the mid-19th to early-20th centuries, an era when Western attitudes towards the Chinese were markedly racist.”

5. Sold Down The River

“The phrase ‘sold down the river’ came from Louisville, Kentucky, where the enslaved were traded in one of the largest slave markets of the 19th century.”https://www.citylab.com/equity/2017/02/louisville-confronts-its-redlining-past-and-present/517125/?utm_source=twbu00a0u2026

Upon first hearing, many people associate the phrase “sold down the river” with the notion of being betrayed, lied to, or otherwise screwed over. While these definitions all technically apply to the origin, the root of this phrase is much more bleak.

According to a report from NPR, being “sold down the river” was a literal reference to slavery, and the families that were torn apart in the south.

“River” was a literal reference to the Mississippi or Ohio rivers. For much of the first half of the 19th century, Louisville, Ky., was one of the largest slave-trading marketplaces in the country. Slaves would be taken to Louisville to be “sold down the river” and transported to the cotton plantations in states further south.

The GOP argument on Obamacare has more than a whiff of Reagan-era racial “welfare queen” politics —> http://www.nationaljournal.com/politics/a-brutal-translation-of-the-disincentive-to-work-20140206u00a0u2026

The term “welfare queen” was first popularized by Ronald Reagan’s 1976 presidential campaign in which he repeatedly painted a picture of a Cadillac-driving welfare queen.

This straw woman in Reagan’s campaign served as a racially-charged exaggeration of one minor case of real welfare fraud used to pedal his platform for welfare reform.

Needless to say, the term has sadly lived on as a racially-charged vehicle used to undermine the importance of welfare programs, while peddling gross stereotypes about black women.

On top of all the other offenses, this stereotype is of course ignoring the fact that poor white Americans receive the most welfare out of any economically-disadvantaged demographic.

The term shuck and jive is both common and very obviously rooted in the language of slavery.

According to the Online Etymology Dictionary, the phrase shuck and jive refers to:

“The fact that black slaves sang and shouted gleefully during corn-shucking season, and this behavior, along with lying and teasing, became a part of the protective and evasive behavior normally adopted towards white people in ‘ traditional’ race relations.”

Likewise, the modern usage of this phrase refers to pandering, selling out, or instances in which black people go along with racist white people’s wishes. Again, not a phrase to be thrown around lightly.

This is the official definition, according to the Oxford Dictionary:

“Long Time No See was originally meant as a humorous interpretation of a Native American greeting, used after a prolonged separation. The current earliest citation recorded in the Oxford English Dictionary (OED) comes from W.F. Drannan’s book Thirty-one Years on Plains (1901): ‘When we rode up to him [sc. an American Indian] he said: ‘Good mornin. Long time no see you’.”

The act of committing genocide is not limited to human lives, but also translates to a normalized cultural violence. Deconstructing, mocking, and erasing someone’s language contributes to this pattern of colonialism.

Did you know the phrase ‘peanut gallery’ has racist origins?nnIt was the cheapest and worst part of the theater, and the only option for Black attendees. No one wanted to sit in the peanut gallery and today, no one wants to hear from the peanut gallery. #RewriteBHM #BHMpic.twitter.com/vwHHHWLeVP

Most modern uses of the term “the peanut gallery” is in reference to a group of people who needlessly criticize or mocking another person. However, the historical roots of this term are much more racist and painful.

Originally, this term referred to the balconies in segregated theaters where black people were forced to sit. The nickname “peanut” was given due to the fact that peanuts were introduced to America at the same time as the slave trade. Because of this, there was a connection drawn between black people and peanuts.

MINORITIES MUST STAND UP TO ABUSE:nKneeling to protest at games is tasteful yet effective. But white owners and racists think blacks are too uppity. n”UppitynWord used by racist old white Southerners to refer to any black person who looks them in the eye.” –URBAN DICTIONARYpic.twitter.com/CrRQJqTyTl

As of now, the word “uppity” is often used as a synonym for “stuck up” or “pretentious” or “conceited.” But the roots of the word are far more specific and racist.

The word Uppity was first used by Southerners to refer to slaves who did not fall into line, or acted as if they “didn’t know their place.”

So, basically, any black person who overtly stood up to racism. Given the heaviness of this origin, it seems best to leave this word at home when looking to describe a pretentious acquaintance.

Sadly, given our ugly history, there are many more words and phrases I could add to this list. In the meantime, hopefully this list is helpful for navigating the racism innate in our language.

The article was originally published by our partners at someecards and was written by Bronwyn Isacc.