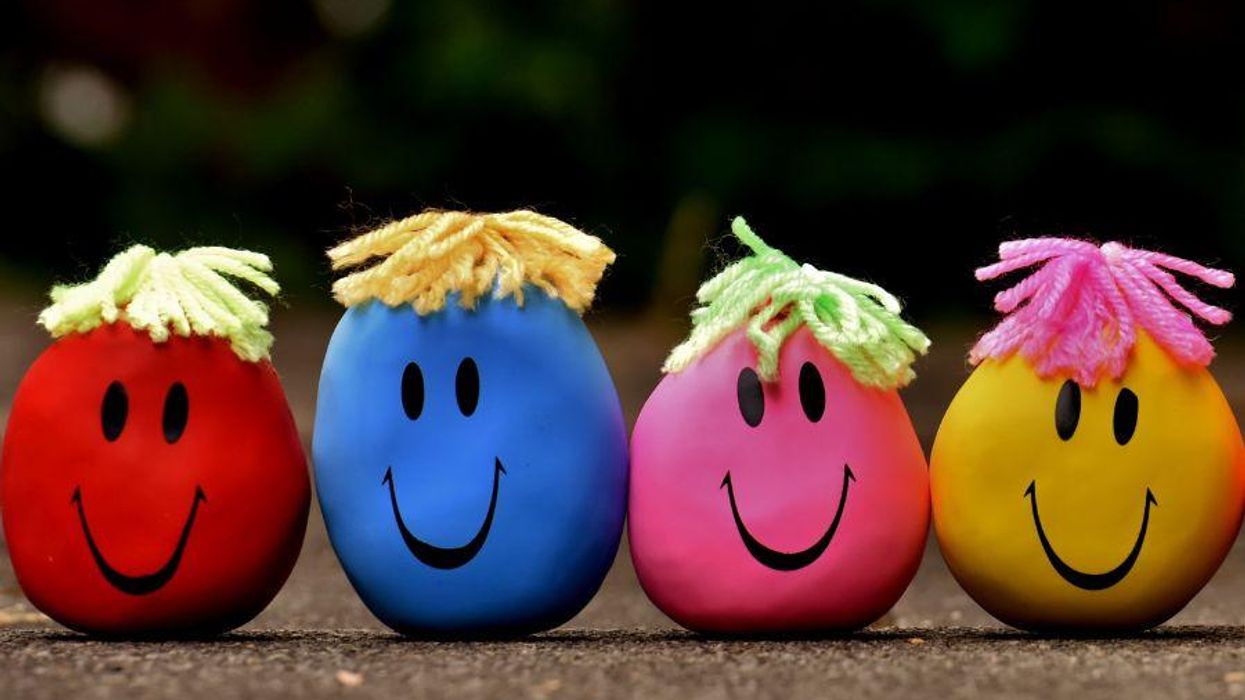 When headlines and social media seem to be dominated by the negative, we all need reminders that the world is full of wonderfulness. Joy connects and inspires us and can be found everywhere—if we keep our eyes open and look for it. One of our goals at Upworthy is to make that search a little easier by telling stories that highlight the best of humanity and sharing the delights, large and small, that unite us.

Each week, we collect 10 things that made us smile and offer them to you to enjoy and share with others. We hope this week’s list tickles your heart and brings a smile (or 10) to your face as well.

1. Tico the parrot is a master vocalist. Not even an exaggeration.

On a dark desert hwy, cool wind in my hair…

We’ve shared some delightful parrots in these roundups before, and each one somehow seems to out-entertain the last. I did not see Tico’s vocal skills coming, though. The intonation! The vibrato! Even my music major daughter was blown away by this singing bird.

You can see more of Tico singing with guitarist Frank Maglio on YouTube and TikTok.

Three-year-old Blakely is going to be a big sister for the second time, but this time she has questions. Every parent felt that weighty pause when she asked how the baby got into Mommy. (You just never know when that question is coming, so it’s hard to be prepared with the right answer for the age and maturity of the kid asking.) Little Blakely sure is a doll, though. Read the full story—and get some expert tips for how to field kids’ questions in an age-appropriate way—here. 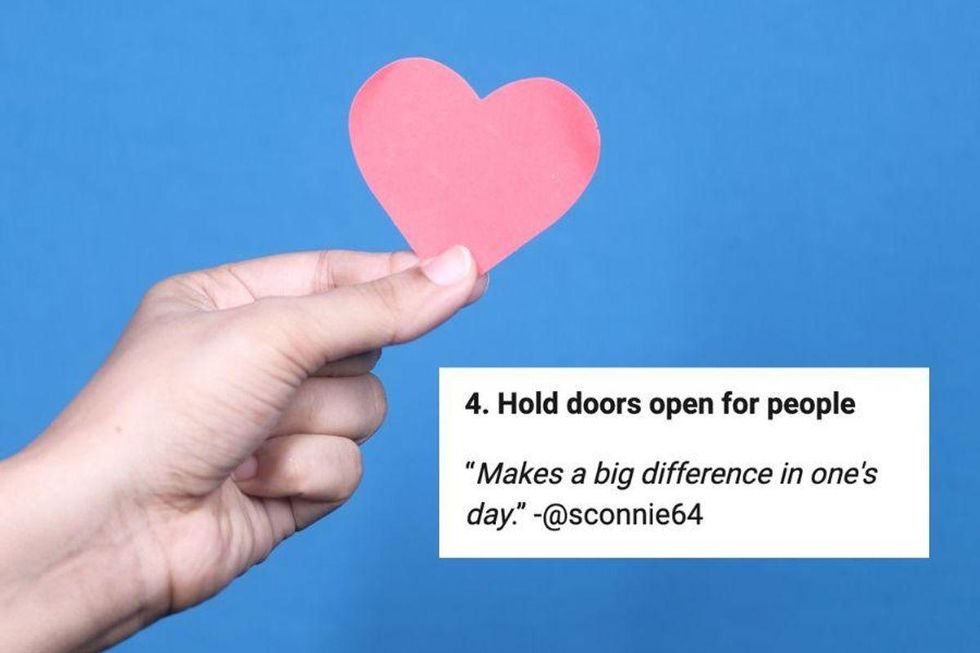 A Reddit user asked for ideas of kind acts people can do every day, and people shared their thoughts. Some of the ideas were profoundly simple, and not necessarily things we might think of, like being aware of how we’re impacting those around us or leaving a place a little better than we found it. See the whole collection of acts of kindness here.

4. Woman finds out her best friend named her baby after her and it’s a roller coaster of emotion.

Meeting a brand new human being is always a special moment, and when it’s a loved one’s baby it’s even more special. But Mireya meeting her best friend Morgan’s baby pushed special into a whole other stratosphere when she found out she’d become a namesake. That second when it sunk in and then the disbelief. “What? No, you did not.” Oh yes, she did. So much love here.

5. Little chimpanzee kiddo is greeted with hugs from his new family.

Oh, the hugs for Beckley! This is almost too much sweetness for one video.

It was shared by Liberia Chimp Rescue & Protection, a sanctuary and conservation center in Liberia that rescues baby chimps from the illegal bushmeat and pet trades. While most of the chimpanzees the workers rescue and rehabilitate aren’t able to be returned to the wild, they do get to live their life in a protected forest with other chimps. You can read more about their work here.

6. The Onion filed an amicus brief with the Supreme Court and it’s seriously hilarious. 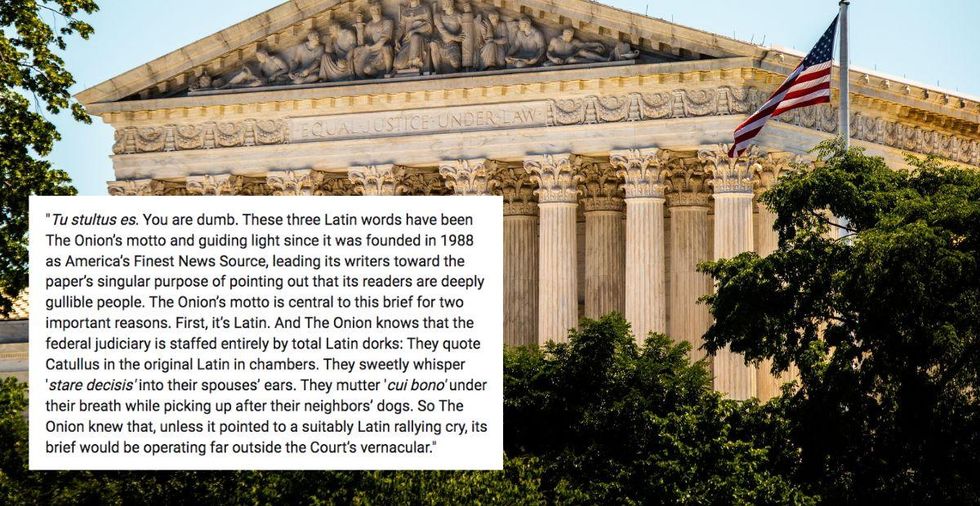 It’s a real brief with a real argument for a real First Amendment case, but it’s unlike any other court filing you’ll ever read. The satirical news site is petitioning the Supreme Court to review a case of a man who was arrested and prosecuted for creating a Facebook page parodying the Parma, Ohio, police department. After the man was acquitted by a jury, he sued the police for violating his constitutional rights, but his case was thrown out because the police were granted “qualified immunity.” In defense of the man’s—and everyone’s—First Amendment right to parody, The Onion filed a 23-page brief utilizing the very parody it’s defending, and it’s a brilliant and hilarious read. I mean, who else could call the federal judiciary “total Latin dorks” while making a solid argument? Read the full story here.

7. Kids casually chatting with scientists is the cutest thing everrrr.

Kids are naturally curious, which makes them the perfect people to ask questions about science. Upworthy and Pfizer have been inviting kids to chat with scientists and there’s just no way to predict where their conversations will go. Precious Marcelo here with his “I’ve got like 27 more years” to think about a career while chatting with virologist Vidia Roopchand was just so delightfully real. You can find more of these kid chats on our Instagram channel.

8. Four-year-old sings The Isley Brothers with his whole soul.

Goodness. “Driftin’ on a nemberee…all we need is candlewight…” He’s putting his entire self into singing that song. Beautiful voice from her, too.

9. The Rock’s daughter pranks him with a water balloon as he’s waking up.

“Good Morrrnniiiiing!” HA. She knows how to get her dad good.

Not gonna lie. I would not have the good-natured patience of The Rock if my child broke a water balloon over my face in bed. But this isn’t the first time he’s played the “Daddy, close your eyes!” game, so he knew something was coming. See more of Jazzy’s pranks on her pops here.

10. Let’s welcome the weekend with the exuberance of this ball-fetching doggo.

Even without the bouncing in anticipation, the tail wag says it all. Pure joy. Bring it.

That’s it for this week! Come back next week for another round of joy on us. And if you’d like more stories like this in your inbox, subscribe to our free newsletter, The Upworthiest, here.