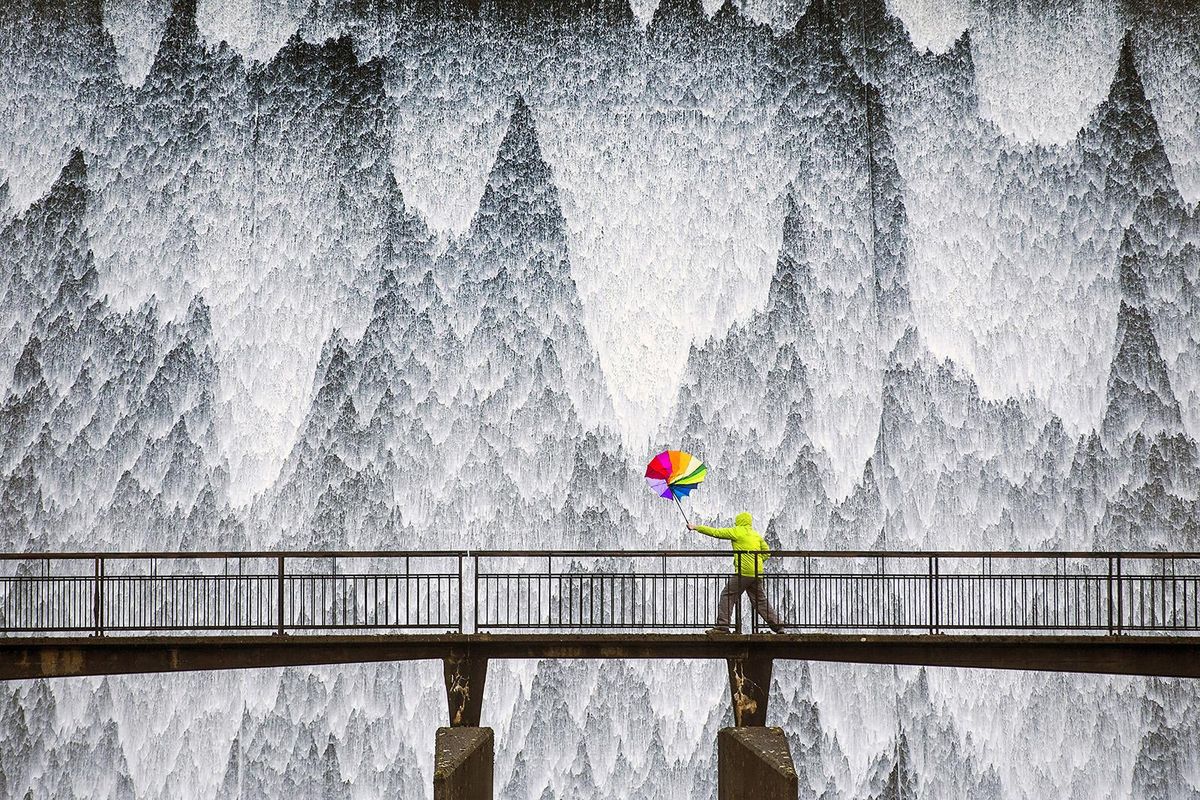 Capturing the perfect image is difficult even under the best of conditions, but when trying to get a snapshot of once-in-a-lifetime moments in nature, the task becomes herculean. The reward, however, is witnessing beauty almost too dazzling to be real.

On Oct. 6, Christopher Ison was awarded the title of Weather Photographer of the Year for his breathtaking photo of storm waves crashing against a lighthouse. According to My Modern Met, judges received entries from more than 119 countries and created a shortlist of 22 stunning images. The annual contest, held by the Royal Meteorological Society, celebrates weather of all forms, from whimsical rainbows to chaotic lightning storms and phenomenon in between.

Below are the eight winners this year. Believe it or not, some pictures were even taken with a smartphone. 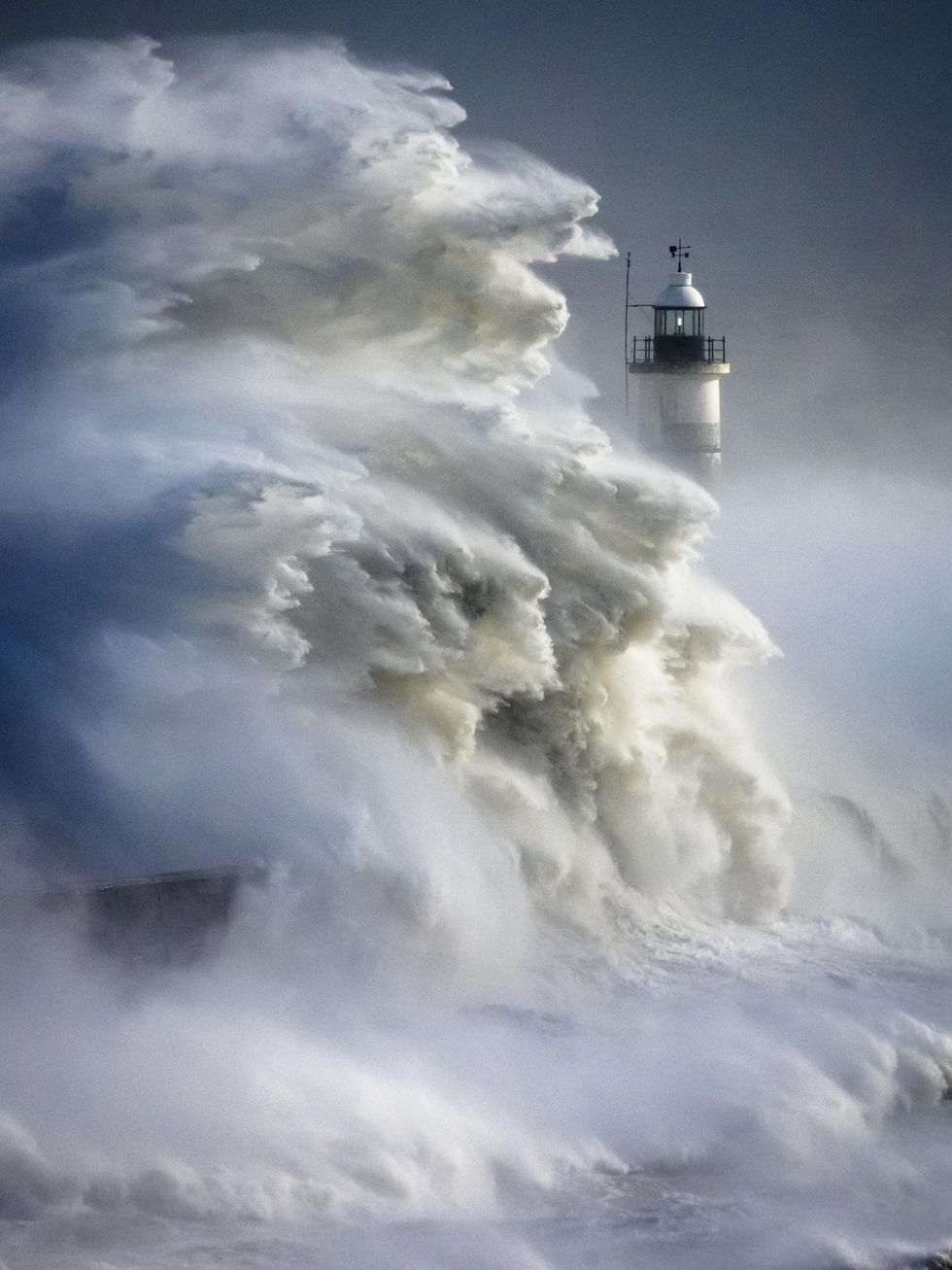 Ison’s bold, dramatic, almost monochromatic image comes as a result of Storm Eunice, an intense cyclone that wreaked havoc in the U.K. in February. Its 122 mph wind speeds set a new record in England.

Needless to say, getting the photo successfully (and safely) would not be easy. Ison chose to head to high ground and stand slightly further away from the harbor wall. With his back to the weather, he snapped the image.

“When the storm was predicted and that it was carrying the first ever red warning for the south coast, I knew I had to find a spot to record it – this was going to be big!” Ison shared. 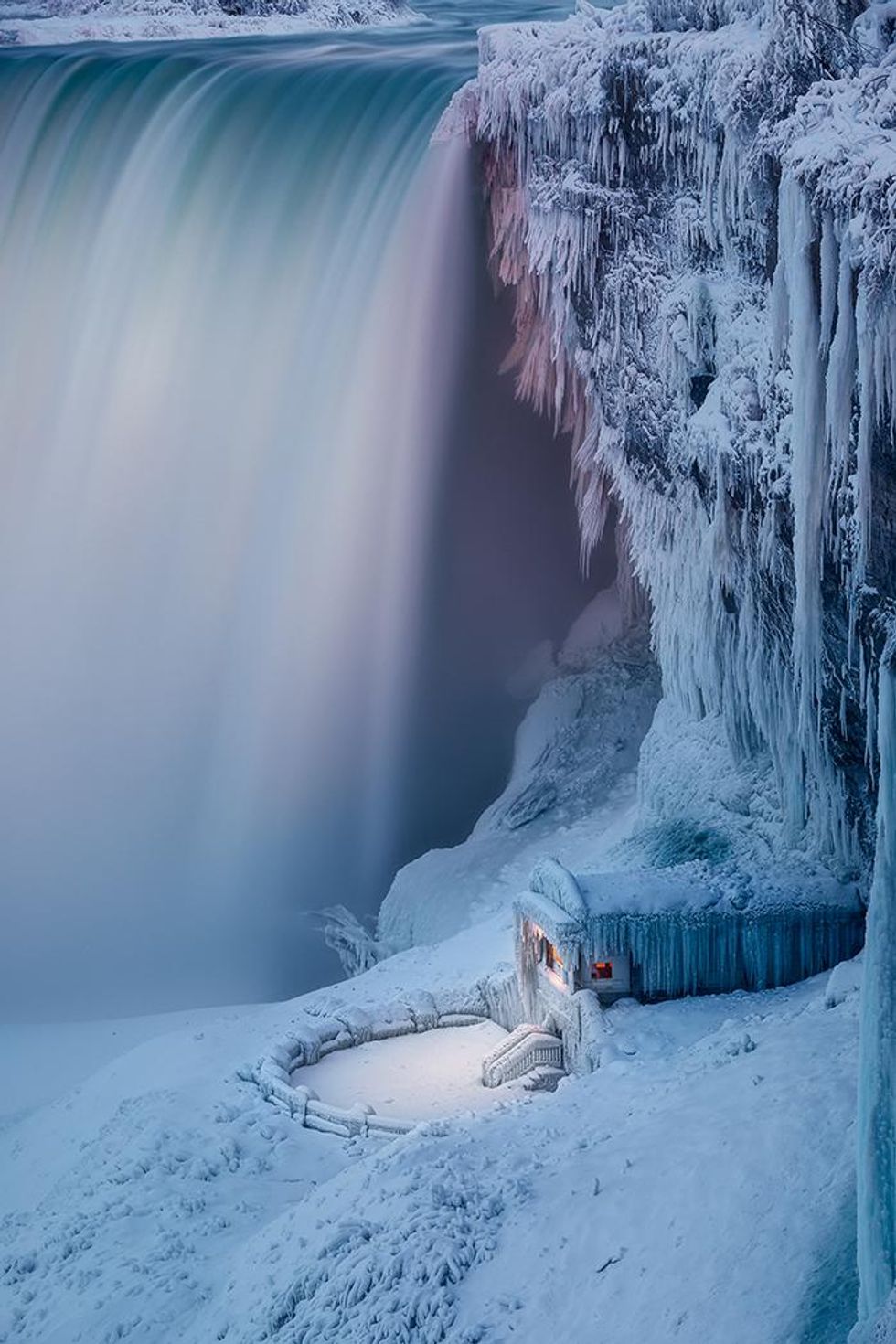 Photographer Zhenhuan Zhou perfectly captured the mystical essence of a frozen Niagara Falls in winter. Extreme low temperatures cause sheets of ice to form over the water’s surface, giving the illusion that the Falls have completely stopped, when in reality water continues to flow underneath.

The cold imagery is balanced out by the warm glow of a single light emanating from a cozy cabin, which clearly belongs to some kind of winter fairy.

3rd place: “Ghost Under the Cliff” by Emili Vilamala Benito 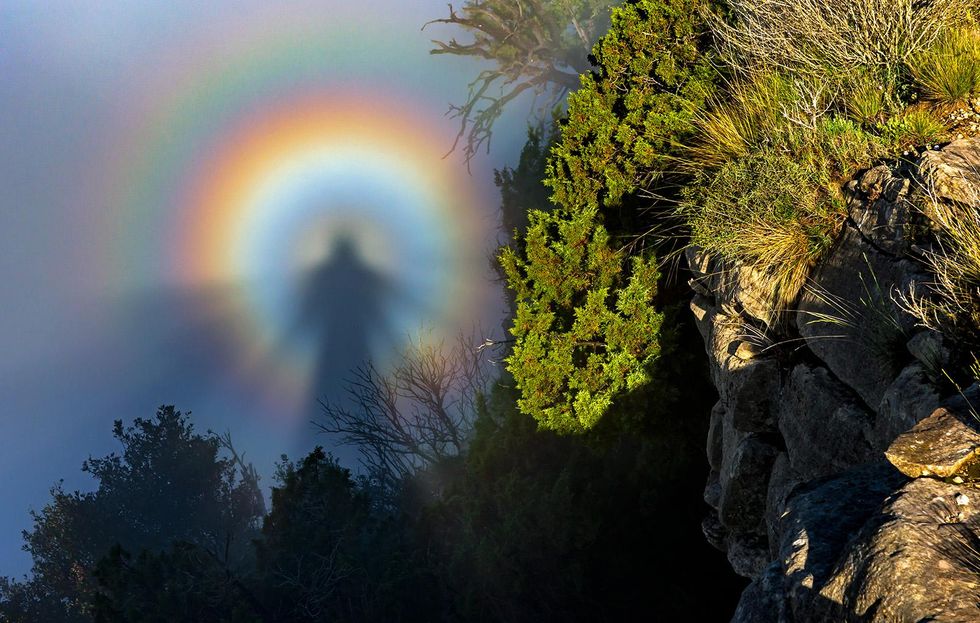 The shadowy figure shrouded in a rainbow seen in Emili Benito’s photograph is called a Brocken Spectre—an optical illusion that occurs when the observer’s shadow is magnified as it’s cast onto a cloud or mist.

The Brocken Spectre is a type of glory. Glories are often seen by air travelers, who notice the shadow of their airplane cast on clouds below. The airplane’s shadow will be moving along on the cloud tops, surrounded by a rainbow-like halo of light as it flies through the air. 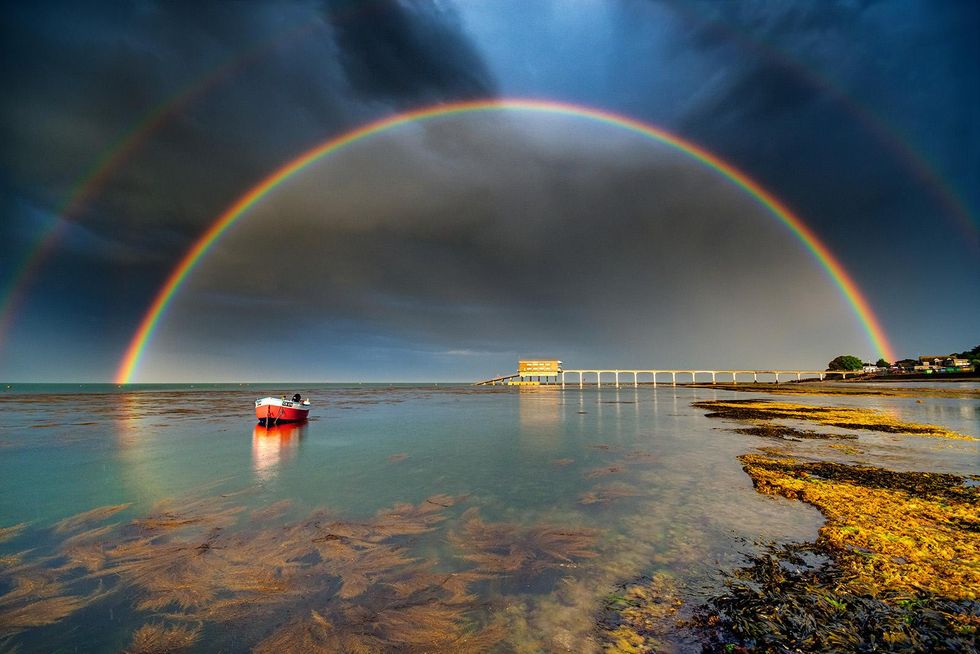 Photographer Jamie Russell has apparently been chasing storms all across the Isle of Wight, capturing gorgeous rainbows. But the one found after a show in Bembridge was the ultimate prize, causing him to rush into “waist-deep water, fully dressed” to compose this image.

This double rainbow comes as a result of sunlight being refracted twice within a raindrop. A key characteristic of the “second bow” is a fainter hue and reversed color sequence. 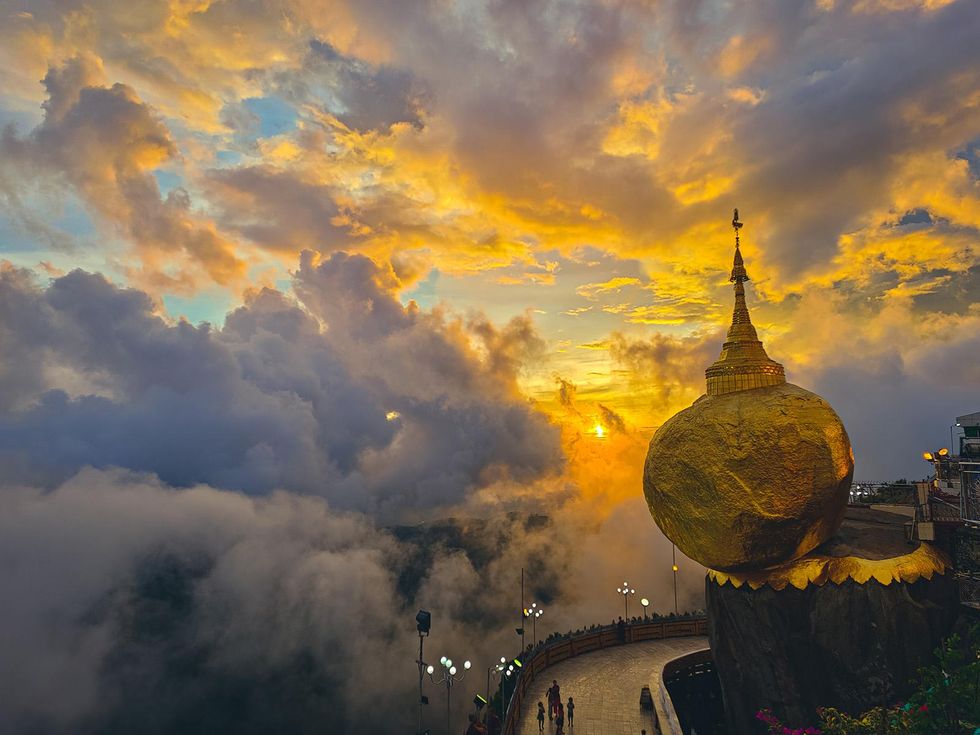 This one’s a delight to weather enthusiasts and architecture buffs alike.

The richness of the sunset happens because of Rayleigh scattering, aka nature’s Instagram filter. When the sun is very low (as in sunrise and sunset), its light has to travel further through the atmosphere. Blue light, which is shorter in wavelength than red light, is therefore scattered away and deflected before our eyes can see it. The longer wavelengths of orange and red light are scattered less, and therefore more visible. Not to mention gorgeous. 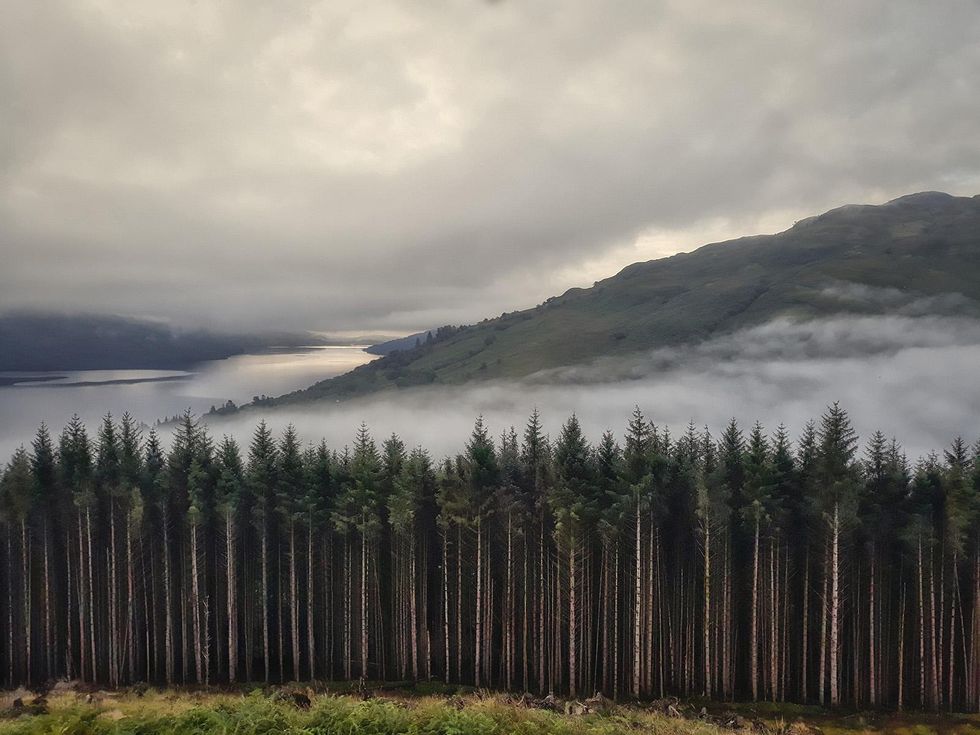 I knew that smartphones could take some pretty epic pictures, but I didn’t know they could be this epic.

Photographer Vince Campbell was up before the sun and walking with his dogs Oscar and Ollie to capture this beautiful misty scene.

This is a “misty” scene, rather than a “foggy” one, because of the visibility. Mist and fog are both caused by water droplets suspended in the air close to the ground. Mist is less dense and dissipates more quickly. The rule of thumb is—if you can see more than 1,000 meters (in the pictures, for example, you can see all the way across the lake), then it’s mist. If you can’t see past 1,000 meters, it’s fog. 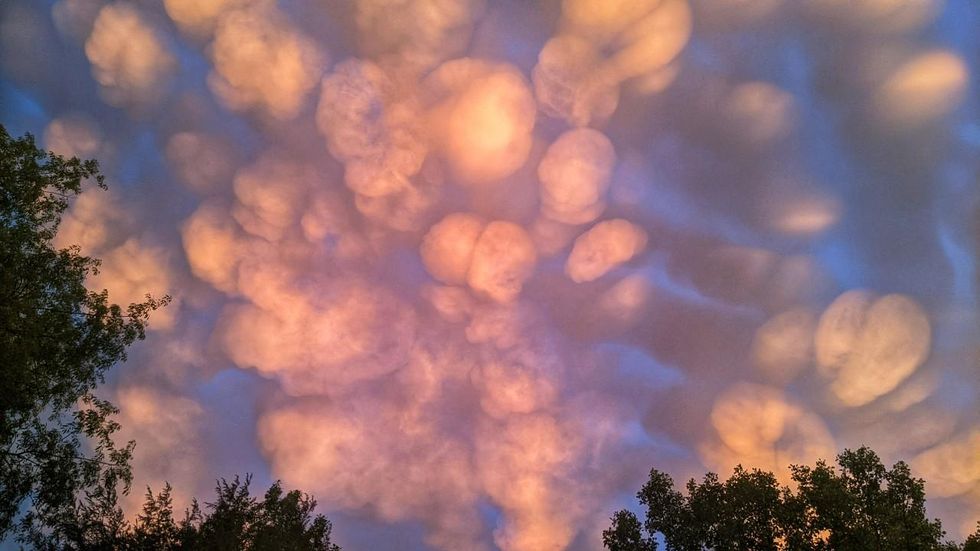 “The sky was completely lit up in a way I had never seen before, like these beautiful backlit watercolor clouds,” recalled Young Photographer of the Year Eris Pil.

What looks like a Van Gogh painting in the photo are mammatus clouds, which, despite their fluffy, pleasant seeming demeanor, are created under tumultuous conditions. Often, but not always, they are sweet-looking harbingers of severe thunderstorms and even tornados. But hey, they’re nice to look at.

Pil shared that this photo was her “first time ever witnessing” mammatus clouds, and that she hopes for the “opportunity to see them again.” 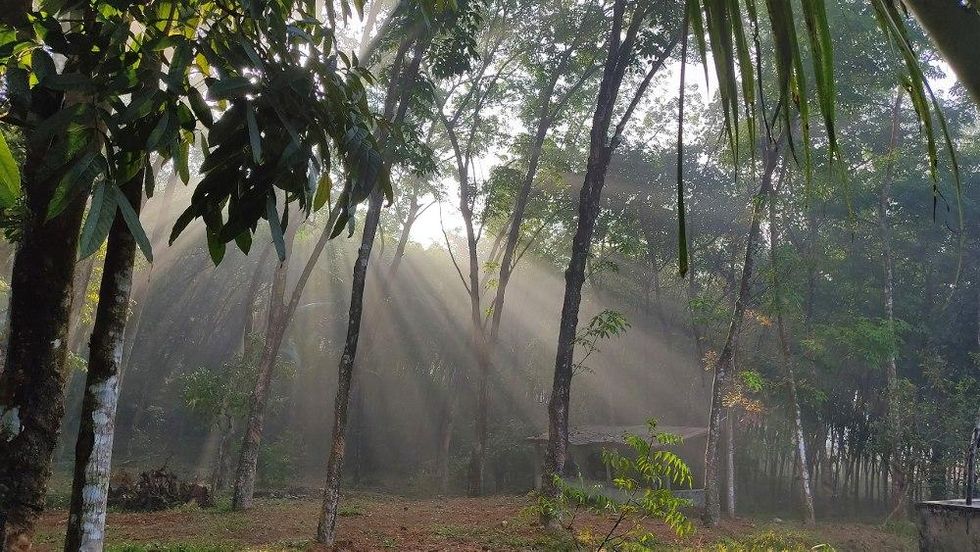 Photographer Shreya Nair was taking a walk through their backyard in India when they spotted light peaking through the tree canopy.

Wanna bask in beautiful weather year-round from the comfort of your own home? The Weather Photographer of the Year 2023 calendar is available on pre-order.