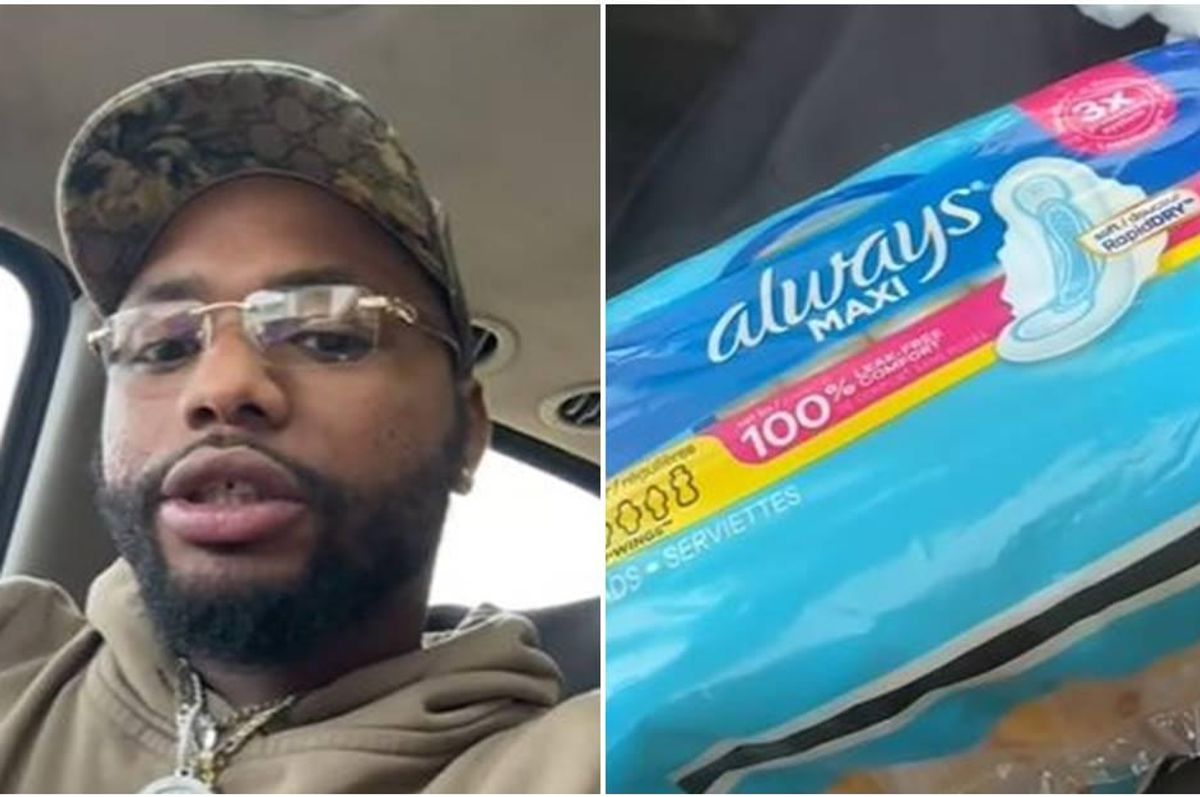 Some dads need a little bit of help getting up to speed when it comes to the world of feminine hygiene products. But that’s fine as long as they are willing to learn. A TikTok user named @k.othabarber, who we’ll call K.O., got the call to help out his daughter who got her period in school and one user said he hilariously “overstood the assignment.”

K.O. is a barber in Minneapolis, Minnesota, who posts videos of himself taking unflattering haircuts and turning them into something amazing.

“So my baby mama just text me and told me like, ‘hey baby dad, your daughter just got her period at school.’ I’m like aight, cool, what I need to do?” K.O. said in the viral video. “She like, ‘take her some pads up there.’ I’m like aight, I’m finna take my dog to the doggy appointment and then I’m finna slide up there. She like, ‘aight cool, get her some maxi pads. Get her some Always pads with wings,’” he continued.

Don’t read any more until you watch the video.

“So, I feel like I should tell y’all what I did,” K.O. said before the video cuts to a large, 100-pack of sanitary napkins and a to-go container filled with chicken wings. He was supposed to get Always pads with wings, not chicken wings on the side.

Even though K.O. had a bit of a misunderstanding, TikTok had his back because he went out of his way for his daughter. It was also humble of him to admit his rather egregious mistake.

“Overstood the assignment, king,” RayP0710 wrote. “She might need some chocolate too but you did A Great Job Dad!” Asia added. Others were happy that K.O. accidentally dealt with the emotional side of menstruation.

“The pads will help her with her cycle and the wings is emotional support & care. Add a little note telling her that you love her,” sola_scriptum wrote. “Good job dad! She’ll be happy you brought both,” Tiffiney Lee added.

Although K.O. made a rookie mistake while getting the pads, it’s cool that he was excited to help and did what he thought was right. It was also encouraging that after the video went viral, nearly everyone was supportive of K.O. helping his daughter with her feminine hygiene needs.

When men are open to learning about the mensural cycle it works to destigmatize periods. This is vital to women achieving equality because the lack of conversation around menstruation leads to misunderstandings that hold women back.

A poll published in the New York Post found that “58 percent of women have felt a sense of embarrassment simply because they were on their period” and that “44 percent of men admit to having made a joke about or comment on a partner’s mood when she was on her period.”

When men like K.O. have no problem talking openly about periods and even having a little fun, it goes a long way toward opening up the conversation for everyone. The more comfortable we get talking about menstruation, the more equitable the world becomes for women.