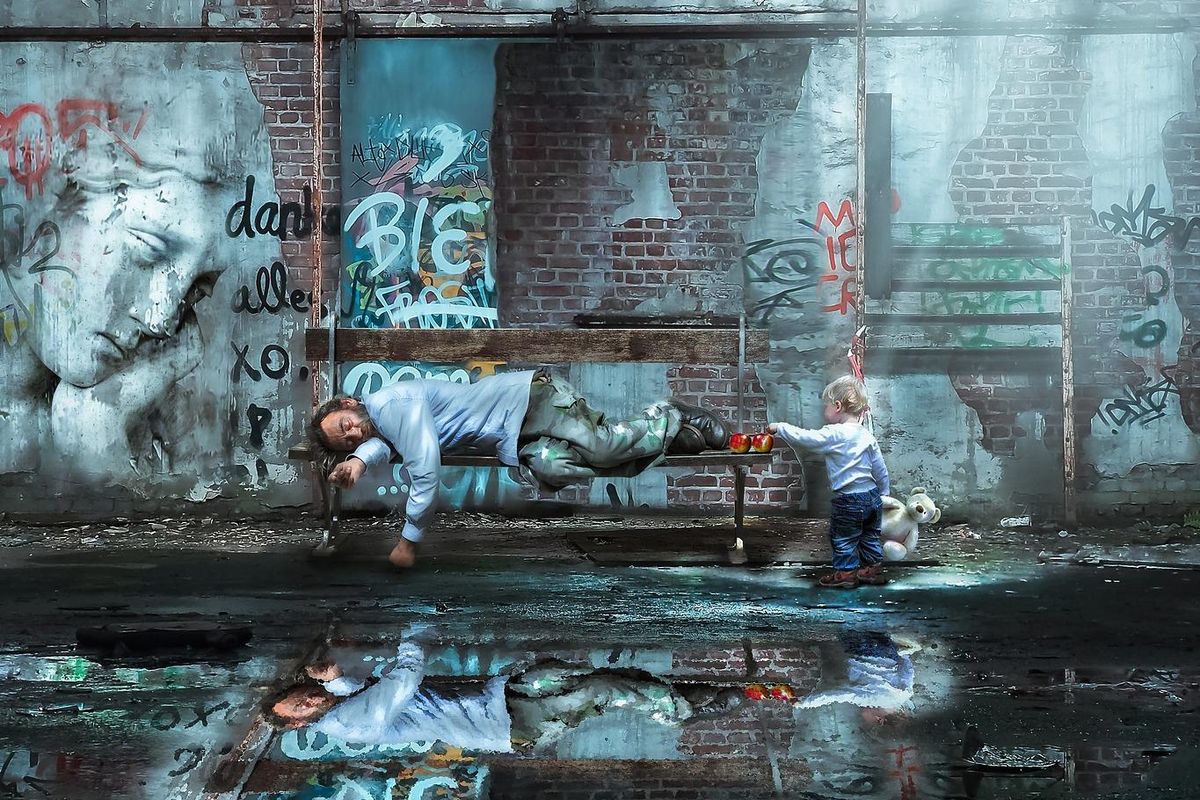 This article originally appeared on 02.06.17

As their name suggests, anti-homeless spikes are intended to keep homeless people away.

They’ll usually crop up in areas where a homeless person might find some quiet away from the hustle and bustle, or a spot that’s relatively well-sheltered from the elements.

In January 2017, spikes like these appeared outside the Pall Mall Court in Manchester, England. And many people were not happy about it.

“This is not the answer to rough sleeping,” Pat Karney, Manchester council spokesman, told the Manchester Evening News of the spikes. “It’s demeaning in that way.”

One of those unhappy people was a local woman named Jennie Platt. The Manchester mom — who called the spikes “a Scroogey thing to do” — wasn’t about to let the heartless act fly.

As Mashable reported, Platt and her kids decided to give the spikes a more comfortable upgrade.

Platt — with help from her 10- and 11-year-old sons, along with a few of their rugby teammates — covered the spikes with cushions and pillows.

“The building owners are treating human beings like pigeons,” Platt told the BBC, noting she woke up “with a right bee in [her] bonnet” after learning the news and decided she needed to do something.

Link to Twitter where what Platt and her sons did can be seen below:

Platt also left sandwiches and chocolate bars for anyone who could use a snack, encouraging folks to “take a seat and have a bite to eat.”

“It’s a spot where people can keep warm and sheltered,” explained Platt. “People don’t need to be that mean.”

The spikes are right outside Pall Mall Medical, a healthcare facility that rents out a space in the court, which said it had nothing to do with their installment. GVA, the company that manages the building, declined to comment to the Manchester Evening News.

Update Feb. 7, 2017: The spikes have been removed by the building’s owner after public outcry, the Manchester Evening News reported.

Unfortunately, the anti-homeless renovation in Manchester is indicative of a larger issue that doesn’t stop at spikes.

Governments and businesses alike have sneakily built up anti-homeless infrastructure in urban spaces all around the world.

If you’ve been to Tokyo, you may have noticed “dangerously slippery” benches designed specifically to be uncomfortable, warding off anyone who wants to rest more than a few moments.

In places like Salt Lake City and Lincoln, Nebraska, you might come across benches with vertical slats between the seats, made to deter anyone from lying down.

A man saws at an armrest in Toulouse, France, in 2006 in protest of the mistreatment of homeless people.

This type of urban planning pushes the problem of chronic homelessness aside without helping to provide a solution.

Shooing away homeless people by building slippery benches, installing excessive armrests, and adding spikes to sidewalks doesn’t mean homeless people disappear. It means the most vulnerable among us — many who struggle with mental illness or are living on the street because they can’t stay at a shelter — are left unwelcome in larger and larger spaces within our communities. This type of heartless infrastructure only exacerbates the problem.

Instead of hoping homeless people disappear, we should focus our attention on ideas that help them in the long run.

Beyond supporting your local homeless shelter by volunteering and donating, you can rally your representatives to join the fight. For example, Housing First — a strategy that provides people with a home quickly and unconditionally, then gives them the resources they need to stand on their own (like help with addiction or career services) — is a model that’s been proven to work in several cities and states. Make sure the leaders in your area know you care about this issue and want funding for local initiatives, like Housing First, that make a big difference.

Platt realizes her efforts may be short-lived. But as more people notice her deed, she hopes it will change hearts and minds.

“I know [the cushions] won’t last and I know they’ll get wet,” she said. “But the people who manage that building need to know how to treat people.”