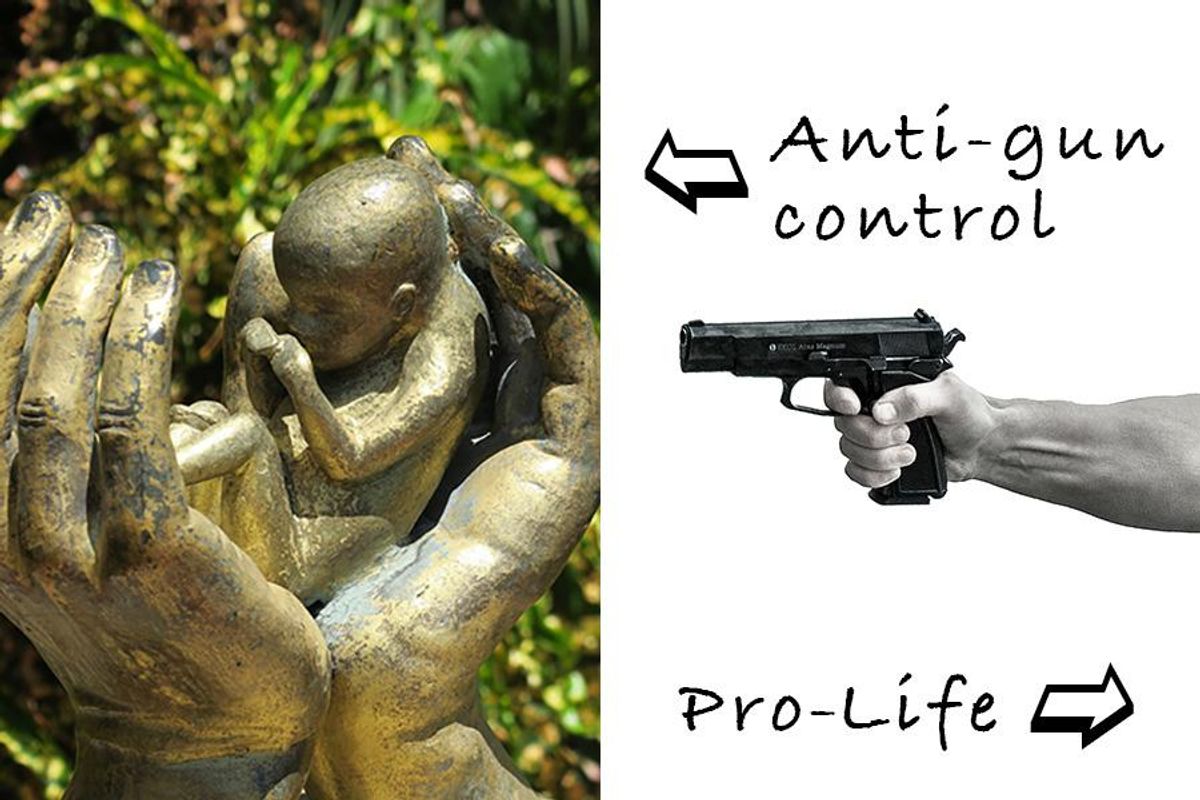 This article originally appeared on 10.06.15

A previous episode of “The Daily Show” addressed two hot-button issues at the same time: abortion and gun control.

It was one of the earliest tests for new host Trevor Noah, and he pretty much knocked this one out of the park. The segment began with a discussion about the pro-life movement’s laser focus on making completely legal abortions really, really hard to get.

Noah started with the movement’s push to defund Planned Parenthood on what turned out to be deceptive, altered, and debunked videos. And even he had to admit, pro-lifers are pretty great at what they do, given that they were able to get Congress to hold hearings based on … nothing, really.

So Noah turned his attention to the mass shooting in Oregon — the 294th of the year — and how we as a country are once again discussing gun control.

If pro-lifers are so concerned about the preservation of all lives, Noah wonders, then why don’t they support common-sense gun control measures?

There’s no need for doctored videos. Gun violence statistics exist (and they’re terrifying). Imagine if the pro-life movement rallied behind that?

Noah then brilliantly compared reactions from two “pro-life” presidential candidates on the Oregon shooting and on abortion.

First up was Jeb Bush on what happened in Oregon. He urged against reactionary gun legislation. “Stuff happens,” he said.

But compare that to his recent comments on abortion — which is, again, totally legal:

Now that’s a response fitting for a mass shooting.

Noah looked over to candidate Carly Fiorina for her thoughts on the Oregon shooting. Similar to Bush, Fiorina cautioned against taking any action on gun control until we know more about what happened.

Now compare that to her comments on abortion:

It’s not clear whether pro-lifers are waiting for an even 300 mass shootings in 2015 — which, at the pace we’re going, should be sometime in the next month or so — before taking action. But in the meantime, it’s really hard to see the “pro-life” rhetoric as anything more than hypocrisy.

In closing, Noah posed this to pro-lifers: If you actually care about lives, do something about guns.

Redirect the energy, lobbying, and rhetoric spent on fighting a more than 40-year-old Supreme Court decision toward sensible steps to curb gun violence.

“They just need to have a superhero’s dedication to life,” Noah says. “Because right now, they’re more like comic book collectors: Human life only matters until you take it out of the package, and then there’s nothing left.”

Watch the complete segment in the video below.