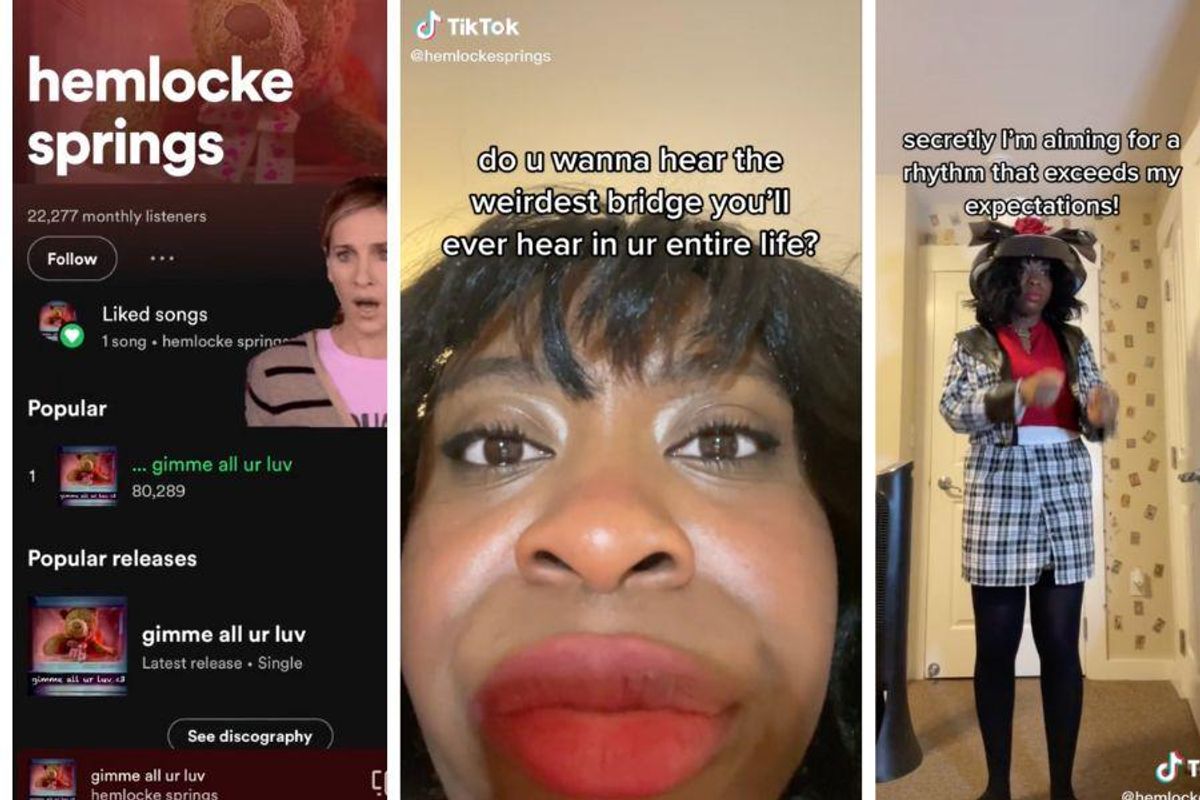 Sometimes, life takes us on unexpected detours. One day you follow an impulse and suddenly you have a brand new purpose.

Such was the case for Isimeme Udu (who also goes by Naomi), who not only managed to become an overnight musical success on TikTok, she did it while pursuing a Master of Science degree from Dartmouth College.

Her musical persona, Hemlocke Springs, came from a random-name generator site—a strategy made famous by Donald Glover (aka Childish Gambino)—and is reminiscent of pop stars with eccentric vocal stylings and bold fashion choices like Kate Bush and Marina. She jokes that people have ascribed her sound to countless genres and similar artists. If you ask her, it’s all “regular shemgular pop.”

Right now, Udu has more than 235,000 loyal followers on TikTok, something she didn’t exactly anticipate as a full-time medical student. But immediately after releasing the bridge of her then upcoming single “girlfriend,” the video amassed a million views, was used in more than 60,000 subsequent TikToks and even got the attention of Khalid, who can be seen bopping along to the catchy tune. And since the song’s release on Nov 2, it has racked up more than 9 million streams on Spotify.

Listen below, and tell me that’s not an earworm.

The song has on more than one occasion been called an “awkward Black girl anthem” by listeners, and Udu herself has become a role model for Black women who want to let their weirdness shine.

It has also been lovingly embraced by people on the autism spectrum, who find ecstatic release in the ultra funky beat.

Udu didn’t expect anyone to even listen to “girlfriend,” much less for it to achieve such overwhelming success. She shared in an interview with People that she would previously post a song onto her SoundCloud, then ”remove it literally one minute later.” Making secret music became a habit for seven years.

When she finally decided to keep her songs up, she released a song called “gimme all ur luv,” which also caught celebrity attention from the likes of Bella Hadid and Grimes. No easy task, given the huge amount of content from aspiring artists on the platform.

Though it wasn’t part of the plan, Udu is embracing her seemingly destined career as an artist. She shared with People that she has since finished out a “hellish” final semester at Dartmouth, but fully switched gears for the time being. She has signed with a record label, is working on an album and hopes to perform live one day. “I’ve been practicing in my room with a hairbrush,” she quipped.

Hemlocke Springs, of course, isn’t the only artist to find unexpected fame on TikTok. Though the platform making music more accessible has some potential drawbacks—especially when the need for constant output and hacking the algorithm supersedes quality—it has undeniably helped people express themselves in ways that might defer from the traditional or mainstream. I mean, would this music or “goblin metal” or musical mashups of cat noises have been as widely embraced only a few years ago? I think not. And it’s a good thing that we are celebrating uniqueness. Clearly, it means a lot to a lot of people.

Also, if you’ve been looking for a sign that you should actually pursue your own weird passions—be it music or art or some kind of avant-garde gardening—this is it.