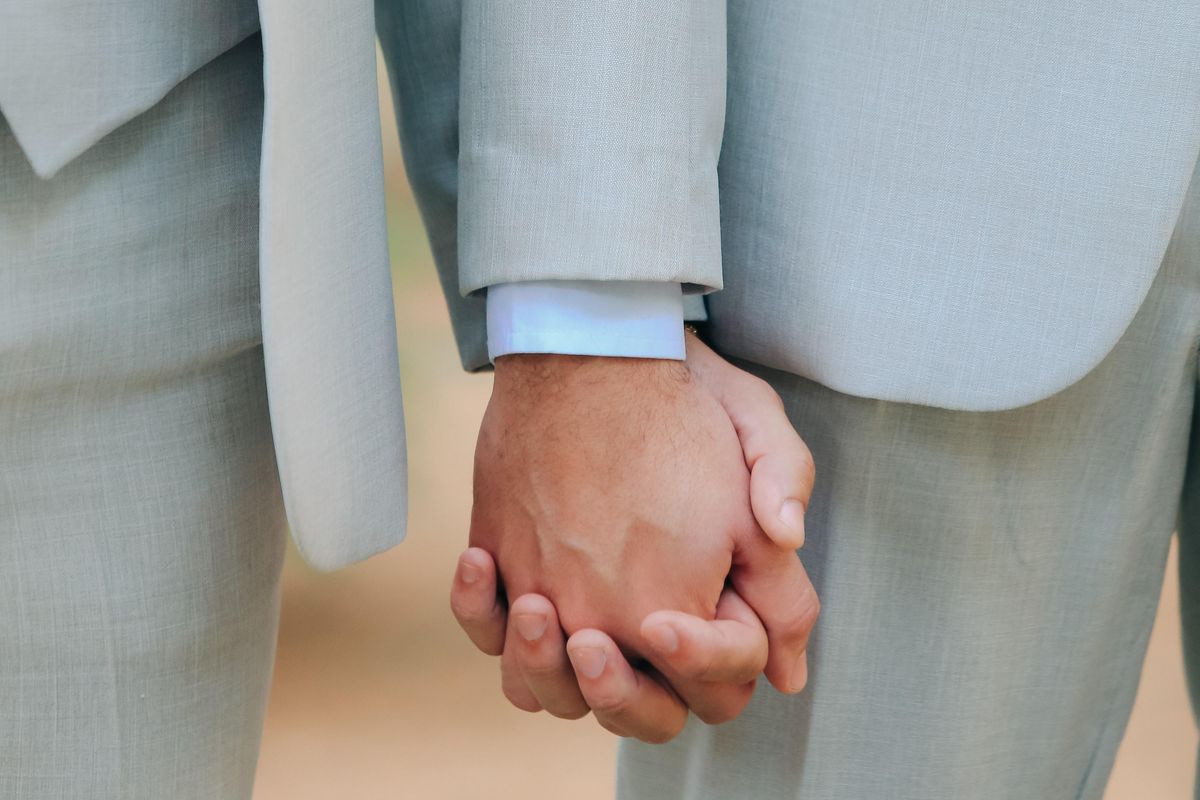 This article originally appeared on 05.14.18

Seaside Heights is a town on the Jersey Shore: a place synonymous with Snookie, The Situation, and a heaping helping of fist-pumping.

So you probably wouldn’t be judged for thinking it’s not a place of overwhelming inclusivity. In this case, though, you’d be wrong.

Let’s set the scene: It’s a spring night during prom season and deliriously happy high schoolers are sauntering down the boardwalk on their way home from a night they’ll never forget.

As couple after couple passes by one particular rooftop bar, some bros overlooking the scene are screaming at couples to kiss. And then there’s a pause.

Walking down the street is a gay couple in matching tuxedos (adorable). They’re holding hands (adorable).

But here’s the thing — as openly gay “Good Morning America” producer Mike Del Moro noted on Twitter (where he live-tweeted this occurrence), they’re doing it in a town “where — not so long ago — young men would shout the word ‘f****t’ out their car window as we’d stroll along the boardwalk.”

Del Moro, who was on the boardwalk with his mother and boyfriend, was instinctively nervous for the couple.

That makes total sense. Even in an ultra-liberal center like San Francisco, I’ve been harassed for holding hands with my husband. So in a place like Seaside Heights, Del Moro definitely had cause for concern.

What happened next, though, was a heartwarming step in the direction of progress.

u201cLast night, while out for Motheru2019s Day with our families (read: getting some late-night ice cream because treat yourself!) we noticed a group of rowdy bros gathered on a rooftop bar obnoxiously yelling u201cKISS HER!u201d in unison at every apparent couple that passed by.u201d

u201cItu2019s prom season here, so at that time of night youu2019ll see high schoolers in their formal attire. As we walked by the rooftop bros, an adorable teenage gay couple passed us in perfectly fitting midnight bue tuxes, matching pink ties, holding hands.u201d

u201cI looked at Alec (my boyfriend), my mom, my sister, and stopped to make sure the couple was okay as they walked by… worried that something might happen. The rooftop crew quickly switched from u201cKISS HER!u201d To u201cKISS HIM!u201du201d

u201cAfter some hesitation, the young men kissed… and let me tell you: both the rooftop crew and everyone else on the boardwalk just went absolutely wild for them and we all breathed a sigh of relief.u201d

It’s just one instance. But it is movement. And, as Del Moro notes, “it’s an encouraging moment for young LGBTQ folks out there.”

For the teens at the center of the story, the moment was worth every second.

You know how the internet works, so it won’t surprise you that the happy couple was immediately found, identified, and lauded for being out in a place where being authentically yourself can become dangerous.

They’re Theodore Vidal and Colin Beyers, boyfriends who couldn’t be more happy that things are changing in their town. 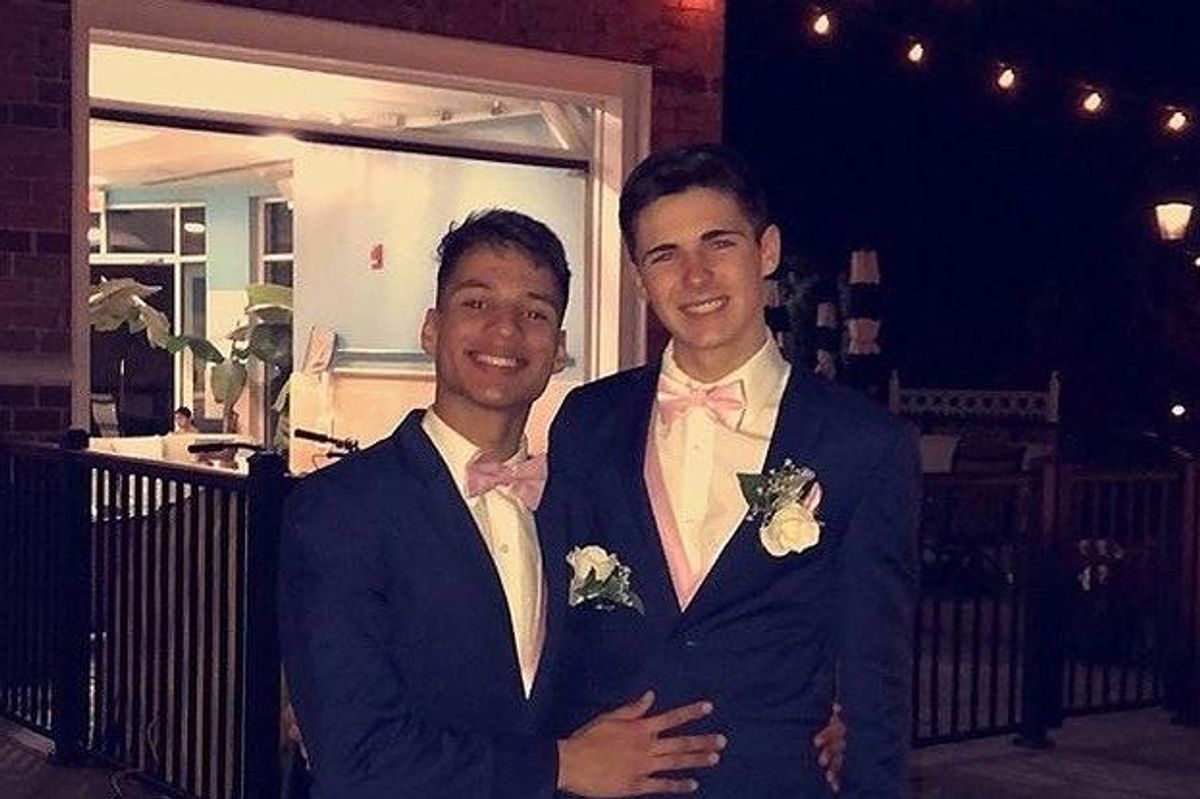 Speaking to BuzzFeed, Vidal, who revealed that he had been bullied after he first came out, said their encounter with the strangers on the rooftop was completely unexpected. “It was so surprising that these guys were supporting us,” Vidal said. “Especially after what I’ve gone through.”

“It’s an area where you normally would get discriminated against and the fact that those guys cheered us on was shocking,” Beyers told BuzzFeed. “It’s one of those small victories that makes the hard times worth it.”

Speaking with me over direct messages, Vidal said that all the positive attention had made him and his boyfriend feel “welcome in the world,” which is not always the case for LGBTQ youth. “It’s made such an impact on me.”

This is a reminder that things are getting better in small ways every day.

Admittedly, the story — however heartwarming — is still pretty problematic. Quick PSA to all dudes on roofs: Please stop screaming at people to kiss each other.

Catcalling is a bad idea regardless of why you’re doing it, and there’s no reason to put undue pressure on young people of any gender to kiss each other in public. And while this moment turned out great, it could have definitely been awkward or even upsetting.

That said, we shouldn’t let those imperfections take away from the fact that this story proves LGBTQ acceptance is making real strides against toxic masculinity and bigotry.

Personally, I’m looking forward to the day when gay couples can walk around without being jeered at or celebrated. In the meantime, though, this feels like a step in the right direction.

“It’s moments like what happened at Seaside that give me hope and make all the hardships worth it,” Beyers told me. “It’s funny, because we really didn’t do anything; all we did was be ourselves in front of some drunk people.”

Hey, that kind of bravery is often more than enough.