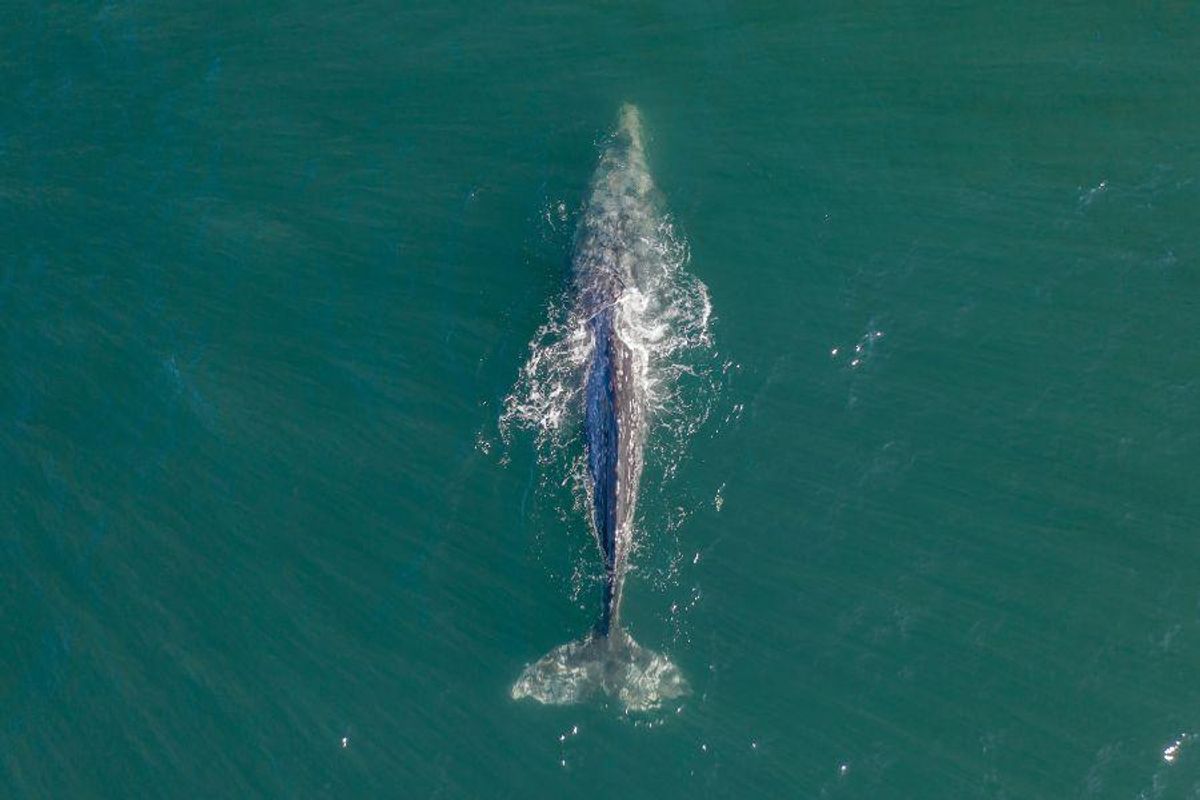 Seeing a whale in the wild can be a moving experience for many people. That’s why thousands of people pay money to go on whale-watching excursions, hoping to catch a glimpse of the gentle, majestic, intelligent creatures in their natural habitat.

Lucky whale watchers get to catch much more than a glimpse, and some even see a whale breach up close. But very, very few ever get to see anything close to what a recent group of tourists on a whale-watching cruise off Dana Point, California, got to witness.

Boats are required by law to stay at least 100 yards away from whales, but if a whale approaches a boat when it’s stopped, there’s not a whole lot a captain can do. Starting up the engine would just disturb it, so the best thing to do is just enjoy the encounter.

In this case, when a gray whale swam near a Capt. Dave’s Dana Point Dolphin & Whale Watching Safari tour boat, passengers and crew thought they might be witnessing something tragic. The whale was splashing about and was soon surrounded by blood in the water. Some speculated that maybe a shark or other predatory animal had attacked the whale.

As it turned out, they were witnessing the miracle of life—it was a mama giving birth to a baby gray whale.

Twitter user Jeremy Theisen shared a video of the event, and though it’s difficult to see what happens, you can hear the people on the boat wondering what was happening before it became clear.

Capt. Dave’s shared drone footage of the exciting moments after the birth as the calf learned to swim and the mama seemed to show off her newborn to those who witnessed the event.

“This is a first for all of us. We’ve never actually seen it happen,” Capt. Gary Brighouse can be heard saying, according to WXXI News.

“After surfacing, the newborn calf began learning how to swim and bonding with its mother. The female even brought the calf over to the boats as if to show off her offspring and say hello.

Gray whales prefer to give birth in the warm and protected lagoons of Baja California, Mexico. The lagoons offer safety from predators such as orcas, as well as warm water for calves who have not yet built up a thick layer of blubber.

Although some gray whales do give birth in Baja, there are times when calves just won’t wait and are born during the migration. Gray whales migrate annually along the U.S. west coast, swimming 10,000 to 12,000 miles round-trip. It is one of the longest migrations of any mammal. The whales travel from their feeding grounds in the Bering and Chukchi Seas near Alaska to the mating and birthing lagoons of Baja, and back again.”

Alisa Schulman-Janiger runs the Los Angeles chapter of the American Cetacean Society’s Gray Whale Census and Behavior Project, which tracks the migration patterns of whales along the coast. She told NPR that the footage of the birth and immediate aftermath was “astounding” and a windfall for researchers.

“The fact that you can see the blood pool means the calf must have just come out,” she said. “That isn’t something that is seen very often or documented often. In fact, I don’t know if there’s any other video footage of something like that.”

Schulman-Janiger explained how the mama whale was holding the calf up so it could rest and breathe and that they exhibited typical bonding behavior. She said she wished she had been there, adding: “It’s extraordinarily rare and really, really special for people to be able to share in those first few moments of a young whale’s life. A whale could get to be 50, 60, 80 years old. And this is just the beginning of that calf life.”

What an incredible thing to witness.