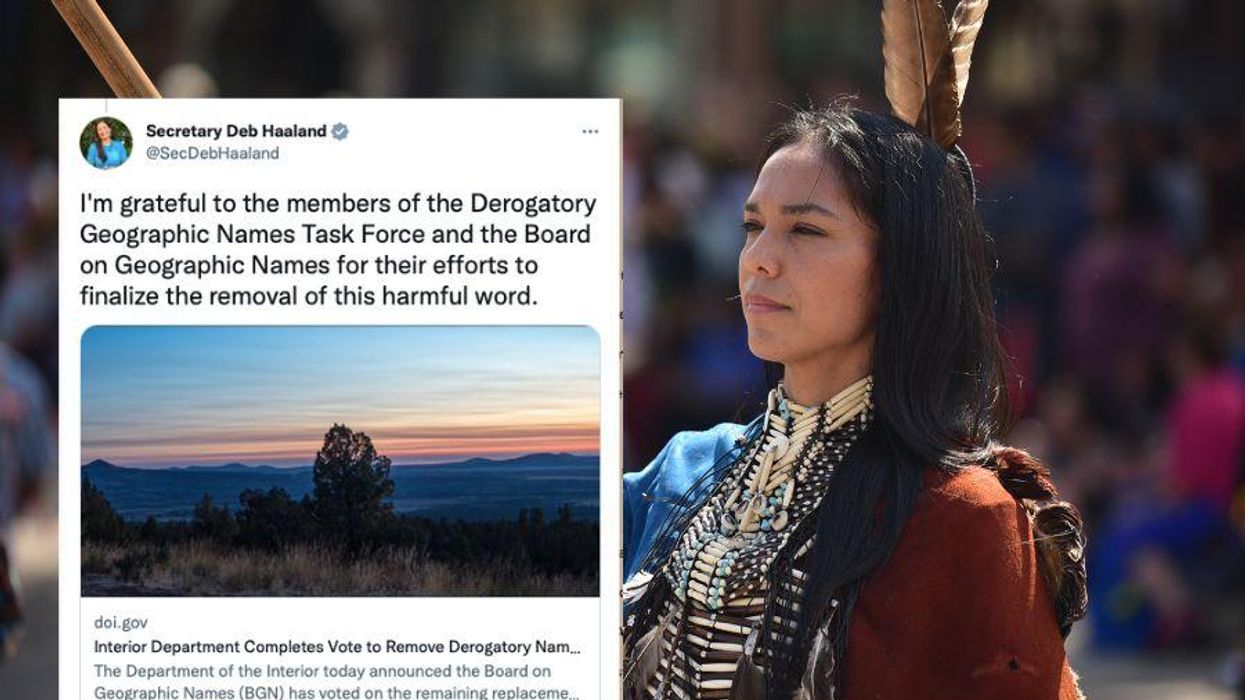 That’s the message from the Department of the Interior as it works to replace the names of public lands that are outdated at best and outright offensive at worst.

In November 2021, Secretary of the Interior Deb Haaland—the first Native American person to serve as a cabinet secretary in U.S. history—established a task force to review the names of the nation’s geographic features and replace the ones that include racist and derogatory terminology.

“Racist terms have no place in our vernacular or on our federal lands,” Secretary Haaland said at the time. “Our nation’s lands and waters should be places to celebrate the outdoors and our shared cultural heritage—not to perpetuate the legacies of oppression.”

One of the terms singled out for removal was “squaw,” which the department described as “an offensive ethnic, racial and sexist slur, particularly for Indigenous women.”

It has been a year-long process to change the names of more than 650 sites with derogatory names, and the final five sites containing the offensive term for Native American women have officially been renamed as of January 13, 2023, according to NPR.

The final five sites are located in California, North Dakota, Tennessee and Texas, and the names were changed in consultation with Native tribes and local communities. The five new names are as follows:

– One California site was renamed Loybas Hill, a name proposed by the Paskenta Band of Nomlaki Indians which means “young lady”

– Another California site was renamed Yokuts Valley, translating to “people.”

– At a North Dakota site, the name Homesteaders Gap was chosen to reflect local history.

– In Tennessee, a site was renamed Partridgeberry after a plant for which the community had been named previously.

– A Texas location was named Lynn Creek for a local resident named Isaac Lynn who lived on the nearby creek.

“Words matter, particularly in our work to ensure our nation’s public lands and waters are accessible and welcoming to people of all backgrounds,” Secretary Haaland said in a statement. “I am grateful to the members of the Derogatory Geographic Names Task Force and the Board on Geographic Names for their efforts to finalize the removal of this harmful word. Together, we are showing why representation matters and charting a path for an inclusive America.”

u201cI’m grateful to the members of the Derogatory Geographic Names Task Force and the Board on Geographic Names for their efforts to finalize the removal of this harmful word. https://t.co/zQzOTraF6iu201d

The renaming of sites is never without controversy, but it also isn’t new. As the Department of Interior pointed out, former the N-word was identified by the Secretary of the Interior as derogatory in 1962 and a policy was developed to eliminate its use. Additionally, in 1974, the Board on Geographic Names identified a derogatory term for “Japanese” and eliminated its use as well.

Some states have outlawed certain derogatory names, and we’ve also seen schools and sports teams changing their names and mascots to avoid culturally and racially offensive terms and imagery in recent years. Considering the long, storied and painful relationship between the U.S. government and Native American communities, these changes at the federal level are a move in the right direction.

Names matter—but the journey toward true equality doesn’t end there. As Crystal Echo Hawk, founder and Executive Director of IllumiNative, told Axios, “Changing racist names is a start, but we also need to transform how Americans see and treat Native people.”