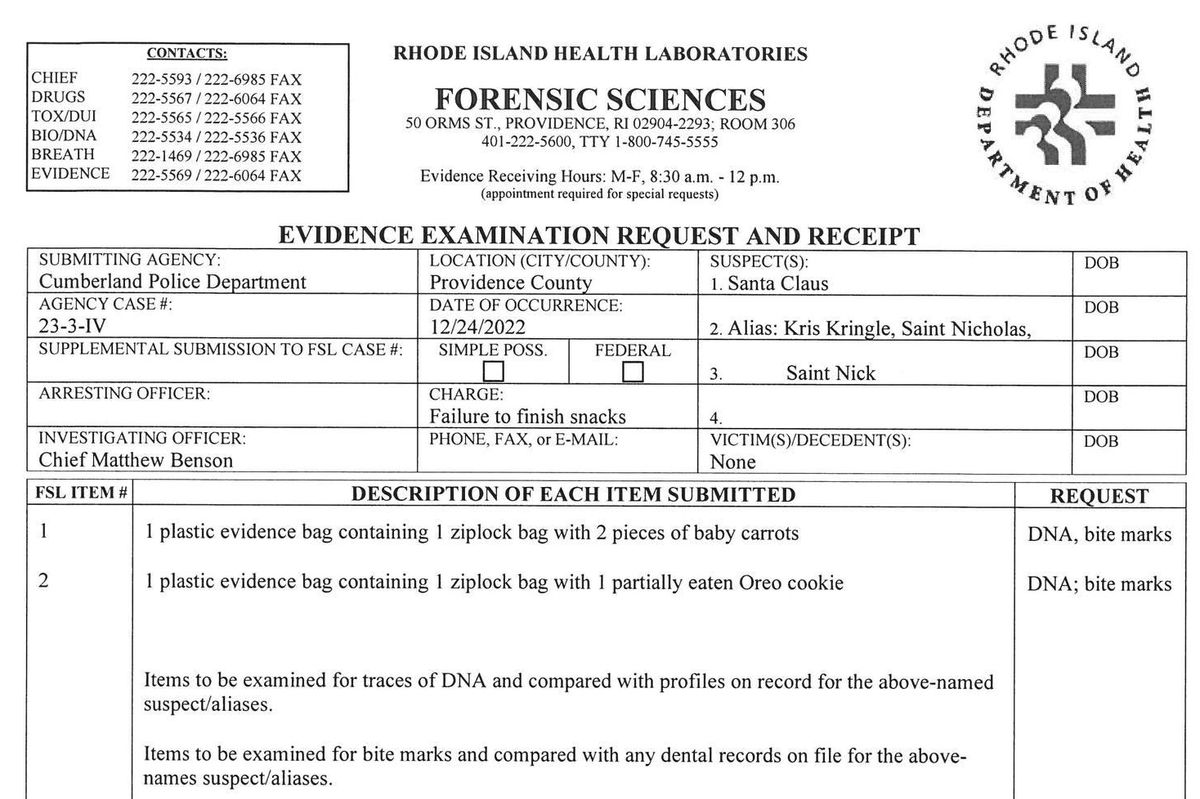 A 10-year-old girl from Cumberland, Rhode Island, had serious questions about whether Santa Claus is real and submitted DNA evidence to her local police to get the truth. On the morning of December 25, 2022, Scarlett Doumato collected a partially eaten cookie and carrots with bite marks and sent them to the Cumberland Police Department for testing, along with a handwritten note.

“Dear Cumberland Police Dapartment [sic], I took a sample of a cookie and carrots that I left for Santa and the raindeer [sic] on Christmas Eve and was wondering if you could take a sample of DNA and see if Santa is real?” Doumato wrote.

Cumberland police chief Matthew J. Benson was impressed by the child’s dedication to solving the mystery. “For her to take that initiative and to push that forward because she has a question that she wants answered, I just think was amazing,” Benson told Today.

The police department shared a photo of Doumato’s evidence, her letter and a statement on Facebook. 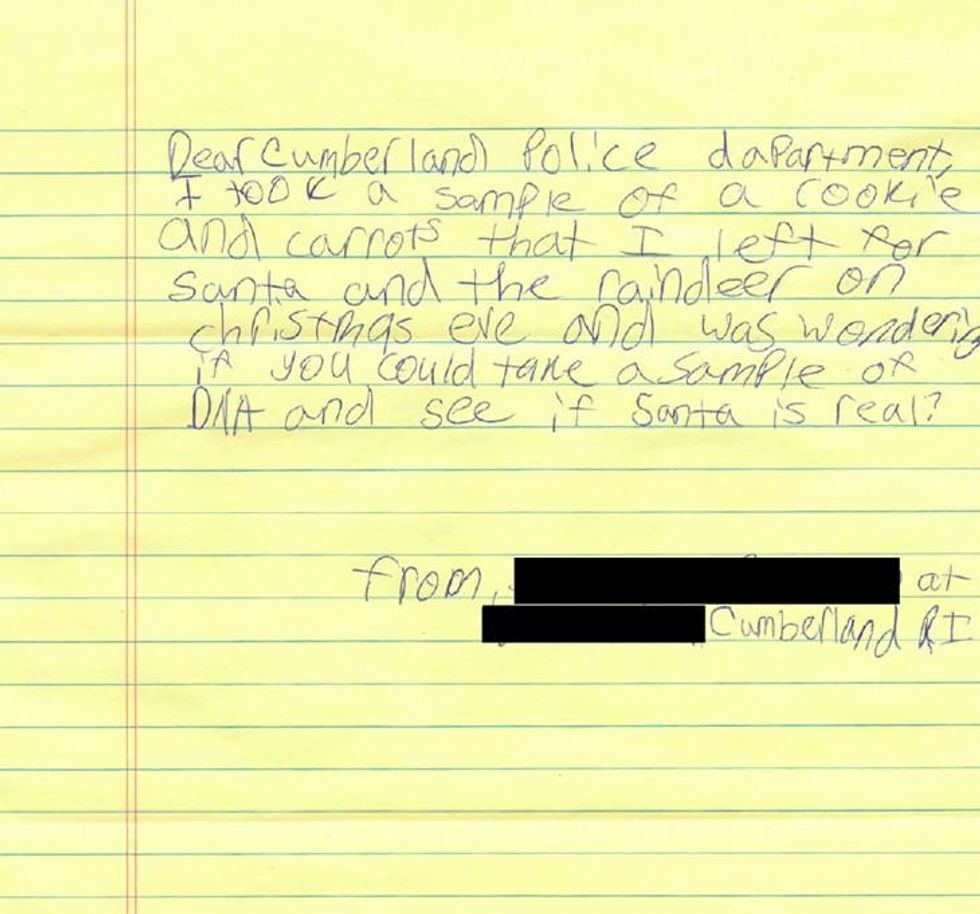 Doumato’s work collecting evidence at the scene of the crime was impressive, to say the least. “She did the work — she collected the evidence, she tagged it the right way,” Benson said. “She’s obviously watching the shows very intently. Separate baggies. She did it right by the book, so we’re taking it just as serious as she is.” 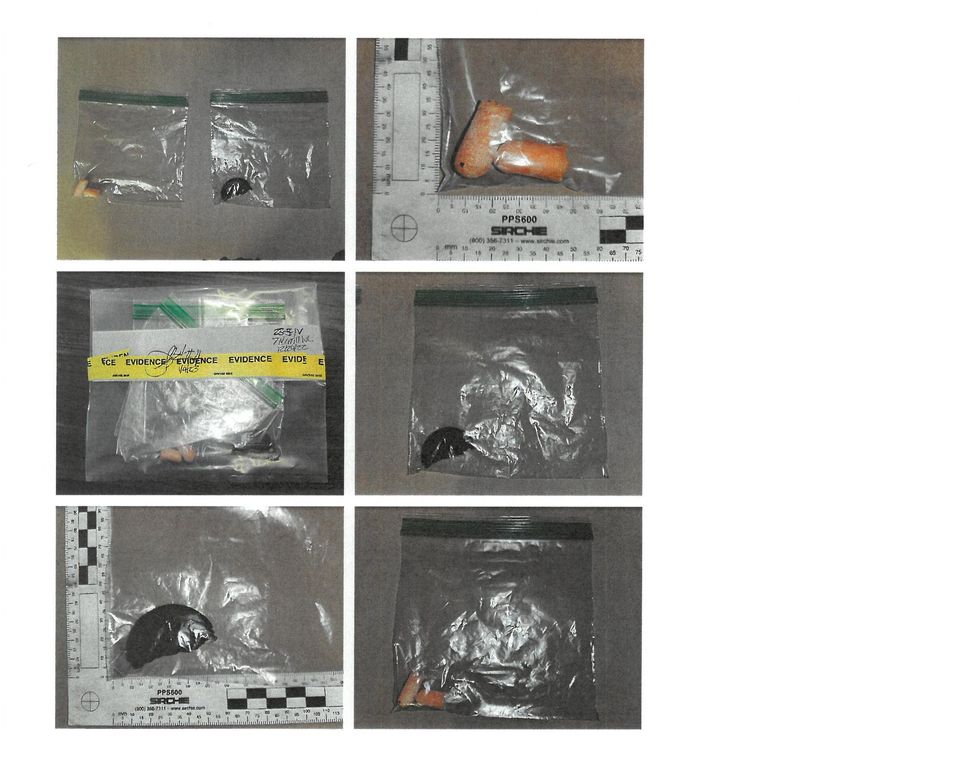 The Cumberland Police Department announced that after seeing her evidence it has launched a special investigation into the Santa inquiry.

The department shared in its press release:

“Earlier this month, a young investigator from the Town of Cumberland submitted the attached letter requesting a DNA analysis be conducted on the partially eaten cookie and carrot remains she acquired on the morning of December 25, 2022, for possible DNA evidence of Santa Claus (aka, Kris Kringle, aka Saint Nicholas, aka St. Nick) and/or one of his nine reindeer. As such, Chief Benson immediately instructed his Investigative Division to forward her evidence to the State of Rhode Island’s, Department of Health–Forensic Sciences Unit for analysis. Chief Benson noted, ‘This young lady obviously has a keen sense for truth and the investigative process and did a tremendous job packaging her evidence for submission. We will do our very best to provide answers for her.'”

u201cAWESOME NEWS: A 10-year-old girl in Rhode Island named Scarlett Doumato sent a letter to her local police, asking for a DNA test to prove Santa is real. She included a half-eaten Oreo, and some carrots that looked like they’d been gnawed on by reindeer. https://t.co/NbKvAwPWstu201d

The Cumberland Police added some additional evidence they collected on the night of December 24th. The most compelling evidence was a photo of a “reindeer” spotted in the area that night. 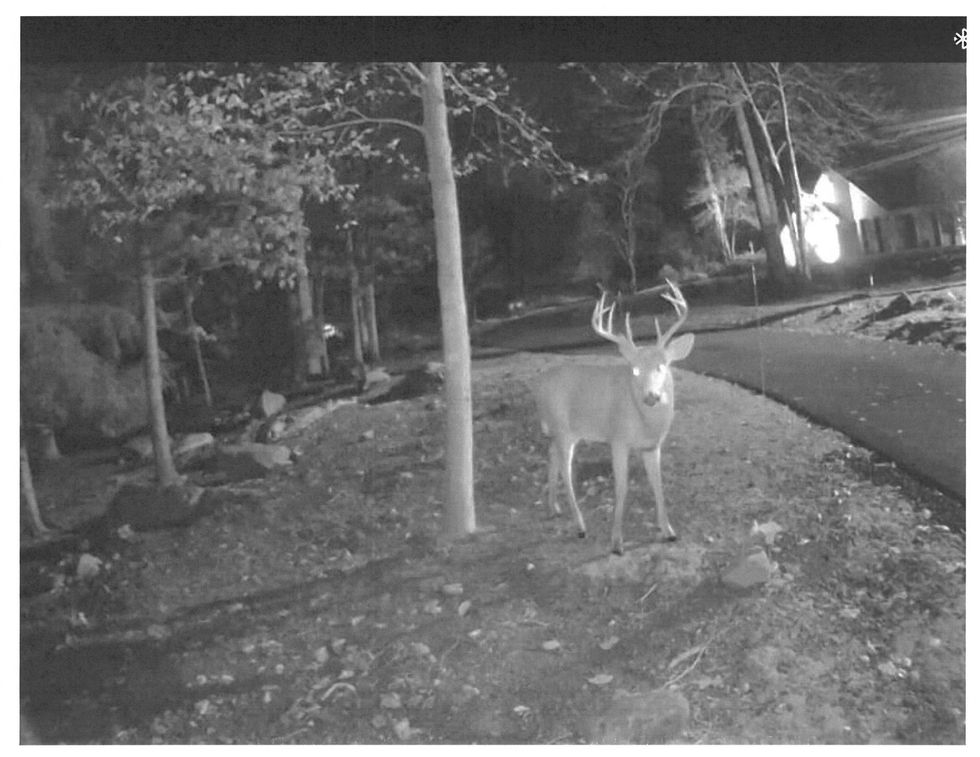 The girl’s mother was excited to see the police were taking her daughter’s inquiry seriously. “A giant thank you Chief Benson and the entire CPD! My Scarlett is going to be so thrilled that you are looking into her case!!!!!” Alyson Doumato wrote in the comments.

WJAR caught up with the young detective and learned that she has a Wacky Lab home detective kit sitting on her desktop. “I watch crime shows, and I thought it was like cool to be a detective,” she told the news outlet.

Her mother said that the investigation is just part of her nature. “She’s always a little bit skeptical, and looking for the facts,” Alyson Doumuto said.

The open case is still being pursued by the Cumberland Police Department.