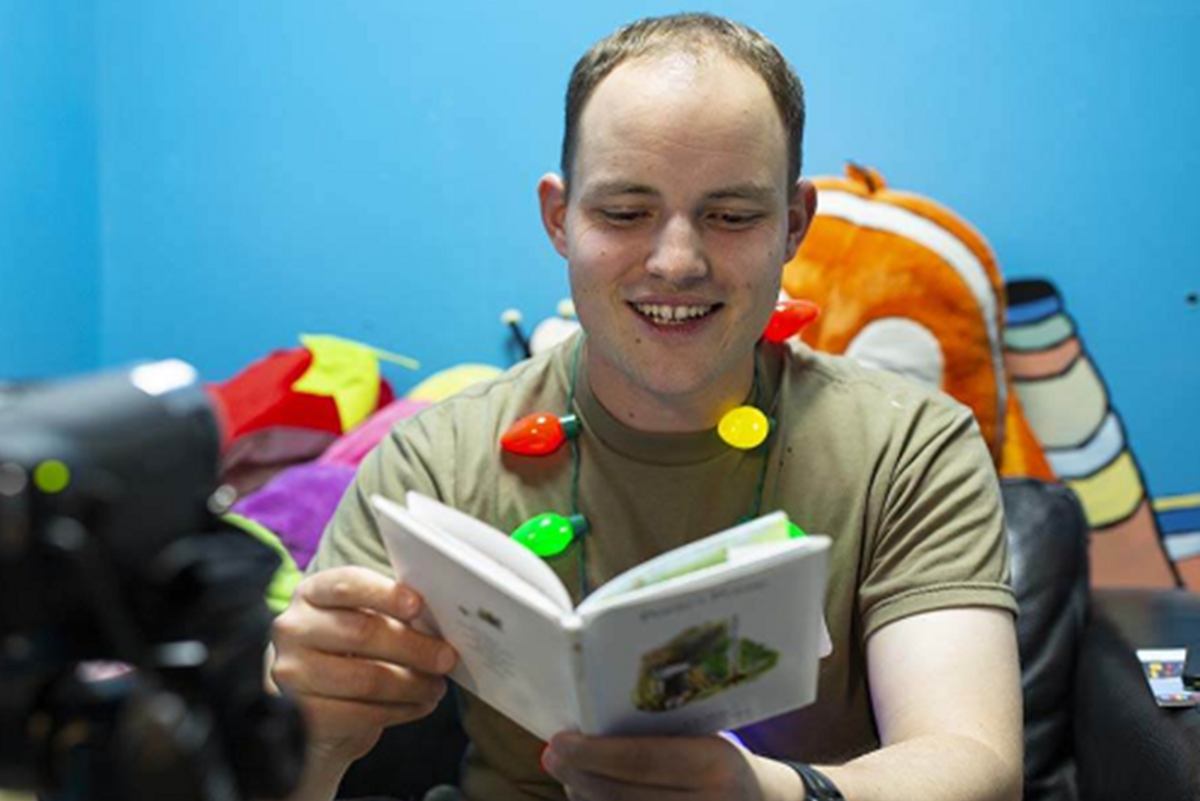 One of the biggest challenges deployed service members face is the feeling of being separated from their families, especially when they have children. It’s also very stressful for children to be away from parents who are deployed for long periods of time.

The program was created through a partnership between the Bob & Dolores Hope Foundation and the USO. Hope was one of the most beloved comedians of his generation, and he traveled the world for over six decades, putting on USO shows to boost the morale of the nation’s service members.

The program has been an incredible way for U.S. Army Captain Justin Meredith to connect with his young son Jayden and express himself creatively. Just before he was set to be deployed to the Middle East, he checked into the local USO center where he was introduced to the program. At first, he felt a little awkward in front of the camera but soon took a real shine to making the videos.

When he arrived, he became a regular at USO Camp Buehring in Kuwait where he’d show up every day to read a new book to his son. He began to really liven things up by adopting funny voices, wearing costumes, and using props.

“The zanier that I am on the camera and the goofier the voices, the characters, the props, the more he just really engages with it,” Justin said. “My son is so engaged, and he’s so happy and he lights up seeing me.”

Justin’s nightly readings to Jayden had a profound effect on the family by keeping them close while he was away.

Justin Meredith’s son and extended family members ended each day by listening to the latest book recording in their custom-made “Just-In-Time Center” while Justin was on deployment in the Middle East.via Courtesy Photo

“It became a life-changing thing, a better way to stay connected, and it was great because while my wife [was] technically raising him [while I was deployed], I could use the books to help influence and mold and help him out with some of the initial things that he’s going through,” Justin said.

Army Sgt. 1st Class Ruben Pimentel is a father of three and uses the Bob Hope Legacy Reading Program to connect with his family while he’s deployed. He loves that the recordings will live on long after he’s returned from his service overseas.

“I know I’m not there, but I’m able to connect with my family. Even when I’m 60 years old, I’ll be able to look back and see myself reading to my kids. It’s a family heirloom,” Pimentel said.

Sgt. Nick Masi reads a book to his four children while stationed in Afghanistan.via USO

The program is especially popular during the holidays. In 2019, the USO held a special event where service members read “The Night Before Christmas” in front of a festive, fake fire in a costume of their choice.

Sgt. Nick Masi, a father of four, thought the program helped him feel close to his loved ones during the holidays.

“It felt as though the reading program had transported me to be with my family, even if just for one story,” he said.

The USO had to temporarily shut down in-person events in centers last year due to the COVID-19 pandemic, but that didn’t stop service members from keeping the tradition of reading to their families alive. Service members who are USO volunteers at USO Erbil in Iraq outfitted the back of a pickup truck with a trifold to make a “room” for them to read to their families. 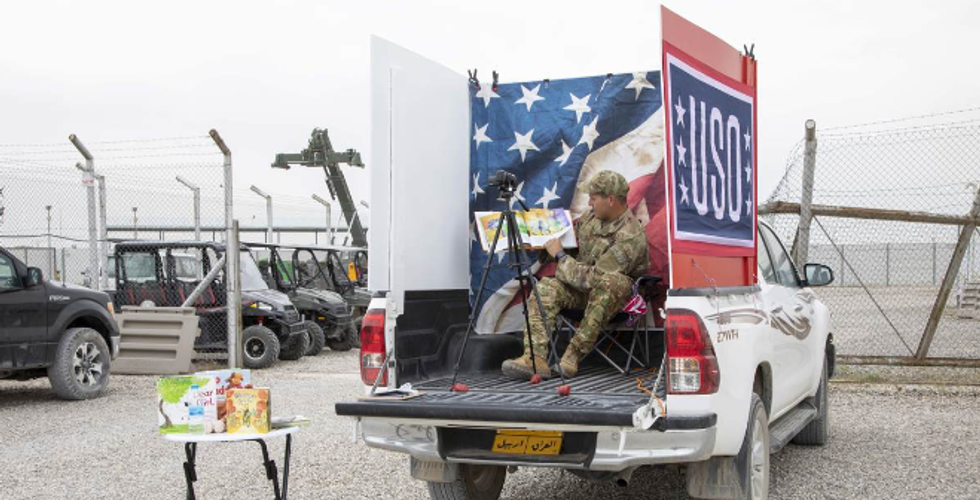 A service member reads a book to his child in the back of a pickup truck. via USO Erbil

The USO team decorated their makeshift set, grabbed some books, and set up a chair.

Then, they hit the road, sharing their studio with service members on-base, stopping at popular places as well as remote areas. The USO’s goal was to reach as many service members as possible.

Deployment is hard on service members and their families, but they do it so we can all enjoy peace and freedom at home. So, it’s our job to keep them as happy and comfortable as possible during their times of sacrifice.

Click here to see how you can contribute to the USO and support services like the Bob Hope Legacy Reading Program, which has helped over 100,000 service members and their families be together, or share a story, when they’re miles apart.