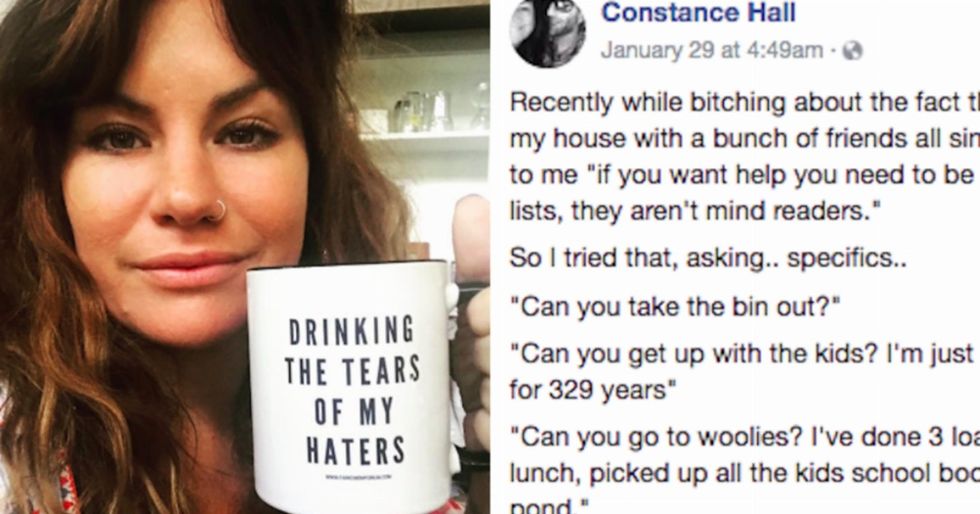 This article originally appeared on 08.27.18

It’s the 21st century, and as a civilization, we’ve come a long way. No, there are no flying cars (yet), but we all carry tiny supercomputers in our pockets, can own drones, and can argue with strangers from all around the world as long as they have internet access.

And yet women are still having to ask their partners to help out around the house. What gives?

Recently, Blogger Constance Hall went on a highly-relatable rant about spouses assuming responsibility for housework, and women everywhere are all, “🙌 🙌 🙌 .”

Recently while bitching about the fact that I do absolutely everything around my house with a bunch of friends all…
Posted by Constance Hall on Monday, January 29, 2018

Recently while bitching about the fact that I do absolutely everything around my house with a bunch of friends all singing “preach Queen”, someone said to me “if you want help you need to be specific… ask for it. People need lists, they aren’t mind readers.”

So I tried that, asking.. specifics..

“Can you take the bin out?”

“Can you get up with the kids? I’m just a little tired after doing it on my own for 329 years”

“Can you go to woolies? I’ve done 3 loads of washing and made breaky, lunch, picked up all the kids school books, dealt with the floating shit in the pond.”

And yeah, she was right… shit got done.

But I was exhausted, just keeping the balls in the air.. remembering what needs to be asked to be done, constant nagging..

And do you know what happened the minute I stopped asking…?

And so I’ve come to the conclusion that it’s not your job to ask for help, it’s not my job to write fucking lists.. We have enough god dam jobs and teaching someone how to consider me and my ridiculous work load is not one of them.

Just think about each other, what it takes to run the god dam house. Is one of you working while the other puts up their feet?

Is one of you hanging out with mates while the other peels the thirtieth piece of fruit for the day?

Is one of you carrying the weight?

Because when the nagging stops, when the asking dies down, when there are no more lists….

All your left with is silent resentment. And that my friends is relationship cancer..

It’s not up to anyone else to teach you consideration. That’s your job.

Just do the fucking dishes without being asked once in a while mother fuckers.

Hall’s post touches on the concept of emotional labor, which can be defined as “the process of managing feelings and expressions to fulfill the emotional requirements of a job.”

In other words, although Hall’s partner may be the one carrying out the tasks she assigns him, it is still Hall’s job to be the “manager” of the household, and keep track of what things need to get done. And anyone who runs a household knows that juggling and keeping track of chores is just as exhausting as executing them.

At time of publication, Hall’s post was shared nearly 100,000 times. That’s a lot of frustrated ladies!

When your girl Far Kew sends you the perfect present. You will find this and more cunty cups on her facebook page 👌🏽
Posted by Constance Hall on Thursday, November 30, 2017

Women in the comments section seemed to overwhelmingly agree with Hall’s post.

Let’s all learn to share the load…laundry and otherwise.